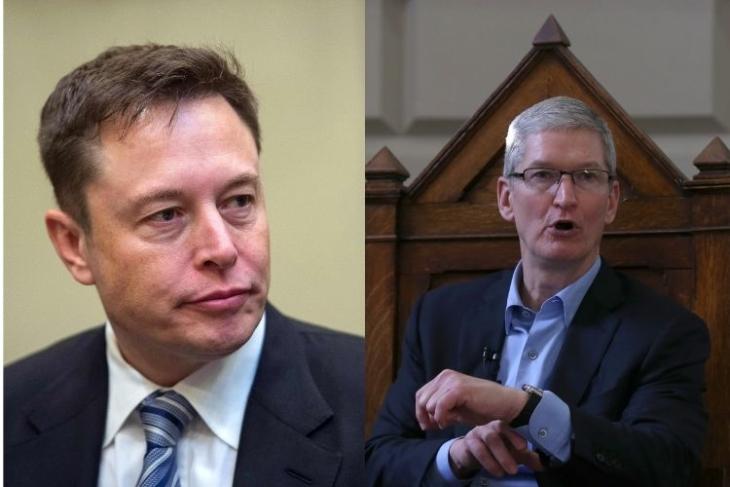 An online drama relating to Elon Musk? Well, that has become a regular on Twitter. So after the recent release of a book about Musk’s EV company Tesla, a new controversy arose between Elon Musk and Apple chief Tim Cook. So, buckle up, grab some popcorn, and enjoy the spicy drama between two rich men of the Big Tech world.

So, it all started when Tom Higgins, a Wall Street Journal tech and auto reporter, published his new book about Tesla and its rise in the industry. Following the release, Los Angeles Times published an in-depth review of the book. In the review, LA Times writer Russ Mitchell started with an anecdote from the book that is about an alleged call between Musk and Cook.

It was about the time in 2016 when Tesla was struggling financially and Musk reportedly wanted to sell the company to Apple for 1/10 of its value. However, as per the review, Higgins’ book tells a different story.

In the book, Higgins wrote that in an alleged call between the two CEOs, Apple offered to acquire Tesla to bring out the company from its financial troubles. As per the book, Musk agreed but on one condition. The Tesla CEO allegedly said that he wanted to become the CEO of Apple after the acquisition, to which Tim Cook replied with a loud “F*** you” and hung up the phone.

Now, if you recall, the story of Apple buying Tesla was first reported by Bloomberg’s Mark Gurman late last year. In his report, Gurman wrote that although Musk wanted to meet Cook in person to discuss the deal, the Apple CEO refused to meet Musk. It was also confirmed by Musk in a tweet at that time.

Following the review of Power Play, Gurman shared a tweet citing a Daily Mail report about the review. Later, he shared another tweet citing an interview of Tim Cook with Kara Swisher, in which Cook stated that he has “never spoken to Elon” neither on the phone nor in person.

Musk, on the other hand, saw Gurman’s tweet as a platform to criticize Higgins’ book. The Tesla CEO wrote that “Higgins managed to make his book both false *and* boring” followed by two laughing emojis. Later, in another reply to BBC reporter James Clayton, Musk confirmed that Cook and he has “never spoken or written to each other ever.”

Cook & I have never spoken or written to each other ever.

There was a point where I requested to meet with Cook to talk about Apple buying Tesla. There were no conditions of acquisition proposed whatsoever.

He refused to meet. Tesla was worth about 6% of today’s value.

So, did the phone call between the two CEOs happen back in 2016? Well, that remains a mystery as of now. However, it is worth mentioning that the book by Higgins does criticize Musk’s contribution to Tesla and picturizes him as a “dramatic foil to those doing their best under chaotic, dysfunctional conditions.” Moreover, the review by LA Times does not state the source of the anecdote in the book. What do you think about this whole phone-call controversy? Do let us know in the comments below.