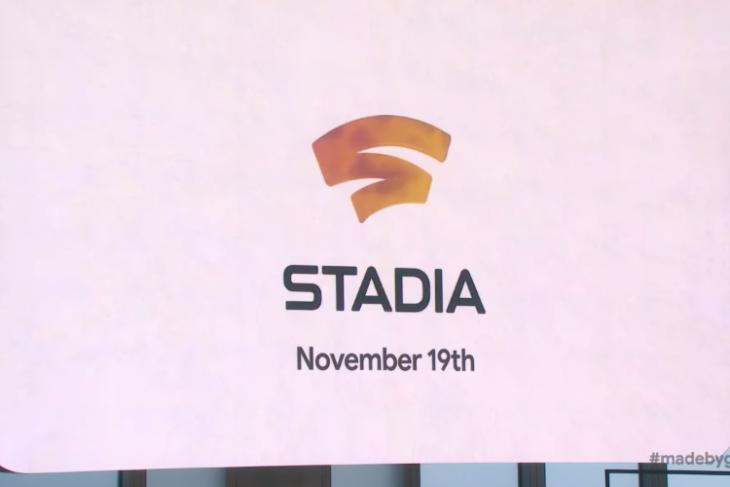 Though we gathered to witness Google unveil its new hardware devices at the “Made by Google” event in New York, the company officially revealed the launch date for its game streaming service Stadia. And well, if you’ve been waiting to play PC games on a mobile phone, Chromebook or Chromecast-enabled TV, Stadia will become available from 19th November.

To start with, the company allowed interested users to order either the Stadia Founder’s Edition or Premiere Edition packages. Both of these will include a Chromecast Ultra and Stadia Controller, which when coupled with three months of Stadia Pro, will let you play Destiny 2 in up to 4K HDR with 5.1 surround sound right away.

In its official blog post, Google says that “Stadia Founder’s Edition will start arriving on gamers’ doorsteps on November 19, 2019. If you were one of the first gamers who pre-ordered and have received your Founder’s Editions, you’ll be able to buy and play your favorite games beginning at 9AM PST/5PM BST/6PM CET on November 19.”

While what’s quoted above is true, Google further adds that pre-order packages will be shipping in the same order they were received. Gamers will receive an e-mail when the package ships, followed by the code to activate both the Stadia account and Stadia Pro subscription.

Well, if you’re someone who’s eager to try out Stadia on launch day, then don’t forget to check out this super helpful video to get you started:

Want to know everything about Google Stadia? We already have an in-depth resource on this topic and you can find it attached right here. We will soon bring you the complete list of games including Mortal Kombat 11, Red Dead Redemption 2, and more later during the week.