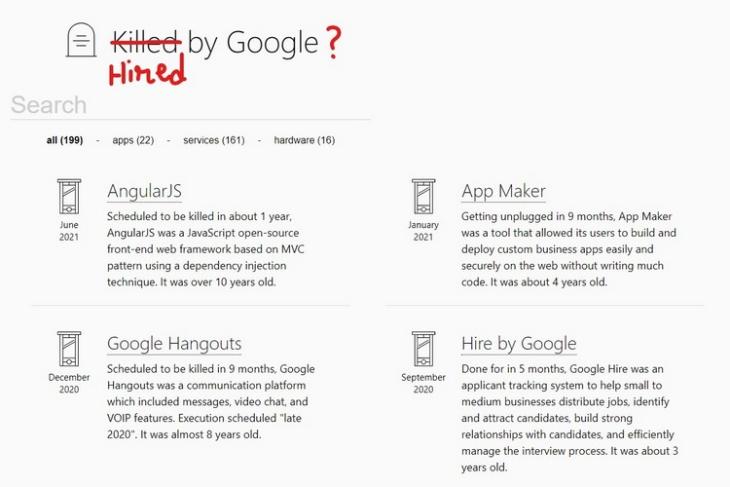 If you think Google funds some great projects around the world, then you probably don’t know about the website, “Killed by Google”. It is basically a graveyard for all the apps, hardware and services that the Mountain View-based tech giant “killed” over the years. Now, the company wants to hire the developer who created this website.

Cody Ogden is a website developer from Minneapolis. He created the “Killed by Google” website back in 2018 to showcase all the things that Google has shut down and discontinued over the past decade. You’ll be surprised to find out that there are a total of 199 projects that Google has killed off. The list includes apps, hardware and services which dates back to 2006.

Now, Ogden recently tweeted a screenshot (below) of an email that was sent to him by a Google representative. In the email, the website creator got a job offer from the tech giant as his “experience lines up with some of the opportunities” they have in the Bay Area.

Someone at @Google finally contacted me.

How should I respond, @QuinnyPig? pic.twitter.com/9iPpUDgXZ7

However, it seems that Cody is not at all interested in working for the project-killing corporate. As a joke, he created a poll (below) in Twitter asking his followers for the “possible responses” for the email. Later, Ogden also tweeted that the only “experience” that he could have for this “opportunity” is disappointment.

Well, it is only fair for the creator for turning down the job opportunity. Just think about it, if Google hires him just to fire him sometime later, the “Killed by Google” creator will be “killed” by Google! Oh, the irony.