In the recent past, Google has added a host of new features to Google Maps targeted at Indian users such as ‘two-wheeler mode‘ and ‘plus codes‘, with many other like the addition of public toilets and real-time bus transit info currently under development. Google has now introduced another India-first feature in Google Maps for Android that will allow commuters in Delhi to see auto rickshaws under the “public transport” mode in Maps.

By selecting the mode, commuters will be able to view suggested routes for the ride as well as the estimated auto-rickshaw fares, making it easier for them to plan their trips, Google said in a statement. The new feature can be found within the “public transport” and “cab” modes in Google Maps and is based on the expected trip route and the official fare model shared by the Delhi Traffic Police. 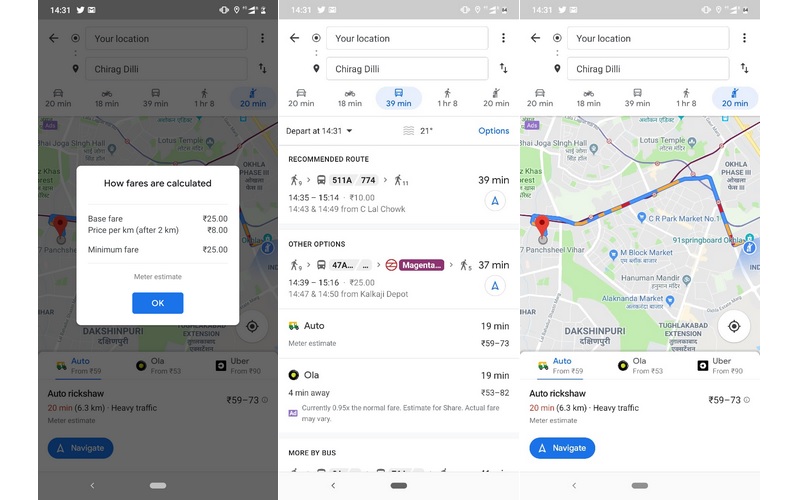 “Currently, for an unfamiliar journey, commuters often overpay and don’t have an idea about the distance or best route. The feature will also help the users plan their journey better, so they could look at the expected cost of the auto-rickshaw ride and decide whether they want to take it all the way, or perhaps take a different mode of transport instead,” explained Vishal Dutta, Product Manager, Google Maps.

Google, however, did not reveal whether the feature, currently available in Google Maps app for Android devices, will be rolled out to other cities in the near future. To use the feature, update Google Maps to the latest version. Open the app, search for a destination, then tap on directions and go to the public transport tab. Commuters will be able to see the auto rickshaw result in the “Also Consider” section.

After choosing the mode of transport (auto-rickshaw icon) on the screen, you can see the estimated price of the journey and the route’s traffic information. Then tap ‘Navigate’ to start the trip. The same option can also be accessed via the “cab” mode on Google Maps, said the company.