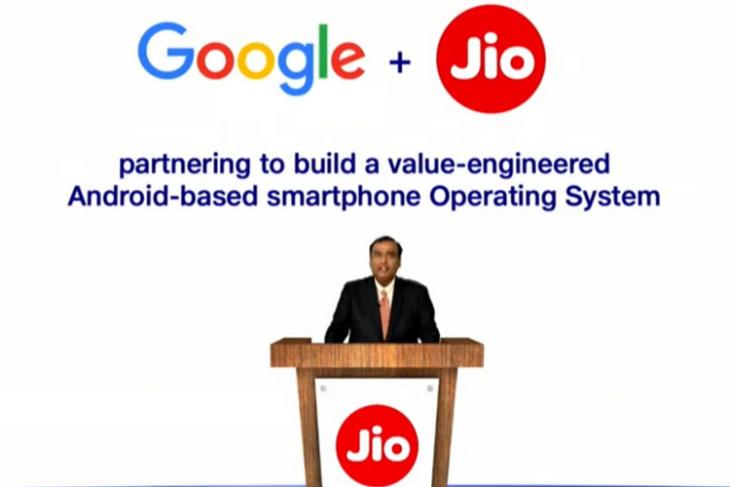 At its 43rd AGM today, Reliance Industries made of slew of announcements, including some that were right out of left field. The company also announced extensive collaboration with Google in areas of affordable 5G Android smartphones. Google, of course, is investing $4.5 billion (~Rs. 33,737 crore) in Jio Platforms for a 7.7% stake, but that’s just the beginning.

As part of the partnership, the two companies will work on “affordable 5G smartphones” for India. According to Reliance Industries chairman, Mukesh Ambani, the company can design an entry-level 5G smartphones “at a fraction of their current cost”. Towards that end, Google and Jio are partnering to build an Android-based smartphone operating system. “Though this partnership, we’re confident that we can accelerate the national mission of putting a smart device in the hands of every India”, he said.

According to Ambani, the tie-up will help the country ditch its legacy 2G networks and transition millions of 2G feature phone users to entry-level 4G/ 5G handsets. “As India is standing at the doorsteps of the 5G era, we should accelerate the migration of 350 million Indians, who currently use a 2G feature phone, to an affordable smartphone”, he said. “Jio is determined to make India 2G-free”, he added.

On his part, Google CEO, Sundar Pichai, said that he was excited about how the partnership will help bring smartphones within the reach of hundreds of millions more Indians. “I am excited that our joint collaboration will focus on increasing access for hundreds of millions of Indians who don’t currently own a smartphone while improving the mobile experience for all”, he said.