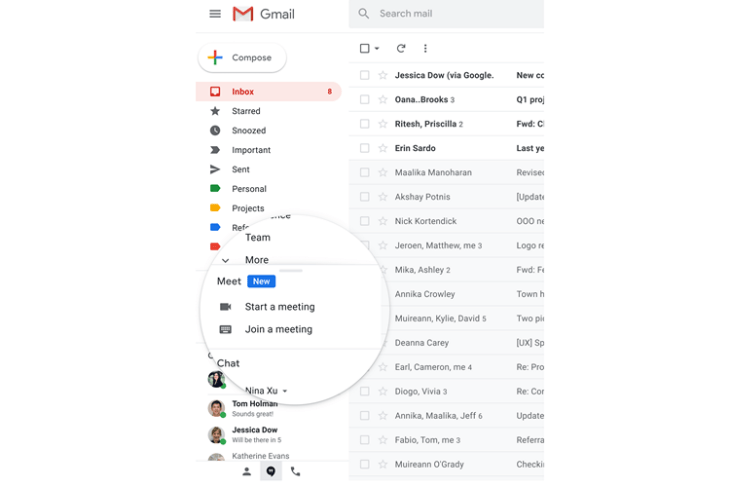 After rebranding Hangouts Meet and Hangouts Chat to Google Meet and Google Chat, respectively, earlier this week, Google has now integrated the former into Gmail for its G Suite customers in the enterprise and education sectors. The new feature, which started rolling out on Thursday, will enable both business and education users on Gmail.com to directly take calls on Google Meet, the company’s vice president, Javier Soltero, told Reuters. He also said that the service will soon support video conferences with up to 16 participants simultaneously.

Following the change, Google Meet, the company’s G Suite video conferencing tool, will be available in Gmail, allowing users to start and join meetings right from their inbox, making it easier than ever to stay connected. Do note that the feature is currently only available on the Gmail website, but Google says that it will be ‘coming soon’ to the mobile apps as well.

Meanwhile, the feature will be available for all G Suite users, but Google says it will be up to the admins to turn it on or off. It will be ON by default for all domains with video calling enabled, but admins will have the power to disable Meet either by turning off video calling in the Admin console, or by turning off the Hangouts Meet and Google Hangouts service. Opting for the second option, however, will turn off classic Hangouts as well.

With more and more people working and learning from home, Google says that the integration will make it easier for users to connect and keep things moving forward. “With Meet in Gmail, you can easily start or join a meeting in seconds. Our goal is to help you follow the flow of the day, seamlessly switching between email and video meetings—whichever form of communication you need”, the company said in an official post.