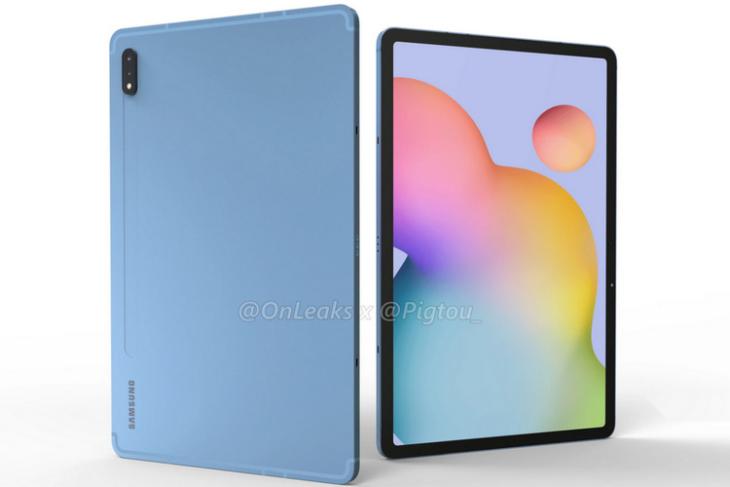 Serial tipster, Steve H. McFly (aka @OnLeaks), has shared a few hi-resolution renders of what he claims to be Samsung’s upcoming Galaxy Tab S7. Visually, the device seems to be similar to the Galaxy Tab S6 released last year. It will reportedly sport a dual-camera setup at the rear and have uniform thin bezels up front. Interestingly, the cameras seem to be accompanied by an LED flash, something that is missing in the Tab S6.

The renders, meanwhile, do not show the S Pen stylus that is said to be a part of the package. However, there does seem to be a long, thin groove at the back, where it will likely attach magnetically – the same as the Tab S6.

Either way, @OnLeaks didn’t reveal any more info about Samsung’s next-gen flagship tablet. And from the looks of its, it’s as bland and boring as its predecessor. Still, it will most likely be crowned as the best Android tablet around in 2020. Also, multiple leaks in recent days have given us an idea of what to expect from the device.

The Galaxy Tab S7 is expected to be launched on August 5 alongside the Galaxy Note 20 series and Galaxy Fold 2. It will apparently be a slightly toned-down version of the Tab 7+, which is also rumored to be launched on the same day. The device will reportedly feature an 11-inch display, most likely AMOLED.

It’s most likely going to be powered by the Snapdragon 865, coupled with up to at least 8GB of RAM and up to 256GB built-in storage. It is also said to come with a 7,760mAh battery.

Both of those are a step down from the Tab S7+, which is said to feature a 12.4-inch Super AMOLED screen and boasts a 10,090mAh battery pack. The larger device also received its Bluetooth certification this week, hinting at its imminent launch. Either way, you can feast your eyes on the Galaxy Tab S7 renders above.