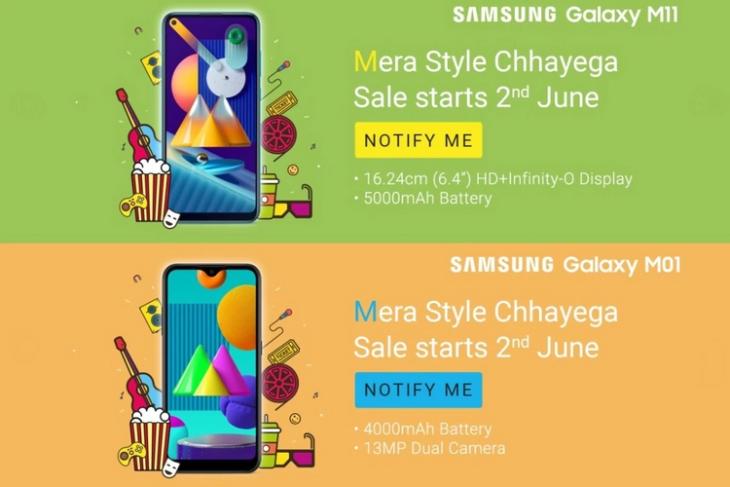 Samsung is in the final round of preparations to launch the Galaxy M11 and the Galaxy M01 in India. The South Korean tech giant will launch both of these handsets on the 2nd of June, as per Flipkart teasers.

Samsung launched the Galaxy M11 – the successor to the Galaxy M10s this March in UAE. Hence, we already know all the specifications of the handset.

The handset draws juice from a massive 5,000mAh battery that supports 15W USB-C fast-charging. It will be available in Black, Metallic Blue, and Violet color variants.

On the other hand, the Galaxy M01 is rumored to sport a 5.7-inch HD+ LCD display with a 1520×720 pixel resolution. We could expect Snapdragon 439 chipset, 3GB of RAM, and 32GB of internal storage in the device. The teaser reveals that Samsung will be using a waterdrop notch on the Galaxy M01.

There is no word on the pricing of the handsets but they’re rumored to be launched around the Rs.10,000 mark. The wait is fortunately not long as the launch event is merely a couple of days away from now.