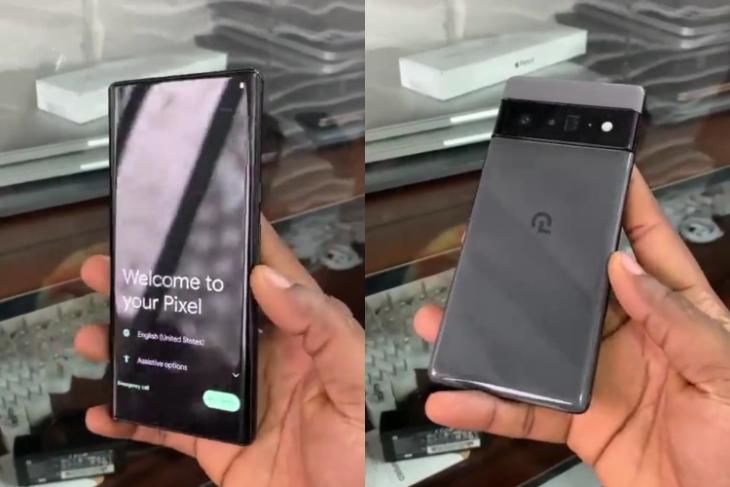 Ahead of the potential release of Google’s upcoming flagship Pixel 6 series, we have seen various leaks and rumors about the Pixel 6 and 6 Pro circulating online. Although previous leaks (and Google’s official store) show the Pixel 6 and 6 Pro in images, a video on Twitter shows the Pixel 6 Pro in the real world for the first time. And well, it looks ready to take on the mighty Android flagships out there.

Shared by a Twitter user named M. Brandon Lee, the 8-second hands-on video showcases the Pixel 6 Pro’s design and gives us a 360-degree view of the device. You can check out the tweet along with the video right below.

As you can see here, the video shows the all-black Pixel 6 Pro in the hands of a person. The device looks legit, with the same design and the horizontal strip-camera module that Google officially showcased earlier this year. Also, you may notice the screen is curved at the edges. It will be interesting to see how the users react to that. However, the Google logo at the middle of the glossy back panel is absent.

In the tweet, Lee addressed this issue and mentioned that the unusual logo indicates “that this is likely an early production test unit” of the Pixel 6 Pro. So, as per reports, the device in the video could be a Production Validation Testing (PVT) unit. In other words, it is essentially a prototype of the actual device that will release in the market soon.

Now, although the video shows the device in all its glory, it does not reveal any key specs or features of the Pixel 6 Pro. However, by this time, various leaks have suggested some of the key features of the upcoming Pixel devices.

However, we shall know the official specs, features, and price of the upcoming Pixel 6 devices once Google releases the device at a dedicated event slated for next month. So stay tuned for more information.