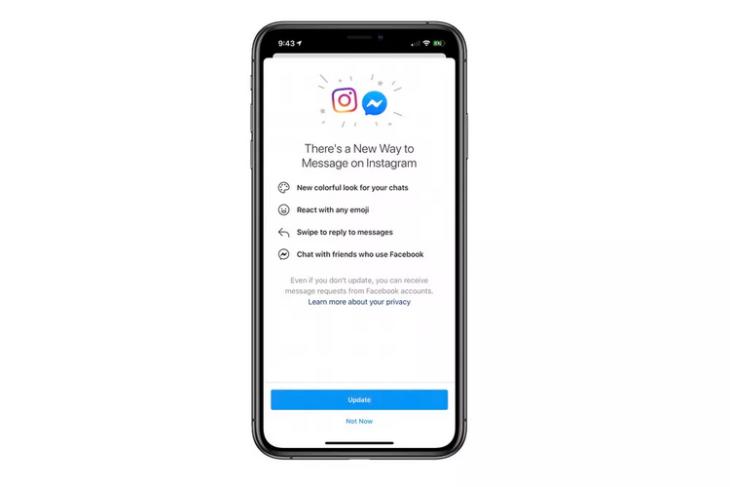 Facebook has long been working on its plans to integrate Messenger, WhatsApp and Instagram chats. The first reports about a possible merger between the three services came as far back as in January 2019, but nothing much has changed for end-users since. However, that might be changing pretty soon if a new report from The Verge is anything to go by. According to the report, Facebook has started taking the first steps towards rolling out an integrated chat system for Instagram and Messenger.

Apparently, an incoming Instagram update is promising select users “a new way to message on Instagram”. The biggest new feature addition in the new update is the ability to “chat with friends who use Facebook”. The message also lists a bunch of other features, including a “new colorful look for your chats”, more emoji reactions and swipe-to-reply. The update is apparently available on both Android and iOS.

Once updated, the Direct Messaging logo at the top-right corner on Instagram is replaced by the Messenger logo. However, the feature still seems to be a work-in-progress, as it’s still not possible to message your Facebook friends from Instagram. That, however, will very likely change in the coming days with Facebook flipping on a server-side switch to implement the change. Facebook is yet to comment on this publicly.

In case you’re wondering, Facebook owns both Instagram and WhatsApp, having acquired both of them from their respective founders over the past decade. While it paid $1 billion to buy Instagram in 2012, the WhatsApp acquisition proved significantly more expensive, with the social media giant reportedly paying a whopping $19 billion to acquire the popular instant messaging platform in 2014.