RCS, the next generation of SMS protocol, finally seems to be coming to users. Boasting a slew of notable features like high-res photo & file sharing, secure payment, location sharing, and more, Rich Communication Services has got enough impressive goodies to replace the old-fashioned SMS messages with a richer and more versatile text-message system. That said, RCS (also known as SMS+) is still embroiled into a rather complicated career and its dependency on carriers is preventing the advanced messaging from being available to everyone across the world. Thankfully, that’s changing a little bit and if your device is compatible, you can get RCS messaging on your Android device. Even if your phone carrier doesn’t support this, there is a workaround that can help you activate RCS. So, without further ado, let’s see how you can enable RCS on your Android device.

How to Enable RCS Chat on Your Android Device

As promised, Google is rolling out RCS in several countries around the globe. Unfortunately, what seems to be preventing it from achieving the full potential is not the shortcomings (more on them later) but the lack of straightforward roll-out policy. A case in point, in many parts of the world including the United States, an Android device user must be on a carrier that supports the RCS Universal Profile like Google Fi. Though the search giant is slowly but steadily providing RCS chat services directly to Android users in some countries ( i.e the UK and France), the days for the direct rollout of this advanced messaging system across the globe still seem far away at least for now. Anyway, whether you have a supported Android phone or your device is yet to get lucky, we have got you covered.

Get RCS Chat in Google Messages on Supported Android Phones

2. Now, tap the three dots in the upper-right corner and choose Settings. 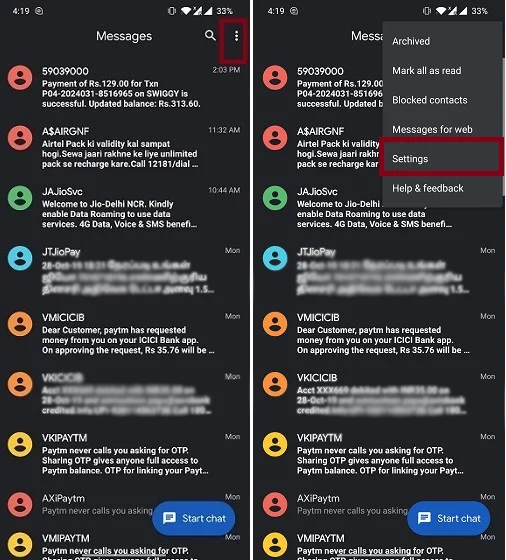 3. Next, tap on General and then Chat Features. 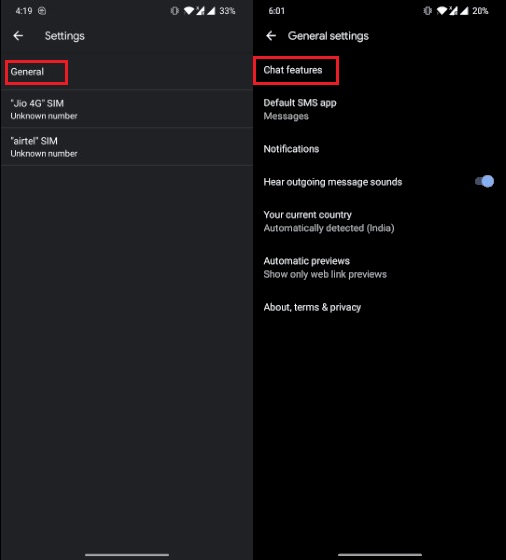 Note: In some single SIM devices (or dual SIM devices in which you are using only a single SIM card), “Chat features” option is showing right inside the “Settings” page. In those cases you won’t need to go inside any General option.

4. Now, the app will automatically verify your number for RCS and enable it once approved. In dual SIM devices, you might be asked to enter your number. 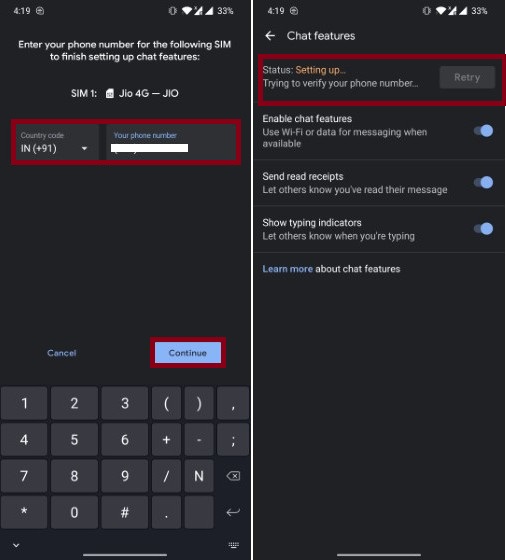 That’s it! Now, wait for a few seconds until Google Messages has verified your phone number. When it’s done, the status will change from Setting up to Connected.

Enable RCS Messaging on Any Android Phone Regardless of Carriers

As mentioned above, even if you don’t have a compatible device, you can still put your hands on the RCS chat thanks to a team of Redditors who have come up with this method. But before going ahead with the process, make sure to fulfill the requirements upfront.

Get the Requirements Upfront

2. Now, tap on Recent Activities and select All Activities.

3. Next, scroll down to the list to find “Android Messages” and tap on it. And then, choose Set RCS Flags.

4. Right under the ACS URL section, choose ‘“http://rcs-acs-prod-us.sandbox google.com/.” And then, tap on Apply.

5. Now, launch the Messages app on your Android device. Voila! The RCS chat setup would be waiting for you. Now, you can ideally set it up in a few minutes (roughly around three minutes). Get it done and you will then be able to chat using a ton of impressive features. As mentioned above, you can enjoy sharing rich messages with anyone who has an Android device.

Note: Just in case, the trick didn’t work for you, clear the data of Carrier Services from the Settings app and then force kill the Android Messages. After that, repeat steps 1-3.Next, choose OTP Pattern and tap on Your\sMessenger\sverification\scode\sis\sG-(\d{6} in the menu. After you have successfully completed the process, you can head over to Settings > Chat Features > Status to check whether it’s activated or not. If it’s enabled, the status should appear as “Connected”.

So, What are the Pros of RCS Chat?

Touted as the advanced messaging, RCS chat appears to be a true SMS/MMS successor. Being part of a broader IP multimedia subsystem, it is a more efficient text-message system. Moreover, it’s versatile, can transmit in-call multimedia and also offers phonebook polling (designed for service discovery).

Other notable features include real-time delivery, read receipts, and being able to get the indication when other people are typing the message. But what has made me want this new-age text-message system is the ability to attach large video files and high-quality photos. As someone who loves sharing pics and clips with friends and loved ones, I have found this feature worth taking note of.

If Google succeeds in hitting the jackpot rightly, Android will eventually have a messaging system that provides a unified and seamless experience that could  be (at some point or the other) the envy to even those who are obsessed with the blue bubbles (iMessage) that have been a signature of Apple ecosystem for several years.

What are the Cons of RCS Chat?

Despite being hailed as the next-generation SMS protocol, RCS badly lacks the teeth to safeguard messages. Considering the age where security and privacy have become a must-have subject that everyone – from WhatsApp to Telegram – wants to embrace (at least on the paper), it’s baffling to know that RCS chat doesn’t yet offer end-to-end encryption. Are you kidding?

There is no point in having an advanced messaging system if it can’t shield your privacy and keep the security of your sensitive info intact, is it? To me, what stands iMessage apart from the rest is neither the plethora of eye-catching features nor the intuitive interface. It’s the ability to provide a unified experience with the best possible safeguard against the prying eyes that makes iMessage standout. Unless and until RCS defaults to top-grade end-to-end encryption, Google’s long-driven search to deliver a messaging system that can topple Apple’s offering will remain a far-fetched concept.

Not to mention, RCS also doesn’t seem to support dual-SIM phones if you are using both SIM slots. In a world where most Android phones come with dual-SIM, RCS messaging might find a bit tough to get a foothold. Another huge loophole (as already mentioned above) that seems to be keeping RCS chat back is the over-reliant on carriers. And unless they all support it whole-heartedly, Android users won’t get a unified messaging experience.

GET RCS Chat on Any Android Device with Ease…

So, that’s how you can enable RCS messaging on virtually Android devices. Though I can’t say how long Google will allow this trick to work, I can surely confirm that this hack works elegantly in getting rid of that roadblocks that are preventing SMS+ from being available across the board. Until Google comes with a straightforward solution, get the most out of it to take a sneak peek at what the future of text-messaging has in store. Also, share your tidbits about the things you like in SMSoIP.