Skip to content
Home What is DDR3 vs DDR4 RAM: Is It Worth The Upgrade?

If you’ve been there hunting for a new system to buy or build by yourself, you must have come across the term DDR4 RAM. As far as the market is concerned, the DDR3 is still, by far, the go-to RAM. We’ve all been using the DDR3 RAM for almost a decade now, but the market has started witnessing the introduction of DDR4 modules. With new devices coming out each day, is DDR4 really worth the upgrade, or is it just an expensive newer technology at comparable performance? How different is the DDR4 from its predecessor exactly? If you’ve been wondering about the same questions, well don’t worry, as we bring to you our detailed comparison of DDR4 vs DDR3 RAM, and whether the newer technology really is better or not.

DDR3 vs DDR4: What Has Changed?

To make the jump to newer technologies, the design is probably the first thing that has changed. The DDR3 RAM used a 240-pin package, that has been changed in the DDR4 RAM. DDR4 has switched to a 288-pin package, which directly goes on to say that there will be an obvious boost in the bandwidth capacity, which we will discuss further in the article. Furthermore, since the modules are of the same length, the pin-to-pin distance in the DDR4 RAM has been brought down to 0.85mm, as compared to DDR3’s 1.00mm. This further decreases the overall per-pin contact as well. 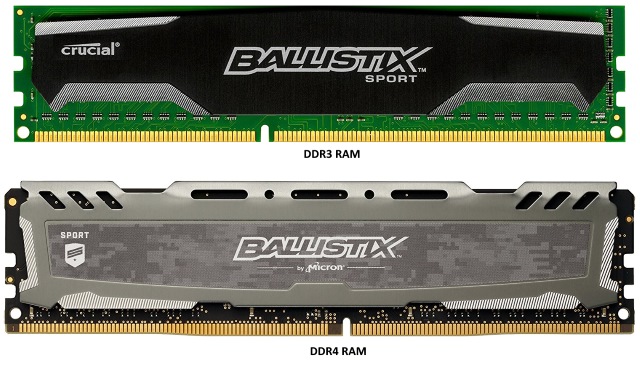 To accommodate the added pins, the modules have a raised height of 31.25mm, as compared to DDR3’s 30.35mm. This has been made to make the routing process easier. Additionally, the PCB has been made thicker as well, raising the dimensions from 1.0mm on the DDR3 to 1.2mm now, which opens the scope for more signal layers.

Power consumption is another aspect which manufacturers like to minimize, and thanks to the new DDR4 RAM, it works out quite well for them. The DDR4 RAM operates at a lower voltage of 1.2 volts as compared to DDR3’s 1.5 volts. While it doesn’t sound like a lot, the quoted numbers end up saving 1-2W per module per system, which for a fully laden home-user desktop might approach 15W at the high end of savings over DDR3, but for a server farm with 1000 CPUs, this means a 15kW saving. Also, as the demand for battery life in notebooks and ultrabooks increases, using a DDR4 RAM alongside the latest 14nm processors allow for increased usage without rushing towards a power socket.

In DDR3 RAMs, a single voltage source is applied across the whole module. This, in turn, can cause a significant voltage drop, affecting stability. With DDR4 though, things have changed. The new design that has been implemented in the DDR4 RAMs works by enhancing the lower voltage with the help of voltage reference ICs before each memory chip. This is done in order to ensure that a consistent voltage is applied across each of them individually rather than the whole module at once. With the help of this new design, all the voltage drops are dependent on the IC only and can be corrected, thus improving the stability of the modules of the DDR4 RAM.

Before discussing the differences between the refresh algorithms of DDR3 vs DDR4, let us discuss a bit about RAMs in brief. Technically, RAMs are of two types – Static and Dynamic. The Dynamic RAM, as the name suggests, keeps on refreshing its content every few intervals. Now, depending upon the way it refreshes, DRAM is divided into multiple types, of which the most prominent one is SDRAM. Synchronous Dynamic Random-Access Memory (SDRAM) is much faster than previous, conventional forms of RAM and DRAM. It operates in a synchronous mode, synchronizing with the bus within the CPU. Now that we’ve got that out of the way, let us discuss the differences between DDR3 and DDR4.

In general, SDRAM devices such as DDR3 RAM, use auto-refresh (AR) and self-refresh (SR) to perform refreshing of its content. In general, SR is used when idle for power saving, while AR is used when the system is busy. On the other hand, DDR4 supports a low-power auto self-refresh, which does the standard thing of refreshing the contents of memory but uses an adaptive algorithm based on the temperature in order to avoid signal drift.

In each module, the refreshing modes will adjust each array independently, since the controller must support a fine-grained optimization routine. This is also done to ensure that the parts of the memory that are being used coincide with one another. This serves as a power as well as stability insurance for the years to come.

The clock speed for a RAM represents how fast the RAM can read or write the data. One of the major differences of DDR3 vs DDR4 RAMs lies in their clocked speeds. Even though for DDR3 RAMs, the clock speed ranges from 800Mhz to 2133Mhz, manufacturers have moved on to make sure that the lowest clock speed is 1333Mhz for DDR3. That being said, the highest limit remains at 2133Mhz only. DDR4 RAM, on the other hand, picks up where DDR3 left off, with the minimum clock speed set at 2133Mhz and no specific max value. This increase in the clock speeds also brings about an overall increase in their bandwidths.

The increased clock speed and bandwidth come along with an increase in the latency as well. The DDR3-2133 comes with a latency of ~55 nanoseconds. On the other hand, the DDR4-2133 has a latency of ~63 nanoseconds.

That being said, the latency is not that high, especially when the clock speeds and bandwidth abstract the drop in latency.

The memory capacity is also another aspect to keep in mind. While for most daily usages, 4GB RAM capacity seems to be fine, gamers tend to opt for 8 gigs of memory. Additionally, users interested in video editing and similar work tend to go for even higher memory capacities. As such, the DDR3 RAM is capped out at 8GB for a single module, while a max capacity of 16GB is available in DIMMs (Dual Inline Memory Modules), which are used in mainframes and workstation systems. On the other hand, DDR4 has no maximum capacity over its memory size, allowing for the system to store high amounts of data into the memory.

While benchmarks are never a true testament of real world performances, they do tend to give some idea about it. We ran a couple of tests to compare the DDR3 RAM vs DDR4 RAM using Handbrake, Adobe Premier, and the PCMark scores.

Apart from the 2133 Mhz clock speed, the DDR4 seems to be consistently faster across the board, although its advantage does wane fairly early on. The difference isn’t staggering, but it’s measurable.

The same trend occurs with Adobe Premiere CC and Adobe Media Encoder, though more pronounced. The DDR4 does outperform the predecessor, but the difference isn’t that huge.

Finally, in the PCMark 8’s Adobe Suite, the DDR4 is consistently faster and continues to scale up gradually with each speed grade. While the difference between DDR3-2133 and DDR4-2133 is very low, just a single boost up to the next frequency for DDR4 turns the tables around.

Compatibility is a big factor to keep in mind when making your purchase. None of the RAMs are compatible with the other ones, and this has been the case with DDR3 and DDR4 as well. You cannot install a DDR4 RAM onto a DDR3 port or vice versa. Thankfully, motherboard manufacturers make sure to mention what RAM does their system support, thus eradicating any confusion. While speaking in general terms, and motherboard built between the years 2007 and 2014 is likely to support DDR3 RAM, while models made after 2014 are more likely to support the DDR4 module.

The DDR3 standard has been around for almost a decade, whereas the DDR4 modules have only been here for a couple of years. The DDR4 is the newer and updated technology, so it’s a no-brainer that obviously it would be more expensive as compared to the DDR3 modules. For example, you can get the 8GB kit of ADATA DDR3-2133 for $59.29 only, whereas the comparative DDR4-2133 will set you back at $91.49, almost a $30 difference.

As mentioned before, DDR4 picks up from where DDR3 left, improving in almost all the aspects. The DDR4 RAMs have definitely proven to be a worthy successor. While there isn’t much to separate the two when both are operating at 2133 Mhz, the higher clock speeds of DDR4 RAM give it a certain boost over the previous generation of RAMs. The higher raw power, combined with lower power consumption make the DDR4 a clear winner against the DDR3 RAM.

But Do You Need To Upgrade?

We’ve seen that DDR4 does beat the DDR3 RAM in terms of numbers as well as real-world performance. That being said, it is also notable that the difference between the two isn’t that high. If you’re on a tight budget, investing in a DDR3 RAM of higher memory module with a faster processor and a better GPU is more likely to result in improved all-around performances. Or if you’ve got the extra cash in hand to spend on the more expensive DDR4 RAM. There is no way that it’d be a wrong decision, considering the fact that it is indeed the future. Either way, the switch to DDR4 is inevitable, one that you’ll be making sooner or later.

Well, that’s what we think but we’d love to know your thoughts on DDR3 vs DDR4? So, let us know in the comments section below.