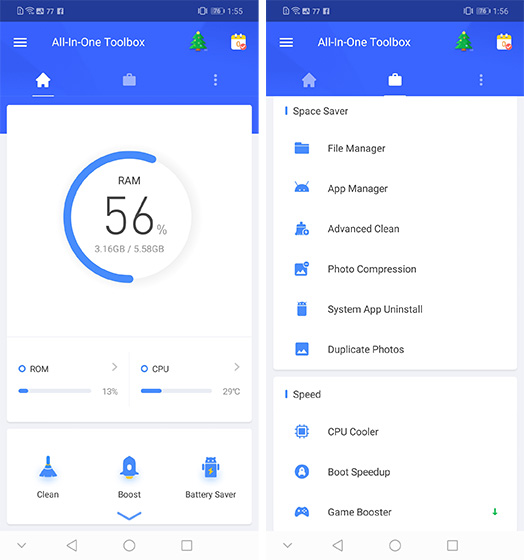 All-In-One Toolbox is definitely the best cleaner and booster apps for Android for one reason and one reason alone – this single app offers pretty much everything you’ll need to speed up your old Android device. The app not only features a complete memory management tool which allows you to clear all background apps, but it also features a comprehensive cache cleaning tool that deletes junk files and cache to clear up some space on your smartphone. Other than that, the app also features a CPU cooler, a game booster, an app uninstaller, and a photo compression feature and a lot more, making it one of the most versatile cleaner and booster apps available on Android. 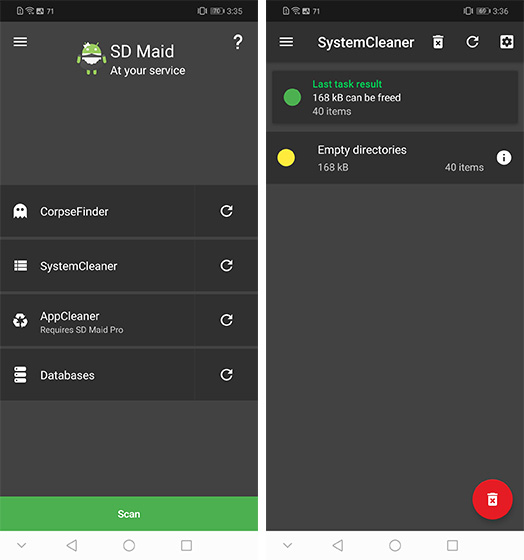 Next up is SDMaid, a powerful file manager that is capable of helping you clear out some storage space on your smartphone. The app includes a CorpseFinder feature that can be used to detect and delete files left on your device by apps that you’ve already uninstalled, a system cleaner that automatically identifies junk files in your internal storage, an AppCleaner which scans for app files that can be deleted without hampering its performance, and a Duplicates feature that identifies duplicate files taking up space on your smartphone. While the app is free to use, some of its features are hidden behind a paywall and you’ll need to purchase SDMaid Pro in order to use them. 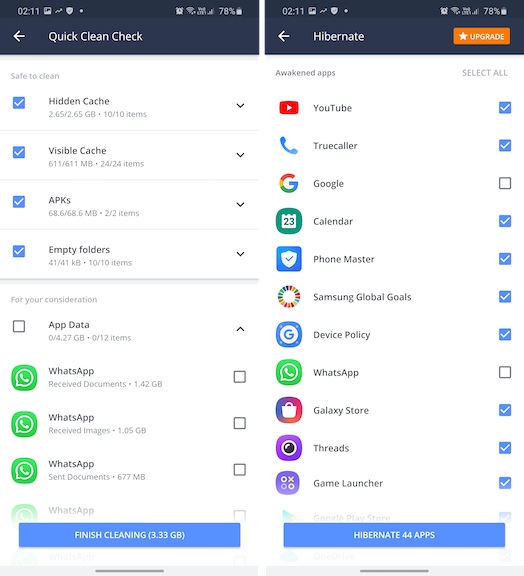 You probably know Avast, the folks behind the very popular antivirus app by the same name. Well, Avast has a pretty capable cleaner and booster app available on the Play Store called Avast Cleanup. The app brings numerous features including a “Quick Clean” feature that shows hidden cache files, APKs, empty folders and some app data you can clean with a tap. Plus, it also lets you boost your memory by putting certain apps into hibernation mode. That’s not all, the app also shows you different space saving tips and there’s an option to see a nice overview of what’s taking up the most storage, along with an apps overview that shows the apps taking up most storage and draining the battery. In my time with the app, I found it to work well but the free version has full page ads that can be annoying. Well, quite expectedly, there is a pro version, which removes ads, and brings features like an automatic cleaner, auto adjust battery usage, adjust photos to save space and themes. 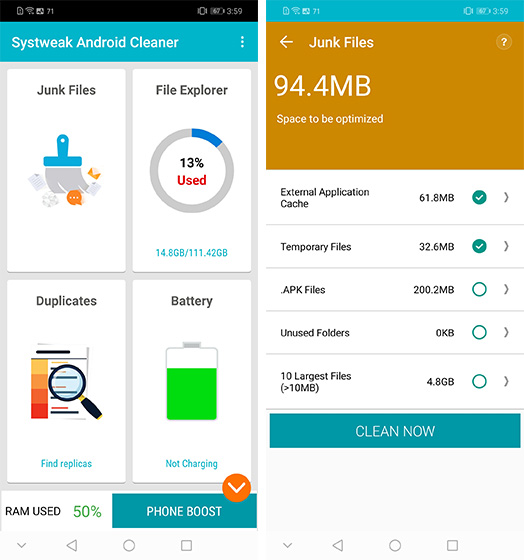 Android Cleaner from Systweak is also a good option to go for as it also packs in a boatload of features including a junk files cleaner, a file explorer, a duplicates cleaner, a battery optimizer, a game booster, and an app manager. What’s special about Android Cleaner, however, is that it includes a dedicated feature to clean up WhatsApp junk files and a hibernate feature that will allow you to temporarily hibernate apps that you don’t use frequently and prevent them from starting up in the background. Android Cleaner has a very clean and user friendly UI as well, making it a must have for non tech-savvy people. 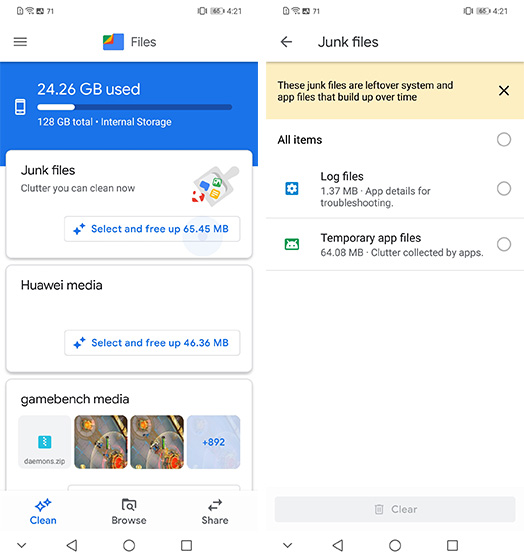 Files (formerly Files Go) by Google is also a great system cleaner that you can opt for if you don’t want to bother with cleaning up your device manually and are okay with depending on an app to do it for you. Predominantly a file explorer, Files by Google also includes a nifty file transfer feature and it also allows users to backup their files to the cloud, which can really come in handy when you’re looking to free up some space but don’t want to lose any files permanently. The app is quite easy to use and it categorizes junk files quite well, making it easy for you to delete files in bulk without worrying about losing any important files. 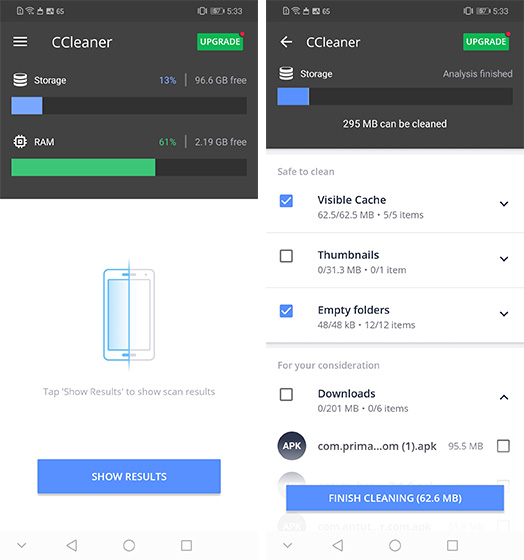 CCleaner, one of the most popular PC and Mac cleaning software, is also available on Android. The app, much like its Windows and macOS counterparts, allows users to remove junk files, monitor their system usage and comes with a speed booster which is capable of speeding up your smartphone quite significantly. The app also has an Adviser feature that suggests the files that you can remove to free up some space on your device. Much like Power Clean, CCleaner also displays annoying ads. They’re not full-screen ads, but annoying nonetheless. You can, however, remove the ads via an in-app purchase. 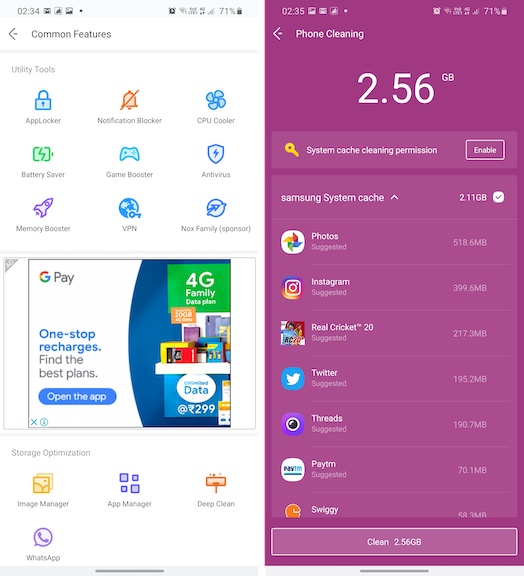 Next up here is Nox Cleaner, which is an all in one feature rich app that brings everything, be it the cleaning, boosting or the different tools. Like I said, there’s obviously the cleaning feature that shows you the system cache files, app cache files, ads spam, APKs, uninstall residual files and more that you can get rid off. When it comes to the boosting, Nox Cleaner shows all the apps running in the background on your smartphone, so you can free RAM usage with just a tap. Now, like I said, there are a ton of other features, including an app locker, notification blocker, game booster, VPN, WhatsApp cleaner and more. Yup, all of that is built into the Nox Cleaner app, so what’s the catch? Well, there isn’t one exactly. I found the free version to be sufficient. Yes, the free version does come with a few non-intrusive ads but that’s it. Having said that, there is a subscription to get unlimited VPN data, remove ads, and get better customer support. 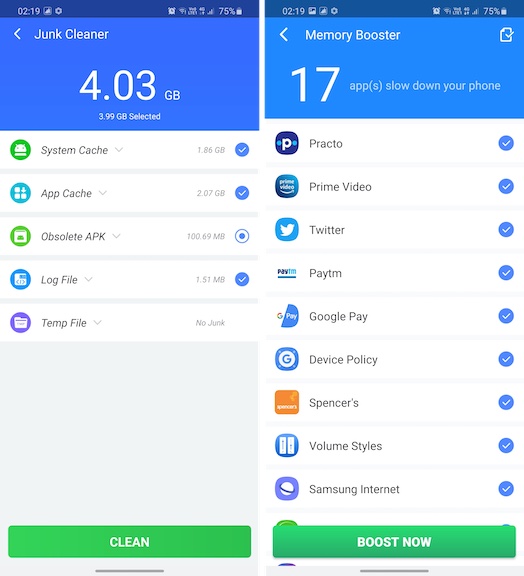 Phone Cleaner is another app that you can check out for all your smartphone storage cleaning and booster needs. The app is pretty simple to use and brings a junk cleaner that shows system cache, app cache, APKs, log files and temporary files, which is great. The memory booster feature in the app shows the apps that slow down your phone and lets you stop them. One feature I did find interesting is where the app shows you all the big files on your phone, so that you can quickly delete that 4K video you don’t really need eating up your storage. Apart from that, the app has battery saver and CPU cooler features but they seem gimmicky. Phone Cleaner is available for free on the Play Store but it does come with some video ads, and there’s no way to remove them. 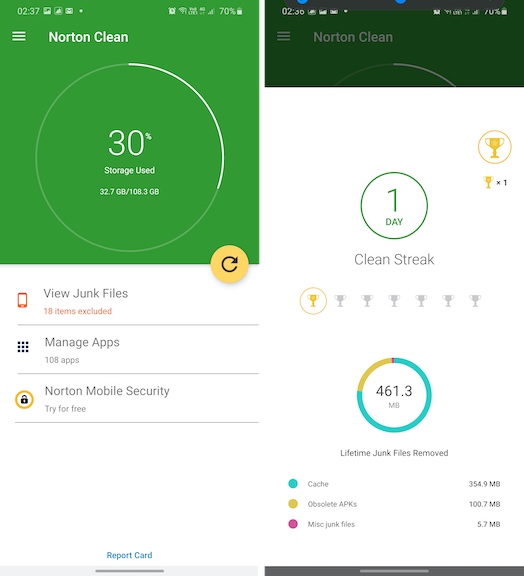 Norton Cleaner is arguably the simplest and most clean cleaner app I have tried on Android. The app is pretty straightforward. All it does is it lets you clean junk files from your Android smartphone with a tap. It shows you the cache files you can remove, APKs, and other junk files you can delete. Yes, that’s pretty much it. I know, it’s not very feature rich but it gets the job done without taking up unnecessary permissions and I like the fact that it’s totally free. 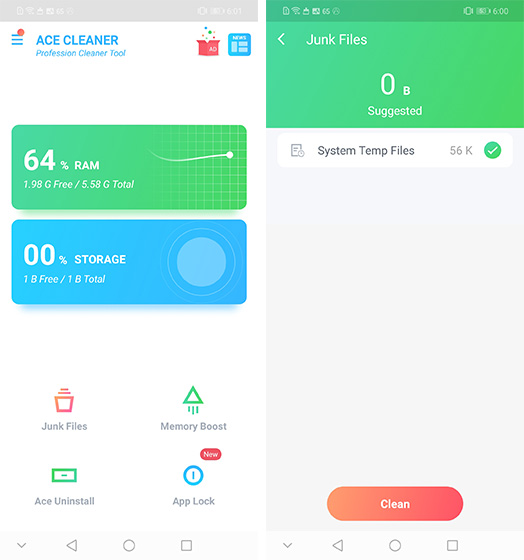 Ace Cleaner is another pretty capable cleaner and speed booster for Android which has a really clean and minimal user interface. The app includes a couple of handy features that will help you speed up your old Android device, including a junk cleaner, a CPU cooler, a battery saver, and a duplicates remover. Ace Cleaner also packs in an app uninstaller which will allow you to remove apps in bulk, along with an app locker which allows you to secure sensitive apps.

Install one of the aforementioned cleaner and booster apps to improve your device’s performance and slightly extend its life. Do note that while clearing the cache and closing all apps will make your phone feel faster, opening up apps might take up slightly more time as they’re no longer stored in the system memory. So, which of these cleaner and booster apps will you try out first? Have you tried any of these apps before and did it improve your device’s performance? Let us know in the comments section below.