Beebom
Home Google List of Chrome Components and What They Mean

Google Chrome updates itself in the background so users never have to worry about updating the browser themselves. There’s also a simple way to check for pending updates by going to the “About Google Chrome” page using the three-dot menu at the top right. However, both these methods update Chrome as a whole and users have no control over the updates. Sometimes a faulty update might result in Chrome crashes which might leave users frustrated. Well, there is a way to debug Chrome updates on your own without needing any technical support and that is made possible by Chrome Components. In this article, we are going to discuss Chrome Components, what they are, and how can they help you manually update different parts of Chrome.

Before we see the list of Chrome components and what they mean, let us first learn a little bit about them.

What Are Chrome Components

Unlike Chrome Setting and Chrome Flags which allow you to disable or enable new features on Chrome, Chrome Components are the individual components of Chrome that work in the background and make those features possible. For example, ‘there’s a component called “Adobe Flash Player” that let’s Adobe Flash Player work on your Chrome.

How to Open Chrome Components

The Chrome Components page on Google Chrome can be accessed by using the Chrome URL feature. A user only needs to visit the chrome://components URL page and he will be shown all the different components of Chrome. To update a Chrome Component, just click on the “Check for update” below that component, and it will automatically update the said component if an update is available. 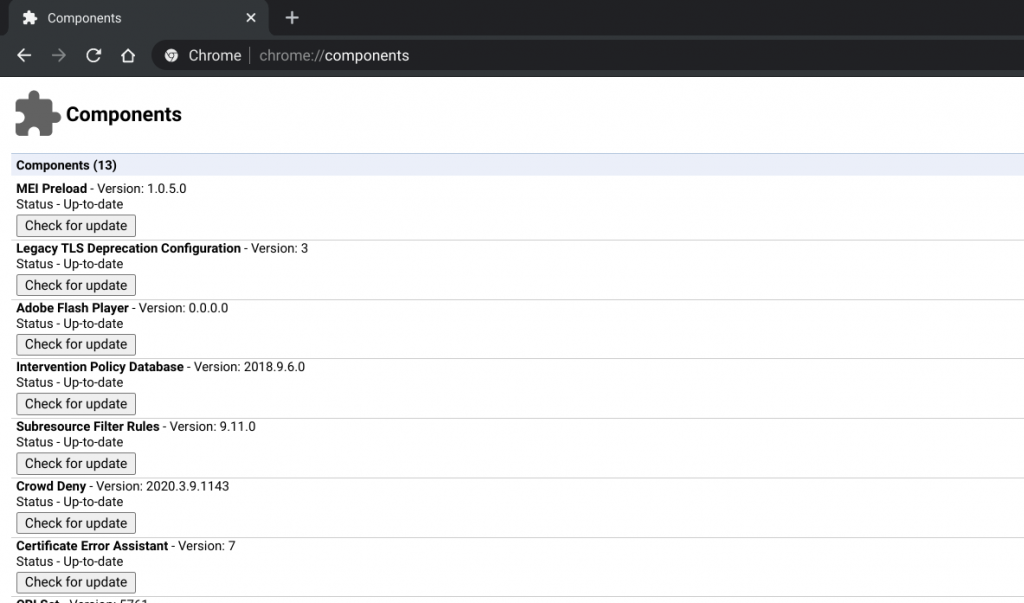 Now that you know what Chrome components are and how you can update them, let us see the list of different components and what they do.

MEI Preload is the Media engagement bundle which has to do with media playback on your Chrome. The component basically is used to preload content from websites for users. If your Chrome is unable to preload media, update the MEI Preload component and check again.

The Intervention Policy Database component is used to push policies and settings to the user’s devices. If it is not updated and working correctly it might result in crashing of Chrome.

Subresource Filter Rules is one of the most important components of Chrome. You can say that it’s the bedrock on which Chrome rests its legs. Here is why, the adblocker that you use, takes advantage of Subresource Filter Rules to block websites which don’t follow the Better Ads Standard. Secondly, Google updates this filter and uses it to block websites that have phishing behavior.

Crowd Deny is Chrome’s unique component which deals with website permissions. For example, if you are visiting a website, Chrome can block permissions like cookies storage, notifications, sound, and more based on the site’s reputation data. And if the reputation data of the site is not good then Chrome kicks in Crowd Deny component to revoke all the permissions. However, for now, it only happens on HTTPS websites.

Like PNaCl, Origin Trials is another Chrome component which allows developers to test and experiment with Google Chrome’s web platform without bricking the browser.

Certificate Error Assistant is a component that helps you while generating signed SSL certificates in case you get any error due to mismatching. If you are signing your website or app using a third-party keychain, in that case too, Chrome can help you resolve issues. Apart from that, you can issue SSL certificates from Chrome’s self-signed certificate authority.

CRL stands for Certificate Revocation List. So what this component does is, it maintains a list of websites with bad certificates so that users can be protected from harmful websites. Google continuously updates the revocation list of all expired security certificates and those certificates which are no longer deemed trusted by their issuer. Simply put, the CRLSet component helps you stay away from malicious websites.

Safety Tips is more or less self-explanatory, but let me explain a bit. It deals with safety precautions while using Google Chrome on the internet, alerts the users with tips to “go back” from visiting a phishing website and more. Other than that, Safety Tips also comes in hand when you are visiting a spoofed website i.e. when the domain is identical to another popular website, but it’s actually fake. So to sum up, the Safety Tips component should always be up to date so that you remain protected on the internet while using Chrome.

OnDeviceHeadSuggest is a new addition to Chrome Components and we are not sure about its exact objective. However, according to the Chromium Gerrit, it has to do with the Omnibox suggestion box as it uses the OmniboxOnDeviceHeadProvider Chrome Flag. Anyway, the OnDeviceHeadSuggest component is at its infancy stage and Chrome engineers are deploying it to study how Chrome can generate better suggestions in the Omnibox from personalized queries.

cros-termina is again a new Chrome component, but it’s only meant for Chrome OS users. In case you don’t know, Chrome OS has got Linux support (and it works really well!) and its Terminal has been named termina in Chromium’s Gerrit. On the other hand, Chrome OS’ default Terminal is named as Crosh. So basically, this component allows you to interact with Linux’s Terminal through Chrome OS’ native command line. If you face any problem with Linux on your Chromebook then try to update this component.

I hope that this article helped you gain insight into Google Chrome components and how you can use them to debug common Chrome problems. Do let us know if you have any information about the remaining three components with source by writing in the comments section below. 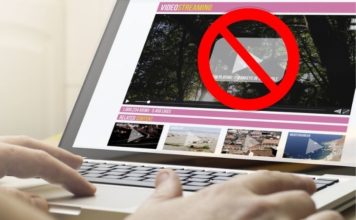 Autoplaying videos on websites can be a real nuisance, eating up valuable data and slowing down your internet connection. It is an even bigger...
Kishalaya Kundu - Apr 17, 2021 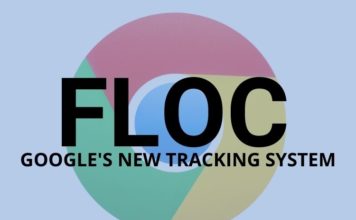 How to Search Recently Closed Tabs on Chrome and Edge

You might already be aware of the keyboard shortcut Ctrl+Shift+T that you can use to restore your recently closed tabs. However, this shortcut is...
Subin B - Apr 6, 2021 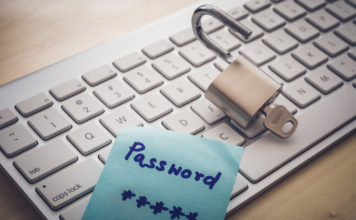