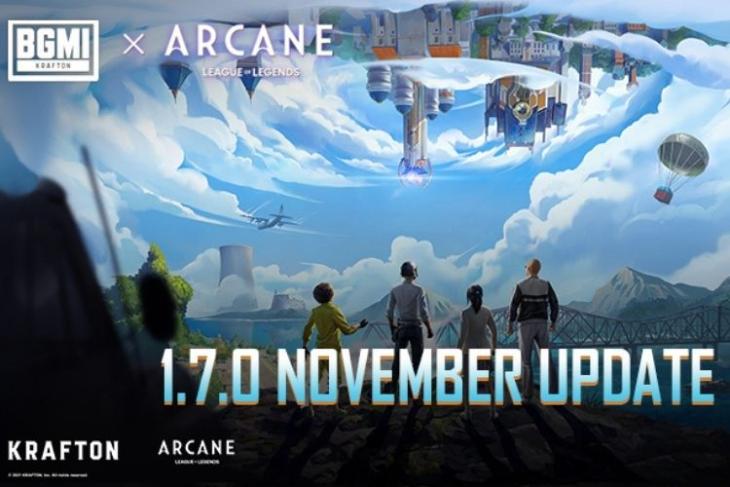 Krafton has released a new update for the Battlegrounds Mobile India, aka, BGMI. The new update is now available for both Android and iOS users and includes the entry of the new Mirror World Theme, gameplay features, and more. Here’s a look at what’s new.

The new update has introduced Netflix’s “League of Legends, Arcane” based event called Mirror World Theme. The Mirror World Theme is available in Erangel, Livik, and Sanhok maps. The Mirror Island will appear in the sky and players can get into the mode by using the Wind Wall on the ground. Following this, they can become one of the characters from Legends, namely, Jinx, Vi, Jayce, and Caitlyn.

The mode allows players to kill a monster with the help of the Arcane character’s weapons and skills. Once killed, they can get Hextech Crystals as a reward. When the monster is killed or the game time is out, players can get back to the normal battlegrounds.

In addition to this, various other events have been introduced with Mirror World events that will allow players to get Arcane characters, Arcane emotes, and items.

There will be a number of features that will be rolled out later this month. The Classic mode will bring the piggyback features and new weapon-related changes. The piggyback feature will let players help a downed teammate or enemy. One thing to note is that while the player will carry the downed player, the speed will decrease and he or she won’t be able to use items or ride vehicles.

A new grenade indicator also makes its entry. This will help players judge the exact location of the grenade. Weapons such as SLR, SKS, mini14, VSS, and DP28 have been updated to further increase their capabilities.

Another event will come up (November 20) in collaboration with Liverpool FC, which will include a number of events such as “You’ll Never Walk Alone” featuring The Reds. There will be rewards like the Liverpool FC parachute, the Liverpool FC backpack, and the much-coveted Liverpool FC jersey.

There will also be the Recoil event where 8 players can play together and earn recoil tokens to get rewards such as the SCAR-L Malachite permanent item.

BGMI will also get the Royale Pass Month 5 for 360UC for the Mirror Realm theme. This will also include Katarina Leader or the Black Circus outfits and Kar98 and MK47 skins will be back too.

It is revealed that with this update, Battlegrounds Mobile India will get improved gameplay with new maps, multiplayer experiences, and more game modes. Maps such as Vikendi map, Metro Royale, Survive Til Dawn and more modes will make a comeback too. Additionally, the battle royale game will include improvements based on the players’ feedback.