Along with battle royale and MMORPGs, tower defense games have always been my top picks. Setting up a massive tower and then defending it using all your might along with your army of defenders never fails to bring me on the edge. Aside from the nail-biting battle, what I love the most about them is the killer strategy that comes into play from both sides. So, it’s not just about an all-out attack but also about game-changing tactics that force you to hatch your plan like a pro strategist. So, if you are hunting for some classy or modern tower defense games boasting all the tactical moves, look no further than these 10 best tower defense games for iPhone and Android.

In this roundup, I have picked out a variety of tower defense games for Android and iOS. While some games are about building huge towers or kingdoms and then shielding them from monsters, others are about defending your village or clan against enemies. What’s more, there are some other games that have mixed tower defense games with fantasy to make the gameplay more intriguing. Now that you have got a fair amount of sneak-peek, let’s dive right in to get going!

What better way to kickstarting the round than talking about the game that has been rated as one of the best tower defense games of all time. The game is all about building your amazing village, raising a loyal clan, and then competing in never-ending clan wars to showcase your might.

What makes Clash of Clans stand out is the strategy-driven gameplay that requires you to put all of your skills to the acid test. So, you should never fail to plan your game wisely keeping in mind the attacks from your rivals. Every time you win, you will get closure to getting on top of the leaderboard.

Featuring a ton of towers, cannons, bombs, and traps, the game lets you fight to your heart’s liking. Even better, Clash of Clans also lets you create custom PVP experiences with special live events and friendly challenges.

If you are after a game with a classy tower-defense style battle, Plants vs. Zombies is the one you shouldn’t miss out on. In this tower-defense game, you have to soil your plants and shield them against the vehement attack from zombies. With 50 thrilling levels along with a survival mode, the game is designed to keep you hooked for hours.

While the gameplay is quite simple, you would enjoy playing it thanks to the see-saw battle between zombie-zapping plants and the adamant zombies. Featuring more than 45 types of plants and over 25 types of zombies each with its own special skills, it has also got the variety to keep boredom at bay.

Along the way, you need to collect coins and grab as many achievements as possible as they can keep you ahead of the game. Using the coins, you can unlock power-ups to boost your game and the chance of dominating the battle.

Should you wish to try out a little different tower defense game, Green the Planet could be worth giving a shot. In this game, your ultimate task is to green the entire planet by decomposing the comets. When you decompose the comets, you will receive special items that are converted into energy by the spaceship. 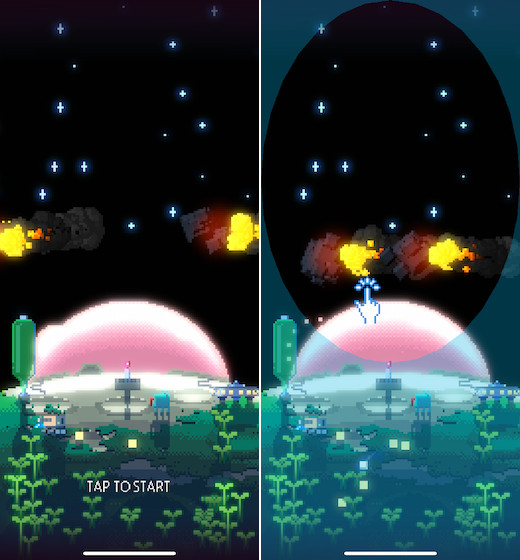 In the end, you can inject energy into the planet to make it a better place to live. To be more precise, the game is about eliminating comets and using the energy to transform the planet. It is how you deal with comets that forms the crux of the entire gameplay.

An epic tower defense game like Kingdom Rush deserves a shot, especially when you don’t want to settle with anything less than the very best gameplay. What makes the gameplay so enticing is the mix of action and fantasy. While the hard-fought action keeps you going, the fantasy ensures you never find the gameplay predictable.

Whether it’s commanding your soldiers or engaging them into challenging cartoon battles, Kingdom Rush requires you to put your veteran strategy on full display. With 8 tower upgrades at the disposal, you need to be quite tactical while dealing with arcane wizards, barbarians, and forest rangers.

Not just that, you have got more than 45 different enemies (from demons to goblins) to take on in the rapid boss fights. But don’t worry, Kingdom Rush has got over 50 achievements to reward you every time you come out as a victor.

Yet another amazing tower defense game from Supercell! If you are after a real-time multiplayer game (1v1 and 2v2) with action-packed gameplay, Clash Royale could be a top choice. The game offers you the desired freedom to build huge towers that can be the envy of everyone and then shield them against ferocious attacks from rivals. 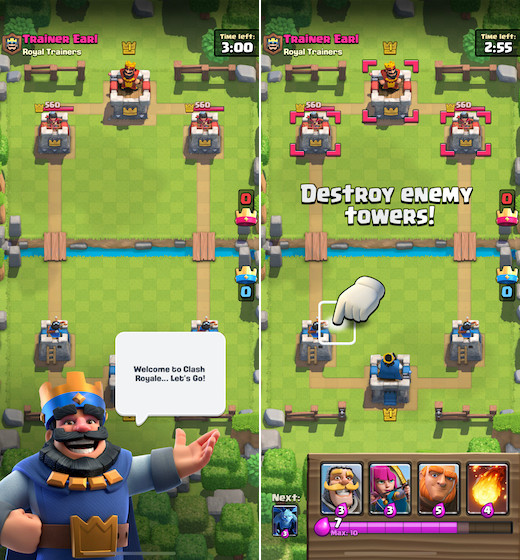 Bear in mind that Clash Royale (just like Clash of Clans) demands you to bring forth your well-thought-out strategy that can challenge the gameplay of your rivals. So, unless you plan your attack wisely, you will find it really hard to defend yourself against enemies.

Whether it’s building an ultimate battle deck or creating your won battle community or showcasing your prowess in the daily/weekly quests, you need to move ahead carefully using your game-changing strategy. Everything considered; Clash Royale has got everything covered to be your favorite tower defense game for iPhone and Android.

If you are ready to take your tower defense gaming to warfare and lead your army to victory as a commander, Toy Defense could be a big hit for you. The game features three modes: PvE missions, tournaments, and PvP battles with around 290 action-packed missions. Lashed with the vehicles from the USA, the USSR, Germany, and Great Britain, it gives you the feeling of classy warfare.

To give a realistic touch to the warfare, Toy Defense allows you to use several nations’ armies during the battle. Thus, the battle seems epic right from the onset. The game requires astute strategic skills to succeed, so you must plan each of your tactics to perfection. Beyond gaming, Toy Defense boasts awesome graphics and plenty of options to grab coveted rewards that keep you ahead in the battle.

It’s the fantasy-driven gameplay that has fascinated me the most in Castle Creeps. The game is about solidifying your defenses and then going your all out to save the kingdom from the massive attack of enemies. To stay at the forefront, recruit and level up your heroes so that they can defend your kingdom from mighty ogres and savage goblins. Apart from empowering your team of heroes, chart out killer strategies that can outwit enemies.

Epic battle aside, I enjoy building, upgrading, selling, and repairing towers in the Castle Creeps. It can get the most out of your creative skill and the ability to find a way to strengthen your towers despite facing all odds. Keep in mind, your desire to be an exemplary savior of the kingdom depends on two key things: how well you safeguard it against enemies and the way you handle towers in the face of intense attacks. So, choose your moves accordingly.

How about going on a long shooting spree to showcase your heroics on full display? Swamp Attack is about defending your home from invading monsters using a variety of guns and bombs. The tower defense game features a challenge mode that can get the most out of you as a shooter. And with the thrilling multiplayer mode, you can get a chance to differentiate your action-packed shooting from the rest.

Swamp Attack features 8 power-packed episodes featuring 390 single-player levels and 40 multiplayer levels. As each level is designed with plenty of twists and turns, your shooting will remain a pleasing experience.

One of my top picks of this game is a collection of defense tools like the reckless minigun, atom bomb, and shotgun that play a vital role in shielding yourself against vehement attack. Besides, the opportunity to equip yourself with bombs and guns as well as the chance to amp up your energy is equally exciting. Overall, Swamp Attack is one of the best tower defense games for Android and iOS.

What makes Bloons TD Battles an interesting proposition is a never-ending battle between monkeys. The multiplayer combat features more than 20 custom head-to-head battle tracks that play a vital role in spicing up the fight. Furthermore, there are three different modes such as assault mode, defensive mode, and battle arena mode.

In the Assault mode, you need to manage your defenses and send bloons directly against your rivals. In the defensive mode, you have to play smartly to ward off the attacks from the enemies. And in the battle arena mode, you will need to go your all out in a high-stake assault. What’s more, Bloons TD Battles also lets you customize your bloons with decals and allows you to grab a to of cool achievements.

Last but least, Steampunk Defense has got all the ingredients to ramp up your tower defense gaming. For starters, the game features riveting gameplay where you have to defend your land against powerful invaders. So, you are left with no option but to build a solid team of gunners, snipers, and ice towers. Once your team is ready and fully equipped, you will start your fight to shield your freedom.

Another thing that makes Steampunk Defense so fascinating is the option to fight in different environments like tropical islands, deserts, and mountains. The game features as many as 24 defense levels and a challenging multiplayer mode that lets you battle against other players. Taking everything into account, Steampunk Defense is a top-notch tower defense game, which you would love to play on your iOS or Android device.

By the way, which is your favorite TD, and what sort of features you want to see in your top picks? Besides, also spill some beans about the worthy contenders that you think deserve a chance in this roundup.