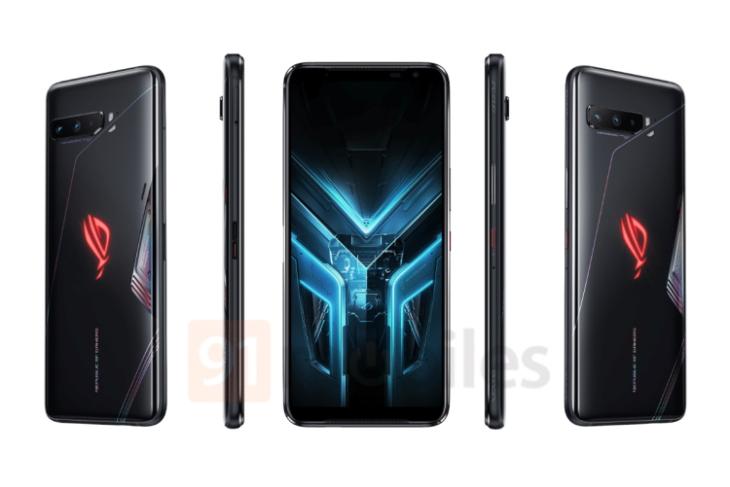 Asus ROG Phone 3 is scheduled to launch on 22nd July in India. Yeah, the company is launching its next-gen phone globally on the same day. Asus has itself been teasing key specs of the device, but reliable tipster Ishan Agarwal (via 91Mobiles) has now shared official-looking renders of the ROG Phone 3.

The render comes just hours after tipster Evan Blass’ leak, who also uploaded an ROG Phone 3 render to his Patreon. It gives us a close look at this gaming phone. It carries forward the design as its predecessor but with some minor upgrades here and there. I mean, the front looks exactly the same as the ROG Phone 2 and so does the back. The latter now includes a triple camera array, that’s all.

The front of the device still includes massive bezels, which is fine with this phone. They are there for a reason – to provide grip and comfortability while gaming, as per Asus. I respect that. You also have front-firing stereo speakers and a selfie camera up-top. So, the bigger bezels are justified in 2020.

The front panel may look the same but Asus is going to bump up the refresh rate to 144Hz this time around. ROG Phone 2 packed a 120Hz display, for those unaware. ROG Phone 3 is going to feature a 6.59-inch Full-HD+ AMOLED screen with a 2340 x 1080 resolution.

Turning our attention to the rear, you find the heat vent and geometric patterns are still aplenty. The only new thing is the triple camera array that will be helmed by a 64MP primary sensor. You will also find an ultra-wide, a macro lens, and a dual-LED flash onboard. There’s obviously a light-up ROG logo on the rear.

The rest of the gaming elements, including the secondary dual-USB Type-C ports on the left edge and trigger button on the right, are found aboard the ROG Phone 3. The volume keys are located on the left edge while an accented power button is found on the right. A major disappointment for some could, however, be the lack of a 3.5mm audio jack.

Apart from this, ROG Phone 3 is confirmed to be backed by the flagship Snapdragon 865 Plus chipset. It will support 5G connectivity, up to 16GB of RAM, and 512GB of built-in storage. Asus will again offer a 6,000mAh battery pack with its gaming phone, along with 30W fast-charging support. So, are you excited for the ROG Phone 3? Does the Lenovo Legion Phone have more of your attention?