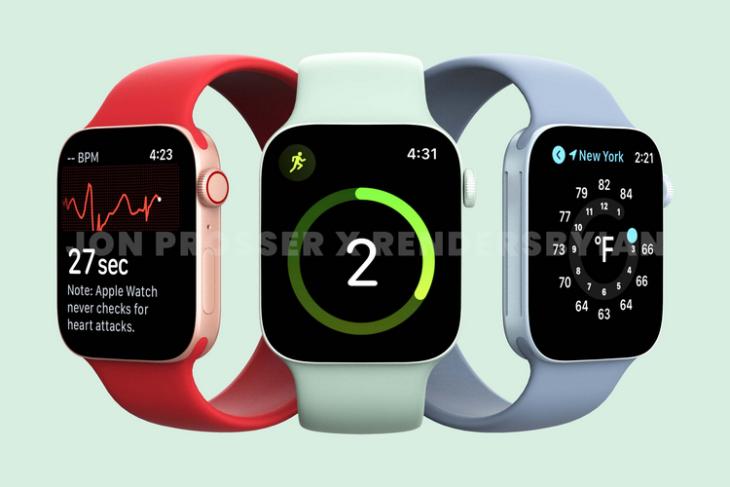 Apple usually improves the underlying hardware and user-facing software with each version of the Apple Watch, but the company has been using the same design for the smartwatch since 2018. Well, that’s reportedly about to change, as a new leak shows the redesigned Apple Watch Series 7 with flat edges and watchOS 8.

The leak comes from YouTuber and reputable tipster Jon Prosser of Front Page Tech in collaboration with concept artist Ian Zelbo. The leaked images are reportedly based on real-world images and CAD files. Going by the leak, the new Apple Watch Series 7’s display will sport flat edges with rounded corners.

Prosser says Apple is testing prototypes with thinner bezels as well. But he adds that the display is likely to be the same as its predecessors. Unfortunately, the exact specs of the upcoming smartwatch remain unknown as of now.

However, Prosser has given us something to look forward to and that is colors. According to him, the Apple Watch Series 7 will offer a new green variant, which he says is similar to what we have seen on the AirPods Max. Other possible color variants include Red, Blue, Silver, and Black.

Prosser’s new report corroborates renowned Apple analyst Ming-Chi Kuo’s research note from September last year that hinted at a ‘significant form factor design change’ on new Apple Watch models in the second half of 2021. Other changes you could expect on the next Apple Watch are an upgraded processor and blood glucose level monitoring.