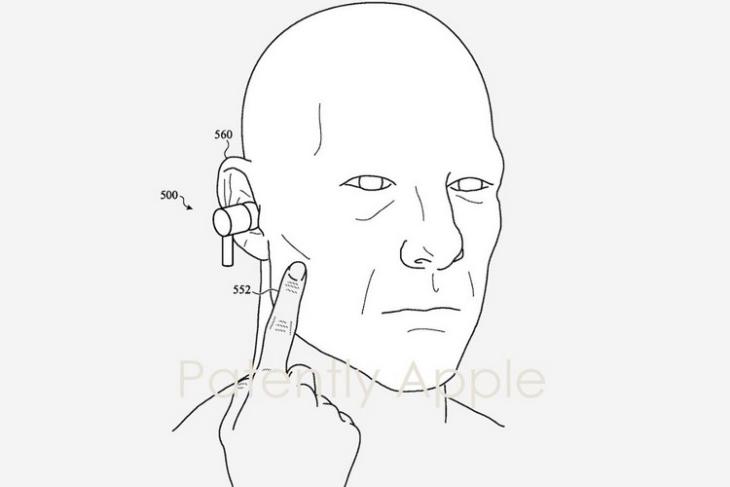 Not long after releasing the super-expensive AirPods Max, Apple has been awarded a patent detailing some pretty exciting features, possibly for its upcoming AirPods TWS earbuds. The patent suggests an entirely different way to control media functions for wireless earphones.

Dubbed as “Detecting Through-Body Inputs At A Wearable Audio Device”, the patent (via Patently Apple) explains the different ways a user can use their body parts to control the earbuds. So, as you can imagine, there will be no touch-sensitive areas, buttons, or digital crowns to change tracks or control the volume.

“Various inputs may cause one or more signals to propagate through or within the structure, outside the structure, or some combination thereof. The wearable audio device may determine whether a detected signal was generated by an input and, if so, change its operation in accordance with the input,” reads the patent.

So, in simple words, with this technology, a wireless earphone would be able to detect the body movements of a user and take them as inputs to control different media functions. Moreover, as per the patent, these body movements can be as simple as the clicking of the tongue or the teeth.

So, this means that if Apple implements this new media-control tech in its rumored AirPods Pro 2, you will be able to change tracks or pause a song by clicking your tongue or your teeth. Well, that surely sounds pretty futuristic and cool on paper.

However, there are some potential concerns when using these media control gestures in the real world. What if your earphones think that you are giving input when you are just vibing with the song? What if you’re talking with someone and click your tongue unintentionally? Will the earphones take that as an input?

Well, these questions remain until the iPhone-maker finally implements the tech in the next-gen AirPods Pro. And personally speaking, I don’t think Apple will integrate these features into its devices anytime soon. It is still in its initial stages and far from perfect. Nonetheless, it is always good to see Apple working on new technologies for its future devices.

What is Conversation Boost on AirPods and How to Use It?

AirPods Max vs AirPods Pro: Which One Should You Buy?