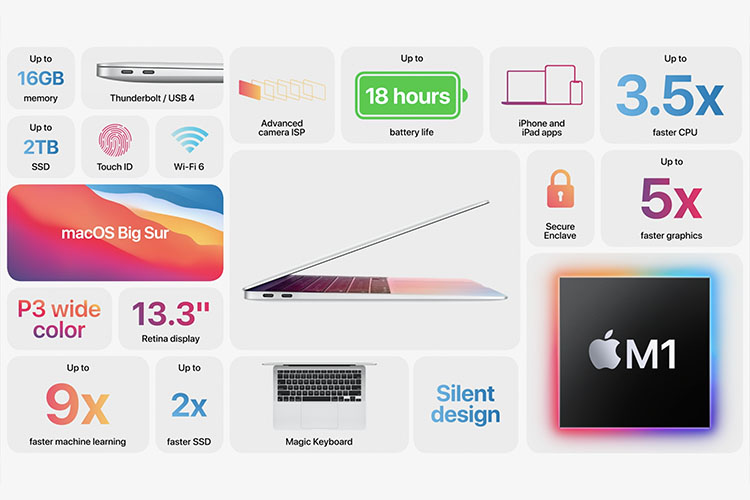 The day is finally here. After teasing it way back in June at WWDC 2020, Apple has today unveiled its first Mac with its own, in-house Apple Silicon — the MacBook Air with Apple M1 SoC.

The new laptop looks exactly like the MacBook Air looks today, with the same 13-inch Retina display, but it brings upgrades under the hood thanks to the new Apple M1 chipset.

The new MacBook Air comes with the new Apple M1 chipset, which is an 8 core processor, paired with an 8 core GPU and a 16 core neural engine. Apple is claiming that the MacBook Air is now three times faster than the best selling Windows laptop in its class, and faster than 98% of Windows laptops sold this year, which is a pretty big claim to make.

The MacBook Air is now also fanless, by the way, and Apple seems confident the M1 can maintain its performance without any active cooling on the MacBook Air, which is something I’ll be looking to check out when I can get my hands on it.

Anyway, coming back to the MacBook Air, it comes with up to 16GB RAM and up to a 2TB SSD. Apple is also saying that the SSD is now two times faster than before thanks to the M1’s storage controller and faster flash memory, which is saying something considering the SSD on the MacBook Air was quite fast already.

The company is also making improvements to the FaceTime HD camera this time around (finally). Thanks to the new ISP in the M1, the MacBook Air’s webcam video quality is going to be better with better noise reduction, greater dynamic range, and better white balance.

For I/O you get two Thunderbolt ports with support for USB 4.

As we were hoping, the battery life gets better with the new M1 chip. Apple is claiming that the MacBook Air will last up to 15 hours of web browsing and 18 hours of video playback. Those are not the best metrics to judge battery life, but that’s what Apple always tells us. Still, these numbers are considerably better than the last generation of the MacBook Air.

The new MacBook Air is priced starting at $999, and you can pre-order it right away. It will be available this Thursday.