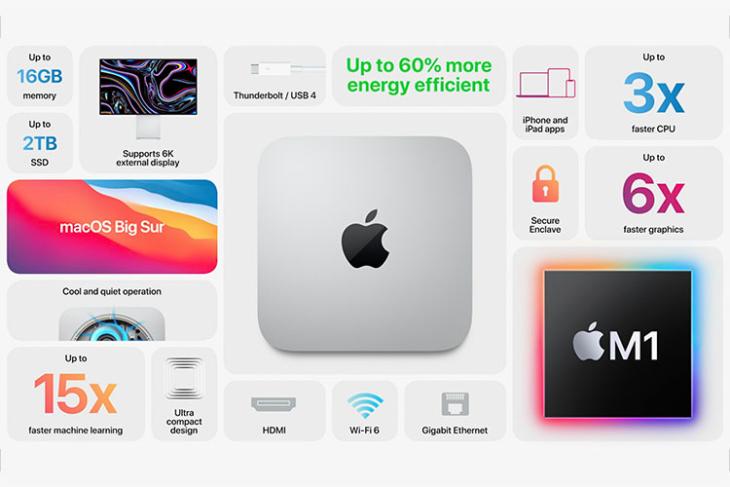 As expected, the M1 chip brings considerable improvements to the performance you’d expect from the Mac Mini. In fact, Apple is claiming that the Mac Mini now performs three times faster as far as the CPU is considered and has six times faster graphics when compared to the previous generation quad core Mac Mini. The new M1 chip also offers 15 times faster machine learning than the last generation Mac Mini.

For I/O, the Mac Mini gets pretty much all the ports you’d need. There are two USB Type-A ports, two Thunderbolt ports, an Ethernet port, and an HDMI port on the back of the device, along with a 3.5mm headphone jack. Plus, the Mac Mini now supports the Pro Display XDR at its full 6K resolution thanks to the faster Thunderbolt ports.

There’s not a lot else to talk about with the Mac Mini, since it’s basically a compact desktop computer, but the performance improvements Apple is claiming for this machine are pretty impressive nonetheless.

The new Mac Mini with the Apple M1 chip is priced at $699, which is actually a $100 lower than the previous Mac Mini. It goes on sale from Thursday, but you can pre-order it right away.