Copying and pasting are the one of the fundamental actions that we perform on our computers everyday. However, even as our computers have evolved, this basic practice still functions in very much the same way as it did back when the first computers with clipboard capabilities came out. Why is that a problem? Well, the way copy and paste works right now, is that you can only copy one piece of text at time. If you need to copy multiple links off a webpage, and paste them in another window on your Mac, you’re sadly out of luck. However, you can thank the app developers that saw this problem and created a plethora of apps that can be used to manage multiple copied links.

Jumpcut is an open source clipboard manager app. The features that Jumpcut offers are exactly what one would expect from a basic “get it done” implementation of a clipboard manager app. Jumpcut can remember up to 100 copies, which really should be enough for any normal user. The app opens up as a menu bar application and can be activated using a customisable hotkey combination. As one might expect, pressing the hotkey combination makes a small window pop up, with the contents of the last copy you made; the copied contents can be scrolled through by using the arrow keys, and letting go of the hotkey results in the displayed result being automatically pasted at the position of your cursor. 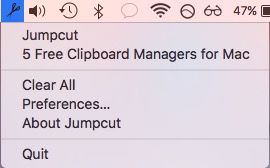 The menu bar icon also gives a quick view of upto 40 of the latest copies made by the user, which can come in very handy for quickly copying an older result, without having to navigate through all of the newer results in the pop up window.

If there is one feature that I wish Jumpcut had, it is the ability to copy and paste images. That is probably the only issue that I faced with the app.

ClipMenu is a clipboard manager that offers a lot more features than Jumpcut or Flycut and the features are highly useful as well. For starters, ClipMenu can remember any number of items that you want it to. This setting can be adjusted in the preferences for ClipMenu. It also automatically organises copied items into folders for what I’m sure the developers meant to be easy “maintainability” of copied contents, but it ends up hindering productivity, rather than increasing it. 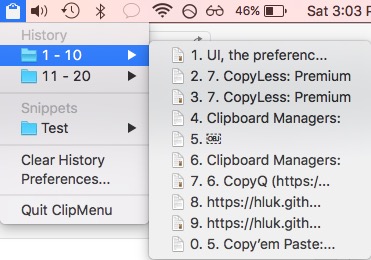 ClipMenu also supports additional file formats, which Jumpcut and Flycut don’t. Using ClipMenu, you can copy text data, PDFs, RTF files and more. It also supports Images. When I first read that feature, I was sold, and I tried it out, only to be completely disappointed, when I found out that the app only supports TIFF and PICT formats. PICT format! It does not support any of the standard formats that normal people use, not JPEGs, PNGs, not even BMPs. I mean, if you are going to start supporting formats that are barely used, if at all, why not atleast support BMP files?

Very weird image format choices notwithstanding, ClipMenu is a good app, and I would highly recommend it to you, unless you want to use it to manage copied images as well.

ClipMenu also has support for custom text snippets that you can use to fill up repetitive data wherever you want to. You can create custom snippets in the preferences for ClipMenu, and they can be used directly in any app that you want to use them in.

When I first launched Flycut, I was confused, because it looked exactly like Jumpcut. The UI, the preference pane (almost), and even the pop-up window looks exactly the same as Jumpcut’s. However, Flycut comes with its own improvements over Jumpcut’s offerings. While it too can only hold up to 100 copies, and can only display up to 40 of the latest copies made by the user, it does add additional features to the app. 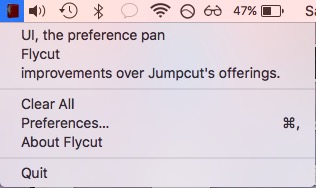 Flycut has the option to automatically remove duplicate copies. This is extremely useful as it ensures that you don’t end up with multiple copies of the same data, especially if you copy a lot of stuff in one go, to paste it later.

Flycut also has the option to adjust the height of the pop up window that opens up when you use the hotkey command to go through all the content you have copied. The scrolling feature remains the same, and you can scroll through all the copies you have made using the arrow keys on your keyboard. Letting go of the hotkeys produces the same result as in Jumpcut, by automatically pasting the displayed result at the position of your cursor.

Unfortunately, Flycut doesn’t support copying images either. However, for every other purpose, Flycut is an amazing clipboard manager.

The feature sets for these apps have started to get increasingly similar, however, I have not included any app that did not offer at least one different feature than the rest of the apps. CopyClip is no different. While it offers features such as the ability to remember a practically infinite number of copied data, it also has the unique ability that allows users to set exceptions on a per app basis. This means that the app will not remember copied data from apps that have been blacklisted. This feature is exceptionally useful if you use password managers and tend to copy and paste your passwords often; something I would never recommend anyone to do, especially on a Mac, which has a perfectly well built, and versatile Keychain Access app that does the job for you. 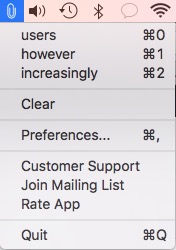 1Clipboard is an app that immediately caught my attention. Not because of some really great features (it does have some), but because it looks a lot better than any of the other clipboard managers that I tried out. Sure, they got the job done, and they have the features that someone might need in a clipboard manager. However, I have repeatedly stressed the importance of good UI/UX to anyone who would listen. 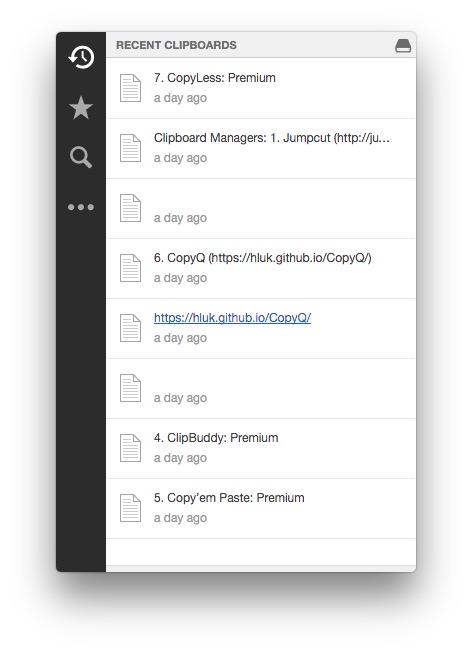 Now, 1Clipboard is nowhere near a “good UI/UX” standard, but it’s simply much better than the other apps on this list. It also boasts of some good features. The app uses Google Drive to sync the user’s clipboard across devices. When I say across devices, I don’t mean it in the way Apple’s continuity and handoff works (only with Apple devices), I mean that 1Clipboard syncs your clipboard content between Windows and Mac computers, provided that it is installed on both of the systems, obviously.

The app only has one major flaw, admittedly in a rather important aspect of its functionality. The procedure to paste a copied item from 1Clipboard, is simply too much of a hassle, as compared to other apps, and the way they work. While apps such as Jumpcut and Flycut automatically paste the content being displayed inside the pop up window, 1Clipboard decides to annoy the user a little, and requires the user to either click on, or press the corresponding number key for an item from the 1Clipboard manager, and then press “Command + V” to paste the content.

SEE ALSO: How to Copy Any Text to Clipboard on Android

Now that you know about all these apps that can help you manage the contents of your clipboard, you can easily manage all the data that you need to copy on your Mac. No more switching between multiple windows, constantly copying new data and then pasting it. You can simply copy all the items that you need and paste them one by one wherever you want to without having to switch between windows all the time.

Like always, let us know about your experience with copying multiple items to and fro between different apps, and the methods that you used to try and simplify your problems. We would love to hear about any more recommendations for clipboard managers that you think we ought to know of. Share your views with us in the comments section below.

How to Enable Clipboard History on a Chromebook

How to Paste Multiple Items with Assignable Hotkeys on Windows 10