Skip to content
Home News There is a 212-Story Building in “Microsoft Flight Simulator”, Thanks to a Typo 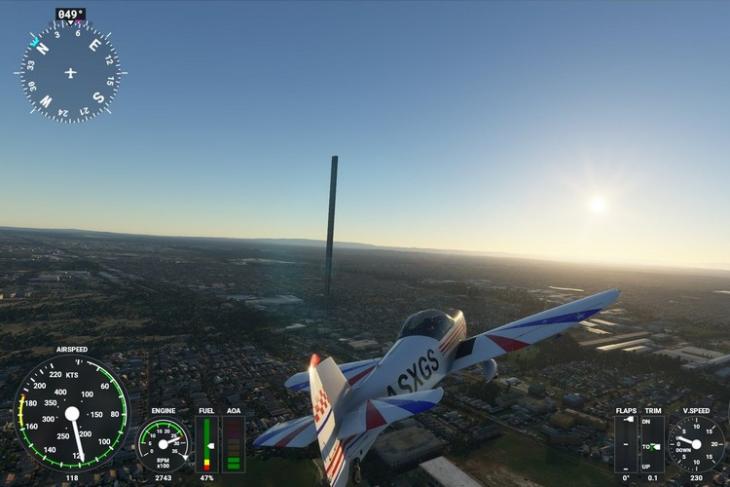 After a lot of wait and anticipation, Micorosft finally released the “Microsoft Flight Simulator 2020” for players to (virtually) roam around the world. Although the box edition of the game comes with 10 whole DVDs, the game looks unrealistically realistic when it comes to famous landmarks and popular landscapes. However, users have recently spotted an unusual glitch in the game when they saw a really (and, I mean REALLY!) tall stick-like building rising out of a non-descriptive location in Melbourne, Australia.

While flying over the city of Melbourne, many users recently came across an over the top (literally!) 212-story building soaring to the skies. Now, in reality, this building obviously does not exist in Melbourne, or for that matter, anywhere in the world. So, how did it get there in the game despite the game being so realistic for most of the scenarios?

After an investigation by a Twitter user, it was discovered that it was actually a simple typo by a generous data contributor that caused the existence of the significant building in the game.

See, the developers of “Microsoft Flight Simulator”, Asobo Studio, to create the global destinations in the game, used data from a free crowd-sourced map of the world, OpenStreetMap. And on this platform, anyone can contribute data to fill out the unknown places.

According to the investigation by Liam O (@liamosaur), more like a year ago, a user named “nathanwright120” added information about a building to the particular area of the map. However, the mistake was that he wrote that the building has 212 levels, while it has only 2 levels.

A year ago, "nathanwright120" made an edit to @openstreetmap , adding a tag that indicates that a building in the suburb of Fawkner in Melbourne, Australia, had 212 floors instead of 2. All his other edits of openstreetmap seem legit, so it appears to have been a typo… (1/2) pic.twitter.com/Mwh1LBu3ap

Now, although the mistake on OpenStreetMap was fixed later by another contributor, the developers have already taken the data for the game by that time. So, thanks to a simple typing error by this user, there is now a sky-soaring building in Microsoft’s flight-sim game.

You Will Be Able to Play Microsoft Flight Simulator 2020 Soon