According to a recent listing on Geekbench, Xiaomi may be working on a new smartphone that will be powered by a yet-to-be-announced SoC from Qualcomm. The device comes with the codename ‘Valentino’, and is listed as being powered by the Snapdragon 638, which apparently hosts an octa-core CPU clocked at 1.44GHz. The listing also reveals that the device sports 6GB of RAM, and runs Android 8.1 Oreo out-of-the-box.

As can be seen from the image, ‘Valentino’ notched up 1485 points in the Geekbench single-core test and 5440 points in the multi-core benchmark, both of which are keeping in line with premium mid-range devices as of 2018. The company’s latest mid-range warhorse, the Redmi Note 5 Pro, is powered by the Snapdragon 636, as are most other mid-rangers these days, including the recently-launched Zenfone Max Pro M1 from Asus. 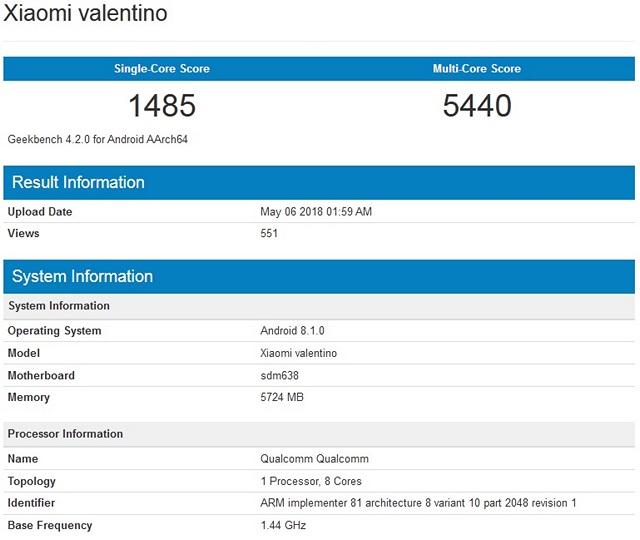 It’s worth noting that this is the first time we’ve heard about the existence of a Snapdragon 638, so if the listing isn’t the result of an elaborate hoax from someone, it will be interesting to see what the chipset brings to the table. Given the model number, it will very likely be a bit of an improvement over the Snapdragon 636, something that’s already suggested by the impressive benchmark scores.

Having already released the Redmi Note 5 Pro, and with most of the key tech-specs of the Redmi S2 already pretty much revealed through successive leaks, it will be interesting to see what other mid-range device Xiaomi is working on. However, given that details about the Mi Max 3 are still up in the air, we won’t be surprised if the ‘Valentio’ does indeed, turn out to be the next-gen mid-range phablet from the Chinese smartphone giant.