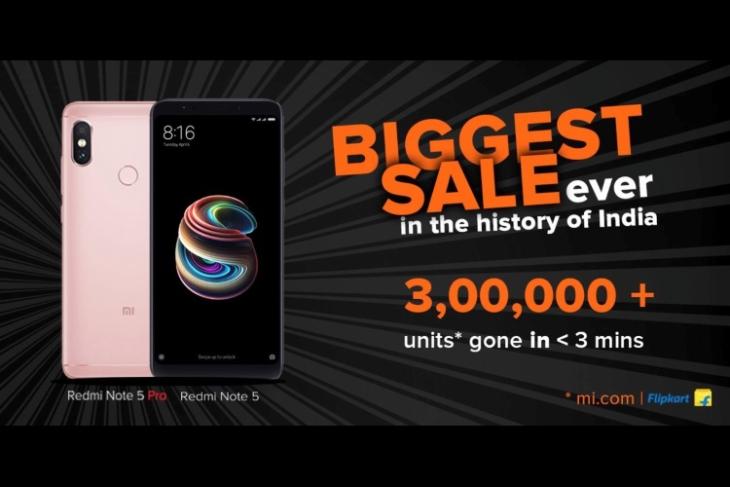 Looks like Xiaomi has another hit on its hands. According to a tweet sent by Manu Kumar Jain, Global VP of Xiaomi and Managing Director of Xiaomi India, the Mi TV 4 just took 10 seconds to sell out. In the tweet, he also thanked Mi fans for the amazing response and informed them that the next sale will be held on the February 27.

Gone in 10 seconds!#MiTV4 – the world's thinnest and most beautiful TV sold out in <10 secs!

Thank you, Mi Fans for your amazing response. Don't worry if you missed it. Next sale is on the 27th 😊 pic.twitter.com/3Pg8GBxUTF

Manu Kumar Jain sent out another tweet in which he informed that both the Redmi Note 5 and Redmi Note 5 Pro sold 3 lakh units combined and that too under 3 minutes.

After the amazing success of Redmi Note 4, we had put in a lot of effort to increase supply of Redmi Note 5. This was the biggest ever sale in India!

Gear up for the next sale on 28th Feb! pic.twitter.com/qbOWYxClFZ

Despite these claims, many users replied to these tweets with anger over the lack of stock and the opaque way in which the sale was held. Many unsuccessful buyers accused Xiaomi of using false marketing tactics to build big hype for the products. While some users were only blaming Jain for lying that the sale lasted 3 minutes, some just outright blamed Xiaomi for lying about numbers.

@manukumarjain @XiaomiIndia @MiIndiaSupport @xiaomi
Is your calculation correct ? Is it 30000 or 300000 ?
I think it is your marketing strategy without a huge amount of stocks. So, stop fooling people. First mentain ample stock then go for sale.

Some users even reported that both the MiStore and Flipkart crashed just as they added products to their cart. Flipkart responded to some of the tweets by giving out a general statement where the company said things like “the response was overwhelming” or “stock got over really soon”.

Due to overwhelming response from our customers the product got out of stock real quick. Please use 'Notify Me' option to get timely alerts on product availability.

However, the controversy over the figures of Redmi Note 5 and Redmi Note 5 Pro is nothing compared to the controversy that’s going on for Mi TV4. Users are just outright ridiculing Xiaomi. Since Xiaomi has not given any figures on the number of Mi TV 4s that were sold, it’s been suspected that the stock was fairly limited.

How many 10 TVs? Come on guys if u had the stock and then gone in 10 then u can claim but this is a joke.

Buyers are also reporting that on adding the TV to their cart, even for cities like Delhi and Mumbai, Flipkart was showing that their pincode was not supported for delivery.

Sorry that you were unable to view the product availability at your pincode. This was because the seller ran out of stock for the product real quick. Please stay tuned for the next sale on Feb 27, 2018, at 12 noon

Of course this backlash is nothing new. Every Xiaomi flash sale has the same issues, which is why the company’s decision to continue having these is more surprising. Sure there’s a momentary hype around the product, but ultimately angry customers are not something you want. One hopes Xiaomi comes better prepared during the next sale.

Mi TV 4, 4A Get PatchWall Update With Revamped Search And History Functions