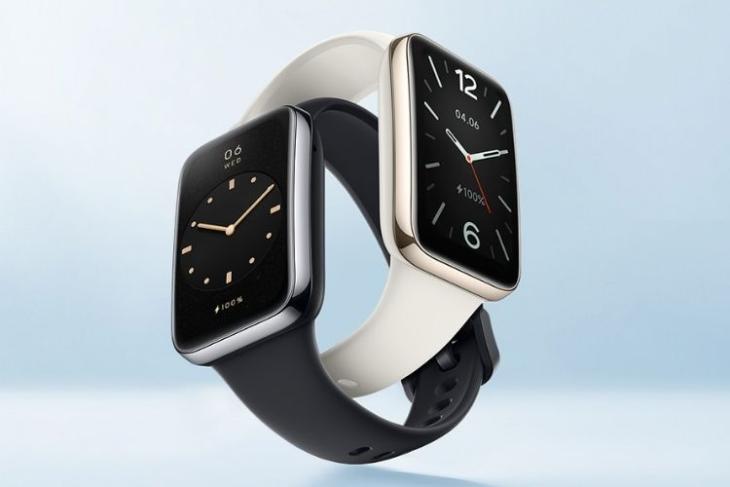 Ever since the launch of the first Mi Band back in 2014, Xiaomi has been launching its flagship fitness wearable with the same pill-shaped design every year. The Mi Band 7 was unveiled earlier this year with a larger screen in the signature pill shape. However, the company has finally decided to move on from the pill-shaped design with the launch of the Xiaomi Mi Band 7 Pro in China today. Let’s look at what this fitness wearable brings to the table.

With the Mi Band 7 Pro, Xiaomi seems to have taken inspiration from the design of the Huawei Band 6. The wearable no longer looks like just another fitness band. Instead, it blurs the line between a fitness band and a smartwatch with its bigger and bold design. Xiaomi Smart Band 7 Pro includes a 1.64-inch AMOLED display, which is wider horizontally than the standard Band 7. That means you now have a larger surface area to display content and notifications.

The panel here boasts a pixel density of 326ppi, 280 x 456p resolution, and Always-on display. Also, the Band 7 Pro comes with more than 180 watch faces out of the box. In addition, another thing that’s new in the Xiaomi Band 7 Pro is the ambient light sensor, which enables automatic brightness.

Coming to the other features, most of them remain the same as the standard Mi Band 7. You get health features such as continuous heart rate tracking, blood oxygen monitoring, sleep tracking, and more. The Pro variant supports up to 117 sports modes, NFC by default (not a separate variant), and built-in GPS for tracking workouts without carrying your smartphone.

Moreover, the fitness tracker is water resistant up to 5ATM and gets its juice from a 235mAh battery. Xiaomi claims that it will last up to 12 days on a single charge on single use.

Xiaomi has priced the Mi Band 7 Pro at CNY 379 (~Rs 4,499) at launch in China. The retail price of the wearable is CNY 399 (~Rs 4,700) and will come into effect after the first sale. You can choose from a variety of premium silicone bands, including green, blue, orange, pink, and white. There’s no information on when Xiaomi plans to bring the wearable to the global markets.