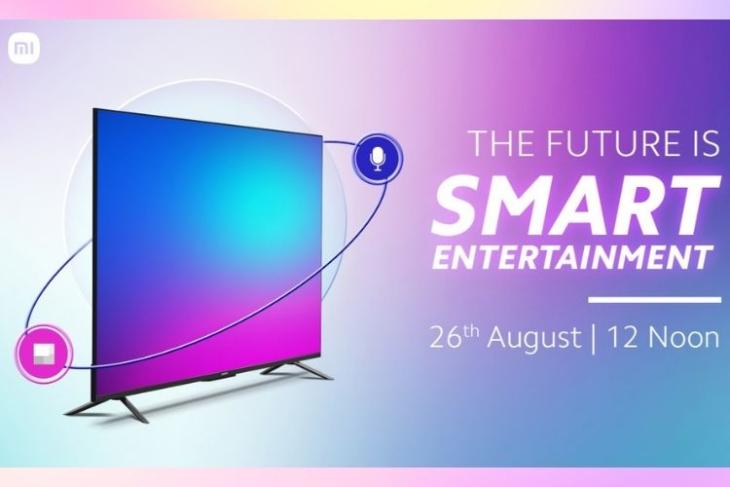 Xiaomi recently announced that its Smarter Living 2022 event will be held on August 26 in India. The company has already confirmed that it will unveil a new Mi Notebook, Mi Band 6, a Wi-Fi router, and a security camera at the event. And today, Xiaomi has teased that the Mi TV 5X series will also be announced at the upcoming virtual event.

The company took to Twitter to tease the upcoming smart TV. It also shared the link to the landing page of the smart TV on its official website. As per Xiaomi, the Mi TV 5X will deliver “the audio and display experience of a lifetime” for users to enjoy their favorite shows and movies. You can check out the tweet right below.

Brace yourselves, here comes the #MiTV5X 🤩
We took it very seriously when we said #FutureIsSmart with #SmarterLiving2022! 😏
Get ready for the audio and display experience of a lifetime with this one 🤯💯
Head here for more: https://t.co/tR3tsWCxBs pic.twitter.com/o1g9O0SmGF

Now, although not much is known about the Mi TV 5X at the moment, it would most likely be the rebranded Mi TV ES 2022 series that launched in China recently. Xiaomi has made the Mi TV ES 2022 series available in four screen sizes, including 43-inch, 55-inch, 65-inch, and 75-inch, in China. However, we do not know whether or not Xiaomi will bring all these size variants to India.

The Mi TV 5X will be the successor of the premium Mi TV 4X line that was launched back in 2019. It will feature a truly bezel-less display, as per the landing page Moreover, by the looks of it, the TV might come with a premium aluminum chassis to house the internal components. Moreover, as the Mi TV 4X features a 4K LED panel with HDR 10 support, we can expect the Mi TV 5X to boast a similar display as its predecessor.

Furthermore, Xiaomi says that the Mi TV 5X’s display will be fine-tuned and the visuals will be responsive to the environmental lighting. So, it might feature the company’s proprietary Vivid Picture Engine technology to brighten the colors and deliver deeper contrast for an immersive viewing experience.

The Mi TV 5X might also come with the company’s Reality Flow Engine, which is a dedicated chipset to enable MEMC (Motion Estimation/ Motion Compilation) technology for digitally upscaling low-FPS content. Plus, there will be far-field microphones aboard the TV to support Google Assistant for voice commands without the need for the remote.

Other than this, the 5X series will deliver an amazing audio experience by leveraging the best Dolby technologies. This might include support for Dolby Atmos and Xiaomi’s own sound technology. As for content discovery, Mi TV 5X will come with a new generation of Xiaomi’s PatchWall UI.