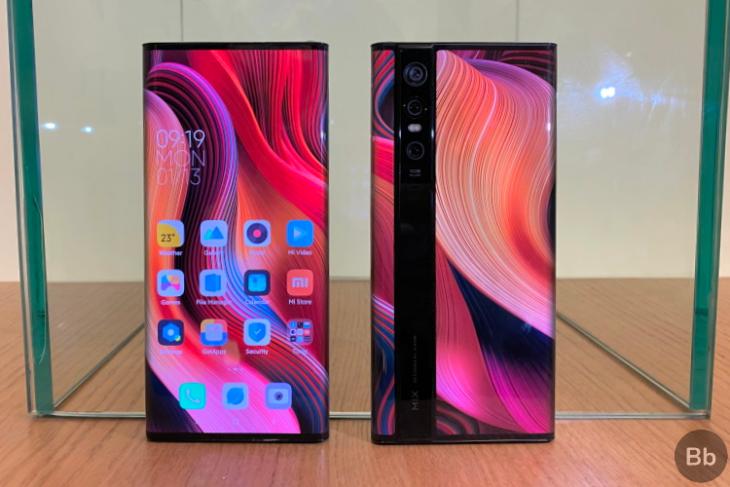 Xiaomi kicked-off the Mix lineup back in 2016 with one purpose in mind – push the screen to the edge and minimize the bezels. The original Mi Mix was one of the first futuristic truly bezel-less phones to hit the market. It was a concept that worked and garnered immense popularity, such that it was followed by the Mi Mix 2 (which also landed in India) in 2017 and Mi Mix 3 with the highest screen-to-body ratio and the slider design back in 2018.

I’m not gonna lie, I was slightly enamored with the wraparound idea when I first saw the livestream but seeing the Mi Mix Alpha in person earlier this week reassured me that it’s definitely an eye-candy.

One look at the Mi Mix Alpha is enough to captivate you. While most phone makers are attempting to perfect the foldable form factor, this concept device breaks the mold and offers you something equally futuristic. Mi Mix Alpha boasts a truly bezel-less design, thanks to the crazy wraparound design, no selfie camera, a piezoelectric earpiece, and sensors baked under the display.

Mi Mix Alpha features a 7.92-inch pOLED panel (same as the Galaxy Fold), which Xiaomi refers to as 4D Surround display. It boasts a 2088 × 2250-pixel resolution and an unbelievable 180.6 percent screen-to-body ratio. I couldn’t get too touchy-feely with this new concept phone but in my brief time, I realized that it should have a great in-hand feel but is more fragile than it looks.

I mean, it’s a concept and it can have its own shortcomings but the wraparound display technology is not quite there yet. We have already seen the display on the Galaxy Folds breaking even before launch. You have to be super careful with the Mix Alpha. 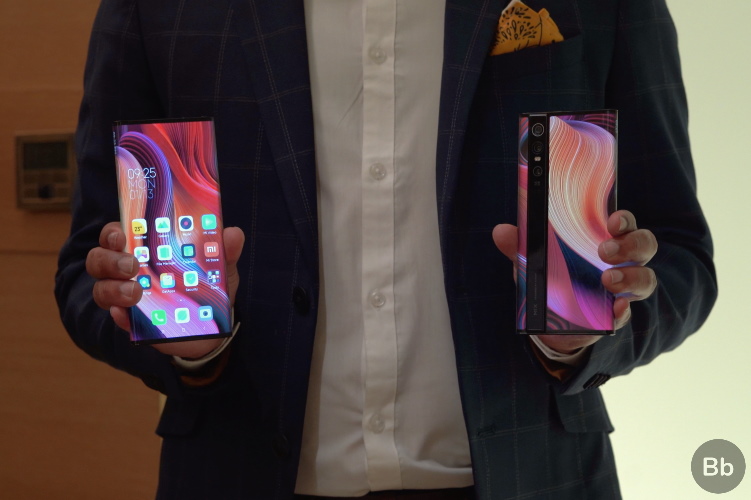 The display covers almost the entirety of the device, which is clad between the titanium alloy frame, which gives it some extra heft. There’s minimal bezels and the vertical strip which houses the cameras, Wi-Fi and 5G antennas, and more. It’s a ceramic back panel with sapphire glass on top to protect the camera lenses against scratches. You will find a pair of pressure-sensitive buttons on either edge, similar to the Vivo Apex (2019) concept, a power button up top, and a USB Type-C port at the bottom. 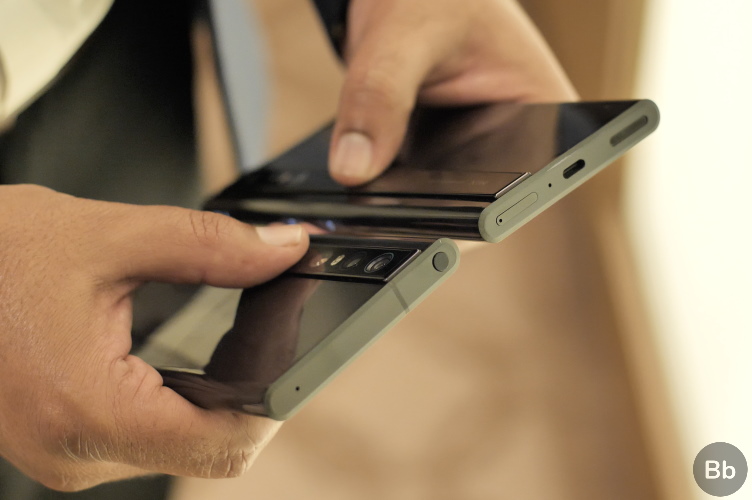 What’s the Rear Display for?

I know, one of the biggest queries with Mi Mix Alpha is – what would the wraparound display on the rear be used for? I bet you have already figured out that one of the most obvious use-cases is clicking high-res selfies and vlogging. You can see below that Mi Mix Alpha asks you to flip over on switching to the selfie mode.

In addition, Xiaomi told us that the software has been adapted to the concept. It will use real-time AI scenario detection to display you relevant information when you flip over the device. It usually shows you the guide page with your calendar events, step tracking, and more. But, you can continue scrolling Instagram or Twitter on the main screen and find the cab details when you book an Uber, flight details while heading to the Airport, and more on the rear screen.

There are no selfie cameras aboard the Mi Mix Alpha and that’s pretty evident. The device only includes a triple camera module on the rear and it’s used for selfies too – as seen above. The camera lenses are protected by sapphire glass on-top to safeguard this fragile concept against scratches. 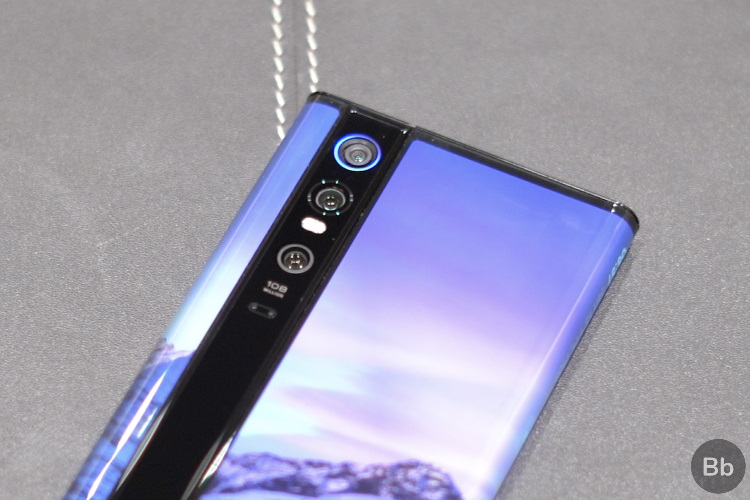 Finally, let me give you a quick brief about the internals. Mi Mix Alpha is backed by the Snapdragon 855 Plus chipset, coupled with 12GB of RAM and 512GB of UFS 3.0 onboard storage. This is enough firepower for the crazy wraparound display that runs a custom build of MIUI. 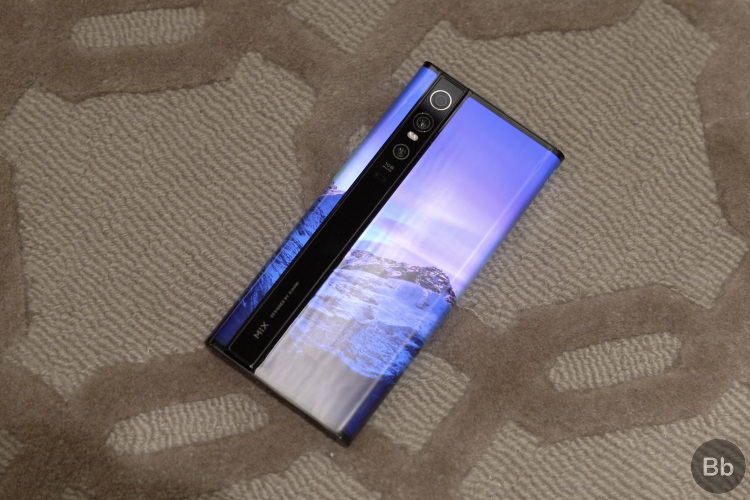 The Mi Mix Alpha demo units that I went hands-on with were running a global beta build, which was still a work in progress. It wasn’t any different from the MIUI build I’ve been using on my Redmi K20, except for the customizations to support the rear display, edge notifications, and mis-touch detection. Xiaomi is using a multi-sensor array and AI algorithms to avoid ghost touches and in my brief encounter with the device, it seemed pretty decent.

Mi Mix Alpha is also equipped with a 4,050mAh nano-Silicon cathode battery that provides juice to your wraparound display. It supports 40W wired fast-charging via the USB Type-C port on board and no wireless charging due to design limitations. We cannot talk about the battery without giving you a look at the crazy charging animation, where the whole screen lights up and gradually fills up to show you the battery level. It’s one of my software features on the Mi Mix Alpha.

Mi Mix Alpha: Is This What The Future Looks Like?

Mi Mix Alpha is one of the most futuristic concept smartphones that I have had the chance to experience in person. It’s still unbelievable how Xiaomi has taken a flexible display and wrapped it around the entire body, sort of putting an end to the screen-to-body ratio war.

Now, Mi Mix Alpha may be a concept phone but Xiaomi is selling it for 19,999 yuan, which is around Rs. 2 lakhs in China. We did inquire the company about its plans to bring Mi Mix Alpha to India and well, the answer is a no-brainer. Mi Mix Alpha is not launching in India. For a closer look at the Mi Mix Alpha, check out our hands-on YouTube video:

Now, if you want a look at the Mi Mix Alpha, Xiaomi told us that it’s planning to polish the software and will soon start showcasing its futuristic concept device at its Mi Home stores across India. The devices will sit inside a glass enclosure (you won’t get a hands-on with Mix Alpha) but it will still give you a glimpse at what the future beholds.