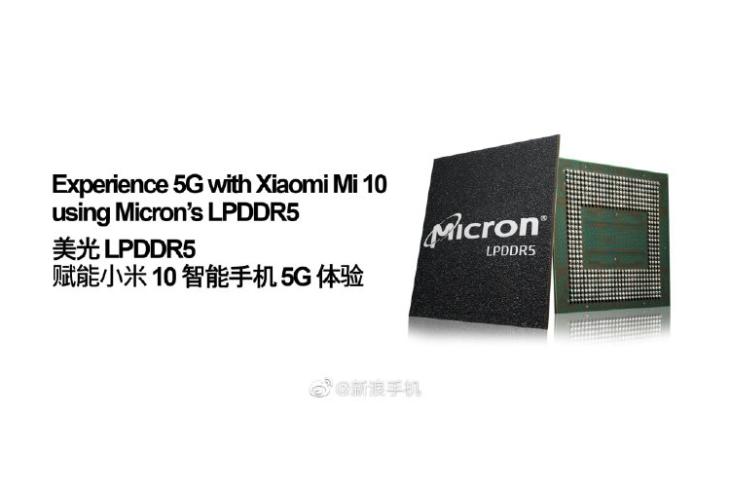 Micron Technology has announced that it has started mass production of the world’s first low-power LPDDR5 DRAM chip targeted at the flagship smartphone market. The company says that its new memory chip would debut in Xiaomi’s upcoming Mi 10 series.

The LPDDR5 DRAM offers a transmission rate of up to 6.4Gbps, which is almost twice of what the current LPDDR4 standard offers. It is about 20% faster than LPDDR4x DRAM and offers a 50% faster data access speed. You can see the jump in performance in the graph tweeted by Zhiyuan Zang, Xiaomi’s Deputy GM of Marketing.

In terms of power efficiency, the LPDDR5 chip is 20% more power efficient when compared to its previous-generation counterparts. According to Micron, LPDDR5 would help extend the battery life up to 10 percent, thanks to the fast app processing and overall speed.

While LPDDR4 is sufficient for 4K, 8K images, photo editing, the performance is not up to the mark when it comes to AR games, 100MP imaging, and high-end video editing. DDR5 addresses these concerns and offers better performance. In fact, Micron claims that the LPDDR5 chip is capable of simultaneously handling 100 apps without any hiccups.

LPDDR5 is designed to work well with 5G applications and use-cases. The chip will supply the speed required by dedicated AI engines of mobile processors. With LPDDR5, we could expect enhanced machine learning capabilities in future smartphones, says Micron.

Micron hopes to supply 8GB and 12GB RAMs for phones in the first half of the year while it will shift its focus to 16GB RAM in the second half of 2020. We could be seeing many 16GB RAM devices by the end of the year including the Mi 10 Pro and Nubia Red Magic 5G.

In case you’re unaware, Xiaomi’s Mi 10 is rumored to launch on the 11th of February, the same day as Samsung’s Galaxy Unpacked event. The Galaxy S20 series is tipped to sport LPDDR5 DRAM as well. Technically, this could make Xiaomi’s Mi 10 the first smartphone to launch with the LPDDR5 DRAM but Samsung fans probably won’t be left behind.