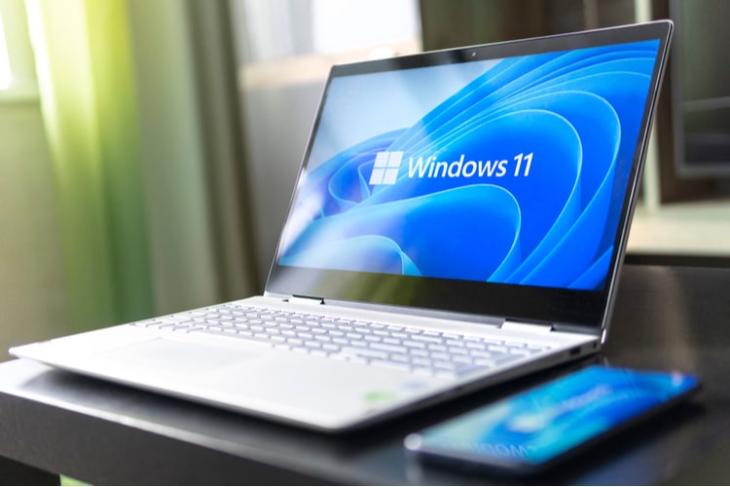 Windows 11 has got another Insider Preview Build, version 22563 for the Dev Channel. This update brings several new features such as a tablet-optimized taskbar, some improvements to widget content, and more. Here’s a look at everything new that has been brought to the table.

Firstly, the update adds a new taskbar, which is specially made for the tablet and touch mode. This version of the taskbar will appear when a user disconnects or folds the keyboard of a 2-in-1 device to make room for two states of this taskbar: collapsed and expanded.

The former version will squeeze the taskbar to make room for more display space and will provide access to only important status icons. As for the latter mode, it will make the taskbar more accessible and easier to use with a touch gesture. Users will be able to swap the modes by swiping up or down from the bottom part of the display.

The ability can be accessed by heading to the Settings -> Personalization -> Taskbar -> Taskbar behaviors, and selecting the new option of “Automatically hide the taskbar when using your device as tablet.” It will be enabled by default.

Windows 11 Build 22563 also brings some changes for widgets, which will now include news feed content to allow users to easily find and access new widgets and news content via their feed. The aim is to bring more dynamic content to widgets. More personalizations are expected to reach soon.

There’s also a new group policy for IT admins and students. Windows 11 will have the ability for IT admins to turn off the Windows Update notifications so that students don’t get distracted. For this, the admins can simply open Group Policy Editor and go to Computer configuration -> Administrative Templates -> Windows Components -> Windows Update -> Manage end-user experience -> Display options for update notifications.

Windows 11 Build 22563 has also brought a minor change to the multitasking experience. Now, when you snap a Microsoft Edge tab, your Windows 11 PC will display the most relevant tabs to use together in Snap Assist. Users can always customize this feature from Settings -> System -> Multitasking. Additional changes include more options for Quick Access search, Emoji 14.0 for 37 new emojis, updated accessibility flyout on the login screen, and a number of fixes. You can check the details out from over here.

The new Windows 11 Insider Preview Build 22563 has started rolling out to Insiders and should not be confused with a regular update, just like the one that was released last week. Hence, it will take some time for these changes to be released to the general audience. If you are able to use these features via the Insider program, do let us know your thoughts about them in the comments below!

How to Connect AirPods to Windows 11

How to Enable or Disable Search Highlights in Windows 11