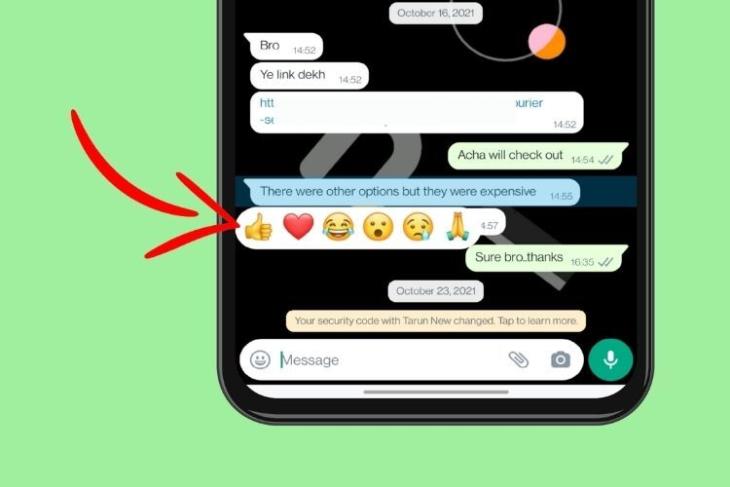 WhatsApp has been developing a message reaction feature for its messaging platform for quite some time now. We saw a preview of the feature, thanks to tipster WABetaInfo, last month. Now, it seems like the Meta-owned entity accidentally rolled out a half-baked and non-functional version of the message reactions feature with the latest WhatsApp Android beta update.

Recently spotted by reputable tipster WABetaInfo, the message reactions feature is live on the latest WhatsApp beta version 2.21.22.17 on Android. However, it seems like the company rolled it out by mistake as it does not work as intended just yet.

Now, for those unaware, the message reactions feature lets users react to chat messages on WhatsApp with an emoji. You can long-press a message in the chat window to bring up an emoji reactions pop-up and tap on any of them to react to the message. It is similar to what we already have access to on Twitter and Instagram DMs.

Coming to the feature that is currently live in the WhatsApp beta, it is essentially an underdeveloped version and does not work as of now. Although a long press on the message does bring up the emoji reactions pop-up, tapping the emojis does not do anything.

Anmol from our team tried it out on his OnePlus Nord running Android 11, and you can check out WhatsApp’s message reactions feature in action via the GIF attached right below.

So, as you can see in the preview above, the half-baked message reactions feature does show up in WhatsApp but it is broken. However, as the feature has already appeared in the latest beta, chances are WhatsApp might roll out the fully-functioning version sooner rather than later. So, stay tuned for more information and let us know your thoughts on this new WhatsApp feature in the comments below.