Skip to content
Home What is What is UFS 3.0 and What Does It Bring?

Smart devices have come a long way in terms of storage options with regards to their speed and performance. Typically, smartphone and tablets have been using eMMCs to store information. But if you’ve recently bought a flagship device from Samsung, OnePlus or Sony, you must have come across the term UFS storage. UFS has been branded as the future of storage standards, and recently, news of its latest version, the UFS 3.0, being in development is doing the rounds. But what exactly is UFS 3.0 and how does it work? If you’re intrigued by the same questions, read on, as we discuss what all changes UFS 3.0 brings to the table. But before we get to that, let us discuss what exactly is UFS:

Universal Flash Storage or UFS is a common flash storage specification for digital cameras, mobile phones, and other consumer electronic devices. The main idea behind UFS is to bring higher data transfer speed and increased reliability to flash memory storage. The UFS standard has been developed by the JEDEC Solid State Technology Association. 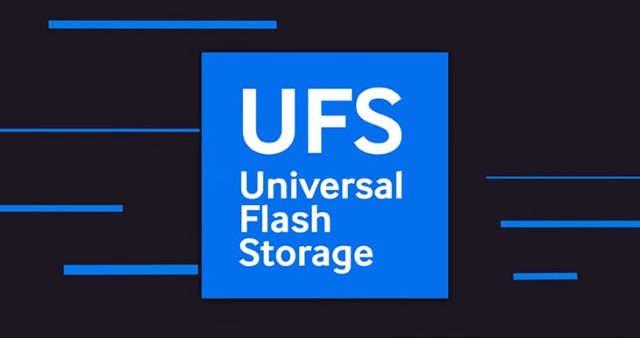 The way UFS works is by offering high-performance benefits of the SATA interface used in PCs combined with the flash-optimized low power consumption of eMMC. Also, unlike previous storage standards such as eMMC and ePOP, the UFS is based on the SCSI architectural model and supports SCSI Tagged Command Queuing, which allows the operating system to send multiple read and write requests to the storage. 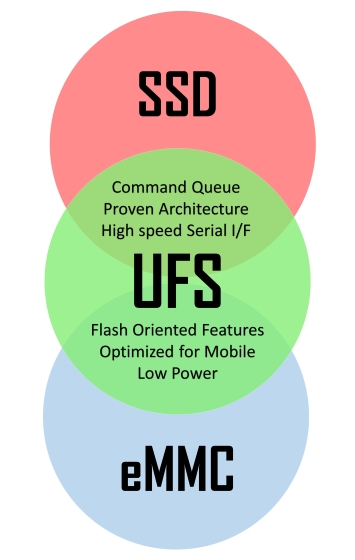 UFS works at combining the highest level of performance with quality, providing consumers with a better overall user experience. The next generation of flash storage offers a faster data input/output response that results in snappier booting, quick file transfer, and much faster data copying. For a normal user who does not want to get into the technicalities, UFS promises seamless multitasking that allows you to watch high-quality videos, play high bandwidth games, along with running multiple processes in the background, all without any interruption in functionality. 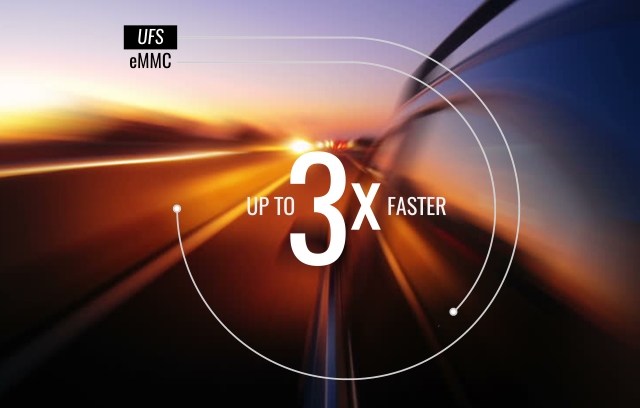 The UFS boasts of significant improvements in performance over the previous standard for storage, eMMC (embedded Multi-Media Controller). UFS features an LVDS (Low-Voltage Differential Signaling) serial interface, that has separate dedicated read and write paths. Basically, while eMMC has a half-duplex interface that only allows either read or write, UFS has a full-duplex interface that allows for simultaneous read and write, at the same time.

Furthermore, UFS also has a Command Queue (CQ), which effectively sorts out all the operations and/or commands to be carried out. What this means, is that multiple commands can be addressed at the same time and the order of tasks can be changed accordingly, in real time. On the other hand, eMMC, which does not feature CQ, needs to wait for a process to be completed before moving on to the next one. All of this helps UFS kick the eMMC storage right off the park.

Even though the UFS Standard was introduced back in 2011, UFS cards started rolling out only in the year 2016, when Samsung introduced the first UFS cards in 32, 64, 128, and 256 GB storage capacities, based on the UFS 1.0 Card Extension Standard. Since then, more and more companies have started rolling out their UFS Cards and storage options. As for the UFS versions, it was upgraded to UFS 2.0 in 2013 and UFS 2.1 in 2016. Recent high-end phones are using UFS 2.1.

The next standard in the world of UFS is UFS 3.0. The version 3.0 aims to improve upon the v2.1 by increasing the layer stacking from 48 to 64. Additionally, it will be a 3-bit V-NAND flash memory chip, bringing down the power consumption from 3.3V to 2.8V.

As noted above by the electronic group ‘Phison’, the UFS 3.0 will be carrying exceptionally high-performance rates. While the maximum throughput bandwidth for UFS 2.0 and UFS 2.1 are 800MB/s and 1333MB/s respectively, UFS 3.0 will carry a phenomenal bandwidth of 2666MB/s, which is just double of its predecessor. That being said, UFS 3.0 is still in the works, and it will take a couple of months for the standard to be officially announced. Considering it took smartphone adapters a while to adapt to the UFS 2.1 standard (Qualcomm’s Snapdragon 835 was the first processor to support it), only time will tell when the UFS 3.0 standard will be adopted by device manufacturers for the average consumer.

Ever since its first introduction in 1984, flash memory has come a long way – from pen-drives to SD and microSD cards to super fast SSDs and eventually eMMCs. The newest member to the NAND flash memory is the UFS standard, and the future ahead certainly seems bright. With raw performance almost triple of that of eMMC, UFS is certainly shaping up to be the choice of most device manufacturers. Many modern devices such as the Galaxy S8/S8+, Xperia XZ Premium, OnePlus 5, Huawei P10 Plus have UFS 2.1 Storage, which allows them to get speeds as high as 800MB/s. With UFS 3.0 in its developmental stages, the next generation of mobile computing is definitely going to be faster than ever. Tell us what you think of UFS and what does the future of mobile computing hold in the comments section below.