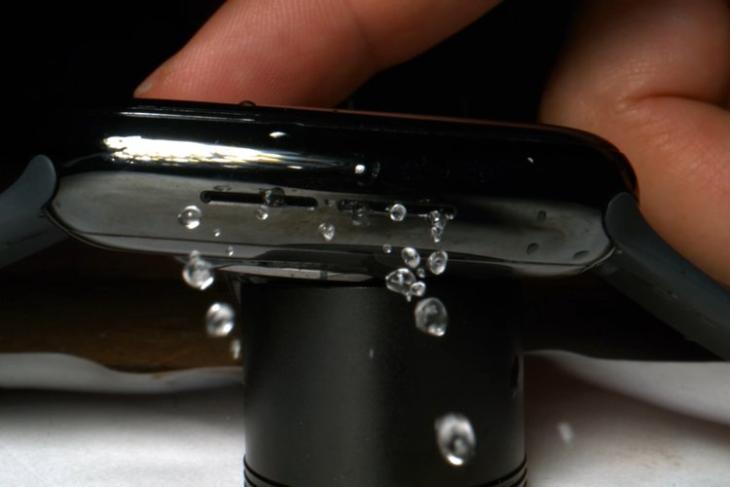 The Apple Watch apart from being one of the most popular Apple devices is also a pretty tough smartwatch. The smart wearable device by Apple comes with a water resistance of 50ATM and is designed with swimmers and water-sports enthusiasts in mind. However, to protect the internal components of the watch, Apple added a pretty nifty “Water Lock” feature, that we explained in our definitive Apple Watch icons guide. So recently, popular YouTube channel, The Slo-Mo Guys, used this feature to capture a scene of an Apple Watch ejecting water in (very) slow motion.

Now, the “Water Lock” feature in the Apple Watch is a pretty useful feature for swimmers and people who engage in water-based activities. Users can turn the feature on from the watch’s Control Center. After turning it on, the Apple Watch will lock the screen to prevent any accidental touches underwater. And once the user is out of the water, he/she can turn the digital crown of the watch to turn off the feature and the watch will eject the water inside through the speaker grills.

So, Gav, who is the host for the aforementioned video, to test this feature and capture the scene in slow motion, went for a swim in his bathtub (seriously!) wearing his Apple Watch with “Water Lock” turned on. After the swim, the slo-mo guy put the device under a bright light and used a probe lens to shoot a video of the watch ejecting tiny droplets of water through its speaker grills at 2000 frames per second. You can check out the video below.

Now, the way the Apple Watch ejects the water inside is quite fascinating and looks pretty dope, especially in such high frames per second. According to Gav, the device’s speaker vibrates at a certain level that pushes the water out of the watch.

Now, when he observed the process in slow motion, he noticed that once the first burst of water comes out, the remaining water still stays inside as it gets sucked in by the vibrating speaker again. So, for a brief moment, the speaker lowers the level of vibration to retain the water and then again creates a burst to eject it. This happens 10 times before all the water finally gets out of the watch, according to the host.

The video is pretty interesting and watching those droplets of water eject from the watch made me all warm and fuzzy inside. It has quite a soothing effect on the brain and I think you should check it out.