Let’s be real, for immersive VR gaming, you need additional hardware like a controller or an expensive headset similar to Oculus. However, with the introduction of Google Cardboard and Daydream, it has become easier to play VR games using the headset itself. While the gameplay is not as interactive as you would want, it surely gives a thrilling sensation which feels like real-life adventure. So in this article, we have found the 8 best VR games that you can play without a controller either using Gooogle Cardboard or any other inexpensive headset. With that said, let’s begin the article without further ado.

Best VR Games You Can Play Without a Controller in 2019

Here, we have mentioned 8 VR games that don’t require a gaming controller and can be played using Android or iOS devices. All you need is a Google Cardboard compatible headset, preferably with a trigger button. Also, most of the mentioned games are inexpensive so no need to worry about the pricing. With that said, here are the best VR games that don’t need a motion controller.

VR Roller Coaster is one of the best VR games to play without a controller and it’s available on both Android and iOS. You just need Google Cardboard support or Daydream on your device and you are good to go. The game gives you a real-life feeling of riding a roller coaster and frankly it’s awesome. There are also many scenarios like speed slow down, inversions and steep slopes which can be controlled by the headset. And that is not all, the simulation is near-perfect with more than 60 railroad track from amusement parks which gives an eerily real-life sensation. So just download this VR game and you are all set to enjoy it without a controller. 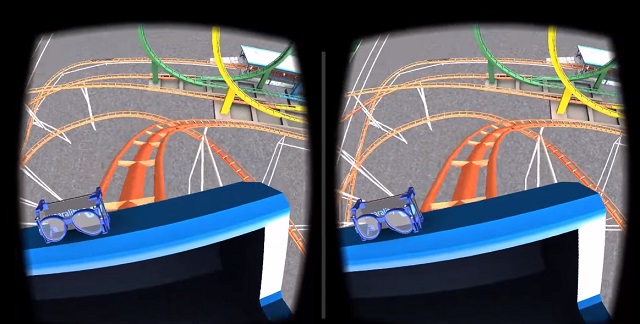 If you love racing then VR X-Racer is among the best VR games you can play with just your headset. It has stunning 3D graphics which makes the gameplay a hell lot like real-life and makes for an intense racing adventure. This game supports motion sensing so you can just move your headset to navigate and whiz through the racing track. And the best part is that besides other riders, there are a couple of obstacles on your way which you have to face while riding at a rapid speed. All in all, VR X-Racer is quite good and comes with great 3D visual effects. You should not miss this game at any cost. 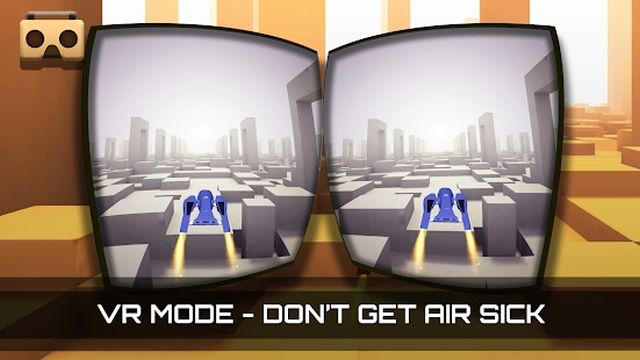 Smash Hit is one of the most popular VR games which does not require a gaming controller. It’s a three-dimensional game where you have to take a journey through glass structures which often break and create obstacles along your way. In all of this, you will have to smash the glass objects on your path with high accuracy so that it does not fall back on you. The structures are quite futuristic and the audio effect makes the whole experience even more otherworldly. The game has 50 glass rooms with multiple styles of graphic rendition so you can choose whichever one you find most fascinating. To sum up, you should definitely play Smash Hit and experience a futuristic world made of glass objects. 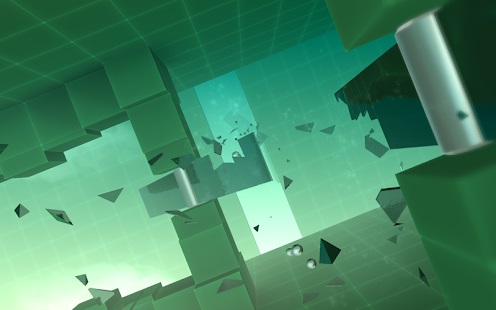 If you use an iPhone, End Space is the VR game you should not miss at all. The game is high on visual effects and has great 3D graphics to make you feel like you are in a space station. The theme of the game is to protect your space ship from the galactic enemies. The game lets you shoot at your opponents with a trigger button on the headset. And in case, your headset does not have it then you can enable the gaze shooting feature from the headset settings panel. The battle is pretty immersive and deep space battle makes for an entertaining game. So, go ahead and play End Space VR game without a controller on your iPhone and experience VR gaming at its best. 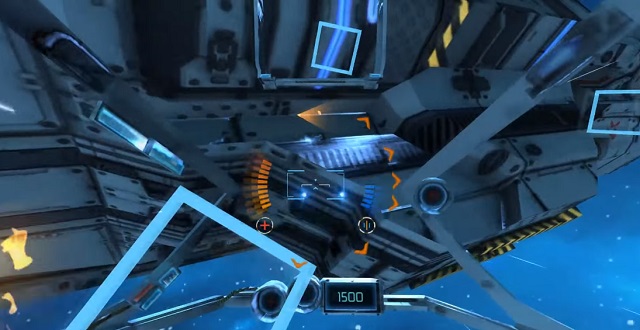 Snow Strike VR is quite an enjoyable VR game that you can play without a controller. It’s not the best in terms of high-quality visual effects, however, the mechanics are wonderful with this game. Also, if you love playing Minecraft, this is closest you can have in VR. The theme of the game revolves around the snow fort where you have to defend it from rogue enemies. You have to throw snowballs at evil snowmen from your ice tower using your headset and it works quite good. Also, you will have to dodge snowballs thrown by the enemy by moving your headset. As I said, if you want to play a VR game without a controller, Snow Strike VR is a fun game. 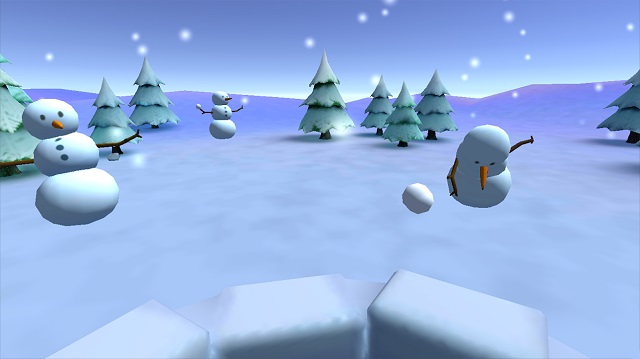 Trooper 2 is a relatively new VR game but has garnered lots of positive reviews from the audience. The game is only available on Android devices with Google Cardboard support and does not require a controller. However, you need to have a magnetic trigger on your Google Cardboard headset to play this game. As for the game, it’s quite intense and follows a linear path of one opponent at a time. For sure, you get a 360-degree view of the game and that works really great. However, the best part is its instinctive awareness feature that gives a real sensation with 3D sound effect. You will feel like you are in a real battle zone and fighting off the enemies. Simply put, if you like PUBG Mobile or shooter games in general then Trooper 2 is a worthy VR game to try. 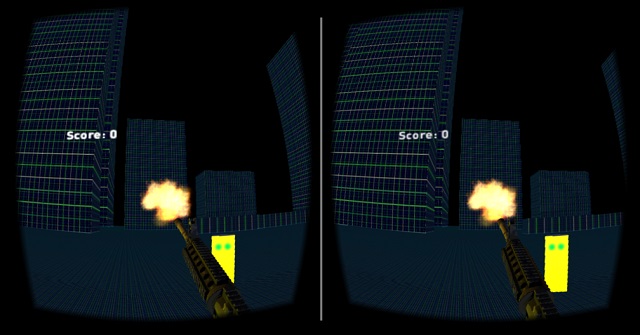 VR Racer is another racing game which you can play in VR without a controller. It’s a simple racing game where your headset is used as a motion navigator and it works quite good. There are a series of cars and streets available from all around the world with realistic traffic to give a sensation of real life. In terms of gameplay, it’s quite smooth and you will for sure experience the thrill when you are moving at a breakneck pace. It uses gyroscope from your device for steering purpose and does a wonderful job at that. Also, to select a car or map, you can just stare at an option and it gets selected. Awesome, right? So, if you want a high-racing game with intense visuals, you can give VR Racer a shot. 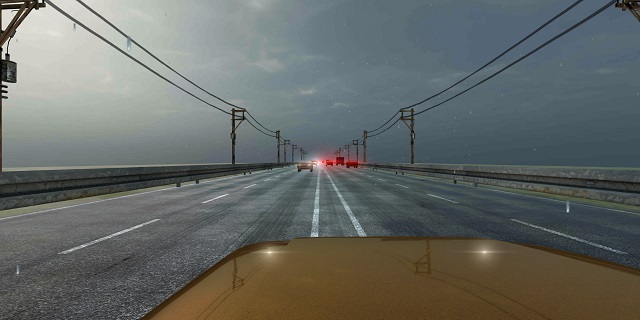 VR Street Jump is a simple VR game which does not need a game controller, but you need to have a compatible headset with a trigger button. The game begins on the road and you have to safely cross the street evading vehicles and heavy traffic. As you play along, the traffic increases and so does your chance of getting killed by speeding vehicles. The game offers a 360-degree view of your surrounding making it quite real-life and immersive. Other than that, the game has voxel like animated characters which looks really good and brings back memories of the frogger arcade game. To conclude, VR Jump Street is an effortless VR game and you can definitely play it if you have time to burn. 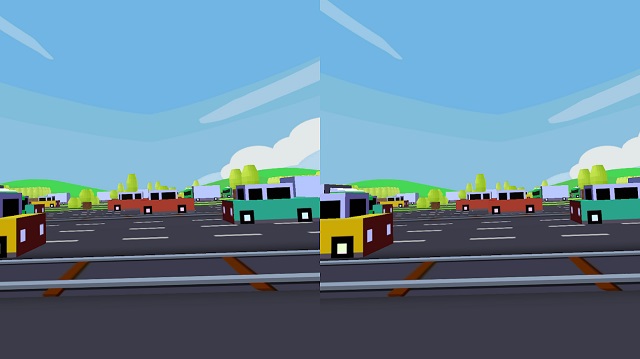 Experience The Best VR Games Without a Controller

So that was our list of 8 best VR games which don’t require a gaming controller or an expensive headset. You can play the games on Google Cardboard or any compatible headset. However, if you are serious about VR gaming then Oculus is a solid pick and you should definitely go for VR dedicated headsets. Anyway, that is all from us. If you liked our article, do comment down below and let us know your opinion.

Beat Saber Is Probably the Sickest VR Game of All Time