USB On-The-Go (popularly known as USB OTG) is undoubtedly one of the coolest features of Android (although few other devices support it too). It’s a standard that allows USB OTG compatible devices (e.g. almost all modern Android devices) to act as “hosts” or controllers for other USB gadgets, such as keyboards/mice, flash drives, and even game controllers. This essentially means that Android devices don’t need a computer to act as host for interfacing with other USB devices, and act like mini-computers themselves.

Thanks to USB OTG, you can expand your Android smartphone’s functionality in numerous ways, and use it to do extremely cool things like accessing data stored on Flash drives, and even charging other phones. But is that all?

Not by a long shot, and that’s why this article rounds up some unique and cool USB OTG uses. But before we even get to the listing, here are some important things you need to keep in mind.

1. Use Mice/Keyboards with Android Phone

Feel like navigating your Android smartphone with a mouse, just like you do on a PC? Not a problem, simply hook up a USB mouse to the phone via a USB OTG cable, and you’re good to go. This can come in really handy for data recovery, especially in situations when the device’s touchscreen is damaged. Similarly, you can connect a USB keyboard to the phone and use it to compose/edit text documents, email etc. in a much better way. Check out the embedded companion video. 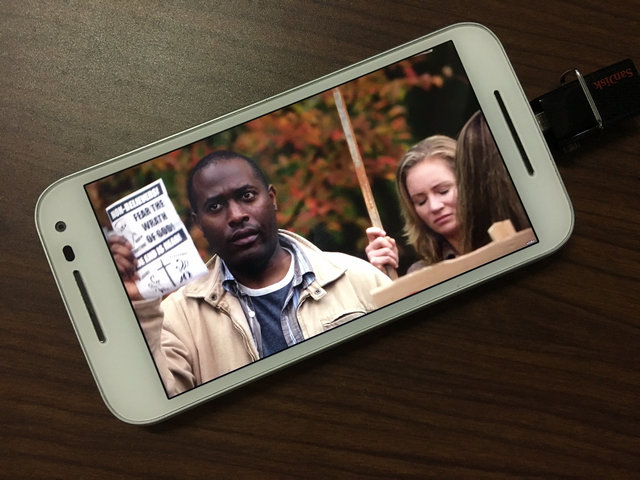 This can be helpful when there’s some important data on your Android phone that you want to copy to a USB flash drive (or vice-versa). Just connect the flash drive, and use one of the many file manager apps to move/copy data. You can also use this feature if you have certain media (songs, movies etc.) that you want to enjoy on your smartphone, without the hassle of transferring it to the phone’s storage. How cool is that?

Preferred by pro photographers (and these days, even beginners), DSLR cameras offer best in class image quality, complete with extensive manual controls, and a range of accessories. However, you can also control your DSLR camera and granularly tweak its manual controls using your USB OTG connected Android phone, via numerous apps available for the same. One such app is DSLR Controller, which can be used to adjust focus, zoom control, shutter speed, ISO, and then some more, directly from the Android smartphone. It can even be used to record Time lapse videos.

Smartphone games are getting better and more powerful by the day. That being said, the on-screen controls offered by these games are frustrating at best. But don’t worry, as USB OTG lets you connect many game controllers to your Android device and game like a pro. This comes in especially handy when playing racing, action/adventure and shooter games. While most game controllers work directly, some require your Android phone to be rooted. Take a look at the companion video, showing an Xbox 360 controller being used to play GTA: San Andreas on an Android phone. Pretty sweet, right?

When it comes to accessing Internet on smartphones, Wi-Fi (or cellular data) is generally the way to go. But there might be times when you can’t have access to wireless Internet. No problem, as you can access wired Internet (generally called Ethernet) on your Android device as well. To do this, you not only need an OTG cable, but also a USB Ethernet adapter.

Normally, printing documents requires you to either use a computer program (e.g. Microsoft Word), or copy the documents to be printed to a USB flash drive, and connect the same to the printer’s USB port. But why go through the hassle, when you can connect the printer directly to your Android smartphone, via USB OTG. However, for this, you also need an app called PrinterShare. It can download drivers for the USB printer(s) to the phone, after which it can be used to print the documents, photos etc. stored on your Android phone. PrinterShare also includes advanced options for changing fonts, paper size, and a lot more. See the embedded video illustrating the action.

9. Use Your Android Smartphone to Charge other Phones

In what might be one of the most interesting uses of USB OTG, it can be used to have one Android phone charge another phone. All you have to do is connect the two phones, and the phone acting as the USB host (the one directly connected to the USB OTG cable) will start charging the other device. This can be really helpful in emergency situations when your phone’s battery runs out, and you don’t have a charger or wall socket around. Even non-Android devices such as iPhones can be charged via this method.

10. Use USB Accessories with Android Phones

Thanks to the ubiquity of the USB interface, there are countless accessories available for it. And with USB OTG, using them with your Android smartphones has never been easier. Want a little cool breeze on a hot summer afternoon? Use this portable fan with your Android smartphone. Or how about an LED light to find something in the dark? The possibilities are endless.

Whether you’re an aspiring singer or a budding YouTuber, having a good microphone is essential to get the best recording quality. There are many great microphones (like the Windows/Mac compatible CAD U37) available, that use the USB interface. And with USB OTG, they can be used with Android smartphones just fine. It’s quite easy, and there are many apps (e.g. USB Audio Recorder PRO) available for the same. These apps include a host of advanced functions, such as the ability to tweak audio buffer, playlist management, change audio channels, and then some more.

After getting a new smartphone, one of the first things to be done is to set it up. Generally, this includes transferring your contacts, messages, and other settings from the old device to the new one. And with Samsung’s SmartSwitch app and USB OTG, getting your new smartphone up and running is a cakewalk. The SmartSwitch app lets you transfer messages, contacts, call logs, and much more between not just Android devices, but iPhones and Blackberry devices as well.

Note: The type of content that can be transferred via USB OTG through Smart Switch depends on the devices. For detailed information, click here.

Do more with USB OTG

USB On-The-Go is indeed a powerhouse feature that lets you use your Android smartphones in more ways than possible. And as discussed above, it’s not really that hard either. So what are you waiting for? Try out all of these tricks, and see which one(s) you find to be the most useful. Know of any other USB OTG uses that could’ve made it to the list? Don’t forget to mention in the comments below!

How to Fix USB OTG Issues in Android Devices

How To Check USB OTG Support For Your Android Phone