The Complete Guide to Mechanical Keyboards for Gaming

As is evident from their name, membrane keyboards use membrane switches, which are pressure pads printed on a flat and flexible surface. That’s unlike mechanical keyboards, which include separate, moving parts to actuate keystrokes. There are two types of membrane keyboards, i.e. flat-panel and full travel. While the former is common in appliances like microwave ovens and washing machines, the latter is the most widely-used computer keyboard technology.

Full-travel membrane keyboards work by electrical contact between the keytop/switch plungers and the underlying circuits when you press a key. They typically offer very little feedback and are nowhere near as pleasant to use as their mechanical counterparts. However, they account for the vast majority of consumer keyboards in use at homes, offices, educational institutions, and pretty much everywhere else.

As for mechanical keyboards, they include separate mechanical switches under each keycap. Each switch comprises a housing, a spring, a stem, and sometimes other parts, such as a separate tactile leaf or a click bar. Mechanical switches come in three distinct types: Linear, Tactile, and Clicky.

When actuated, mechanical switches mostly offer you pleasant tactile feedback, enabling the user to know that their keystroke has been registered. Depending on the technology in use, the keystrokes can either produce a clicking noise or remain silent. Both of these types having their fair share of supporters and detractors.

Another key difference between mechanical and membrane keyboards is longevity. A typical mechanical keyboard can last for up to 50 million clicks per key, with Cherry claiming up to 100 million actuations for some of their switches. Membrane models, on the other hand, tend to top out around 10 million actuations. What’s more, mechanical keys can be replaced one at a time once they start wearing out, whereas cheap membrane keyboards are use-and-throw, which adds to the global e-waste problem that’s already spiraling out of control.

1. Linear switches come with consistent resistance, which means they feel the same from the time a user initiates a keypress until the moment it bottoms out. There is very little tactile feedback and no noise when you hit the actuation point.

2. Tactile switches, as you can tell by now, offer tactile feedback every time a keystroke is registered. The so-called ‘bump’ during a keypress is generally silent, making them great to use at offices and while working at night.

3. Clicky switches not only offer a clear bump on every valid keypress but offer an audible ‘click’ as well. The main advantage of clicky switches is that you don’t have to push the key all the way down and can release the key immediately on getting the feedback.

Notable companies that use their own mechanical switch technologies for their keyboards include Razer, Logitech, Topre, etc. Meanwhile, companies like Greetech and Kailh make high-quality Cherry MX-style switches at a much lower cost and are extremely popular in low-cost mechanical keyboards.

Switches from Greetech and Kailh are also often used to replace original Cherry MX switches in keyboards. It’s because they look and feel identical to the originals. That said, Cherry MX switches remain the standard-bearer in the segment, with most pro-gamers swearing by them.

In consumer keyboards, Cherry MX switches are often referenced by the color of the key stem. That makes it easier to discern the type and use-case. The company makes all three types of switches, including linear, tactile, and clicky. There’s a bewildering array of mechanical keyboard switches in the company’s portfolio, mostly named after the stem color. Here are the most common Cherry MX switches and we have even linked how most of them sound:

Most of these switches come in RGB variants as well, thus, making the total number of available options totally mind-boggling. Do note that the list is non-exhaustive, largely because of the sheer number and variants of products on offer, many of which cater to an extremely niche group of consumers. For more information on Cherry MX switches and how they differ from one another, check out the company’s official website.

Apart from the switches themselves, the main thing that distinguishes keyboards is their layout. While a typical full-size keyboard comes with function keys, a number pad, and an arrow cluster, various manufacturers also offer smaller keyboards with fewer keys for different purposes.

The smallest include a so-called 40% layout, where many of the keys serve dual-purposes. They typically need an additional key-press (like Shift or Ctrl) in most cases, making them relatively impractical for everyday use. There’s also a 60% keyboard offering that comes with a more regulation layout minus a dedicated arrow key cluster, home/ end/ page-up, and page-down or function keys. Finally, there’s a 75% layout that usually includes a distinct function row.

One of the most conventional small keyboard form-factors is TKL or ‘Ten Key-Less’ keyboard, which offers a standard keyboard layout but without the ten number keys on the right. TKL keyboard layout is a good choice for most gamers. There are also some non-standard variations, many of which are one-off or limited-edition designs from boutique manufacturers. There are many weird designs, including split keyboards, like the ErgoDox EZ featured below, all in the name of ergonomics. 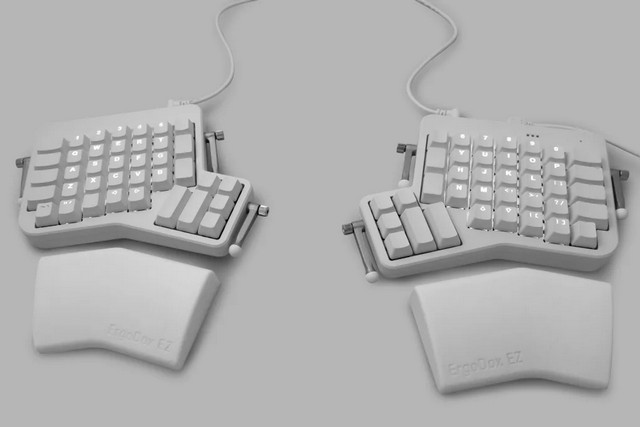 One of the biggest advantages of mechanical keyboards is that they are far more customizable than all other keyboard types. The keycaps in mechanical keyboards are often hot-swappable. That means users can swap out the default keycaps for a different set based on their taste and textural preference. When you buy a new set of keycaps to replace the default ones in your keyboard, the only thing to watch out for is compatibility. Once that part checks out, the sky is the limit in terms of design, materials (ABS and PBT keycaps), key profiles, and the legend marking method.

Further, PBT (Polybutylene Terephthalate) and ABS (Acrylonitrile Butadiene Styrene) are the two common materials used for making keycaps. While ABS plastic keycaps are cheap and most commonly used in today’s mechanical keyboards, PBT keycaps are higher-quality and are usually more expensive. Also, the reason why PBT is gaining recognition is that they are rigid and wear less over time as compared to ABS keycaps.

Does this mean you should buy PBT over ABS keycaps at all times? Not at all. ABS is still one of the most commonly used materials for manufacturing keycaps. German company GMK electronic design is one of the largest keycap makers. Their thick and durable ABS keycaps are worth every penny, and you can buy them without any second thought.

Key Factors to Consider When Buying Mechanical Keyboards for Gaming

The most important thing here is that tactile preference, which means you’ll have to decide whether you like a smooth, seamless feeling while using a keyboard or want to feel a bump with every keypress. While the latter offers more feedback and accuracy, the former brings more speed, which matters a lot for pro gamers. Meanwhile, clicky switches are loud and are good only if you work alone with no one around. Most people might feel disturbed at the constant clatter of clicky switches.

Your hand size and typing style will also play a part in deciding what type of switches you opt for. Since people with larger hands might have more misclicks, it is advisable for such folks to use switches with high activation points (longer keystroke to register each press) and heavy operating force. These two factors would make it a little harder to actuate a keystroke, thereby helping you avoid misclicks.

There’s More to Your Gaming Keyboard Than Meets the Eye

Mechanical keyboards offer an enhanced level of feedback and performance, which is not possible with any other type of keyboards available on the market today. While they are more expensive than standard keyboards, you do get the best available technology for just about any use-case, provided you know what you want. Thanks to our detailed guide, you now know about the core technology behind the most expensive mechanical keyboards for gaming and other purposes. So tell us, which type of mechanical keyboard do you use? What is your favorite kind of switch?

Now that you have gone through our detailed guide on mechanical keyboards for gaming, you should check out our list of the best budget SSDs for gaming and the best gaming RAM you can buy right now. Also, check out how you can speed up your Windows 10 PC to give you that added edge when playing your favorite games. Finally, make sure that your PC is not running too hot so that you can avoid thermal throttling and improve your hardware’s reliability and longevity.

12 Best Gaming Keyboards in India You Can Buy Right Now

10 Best Gaming Keyboards You Can Buy