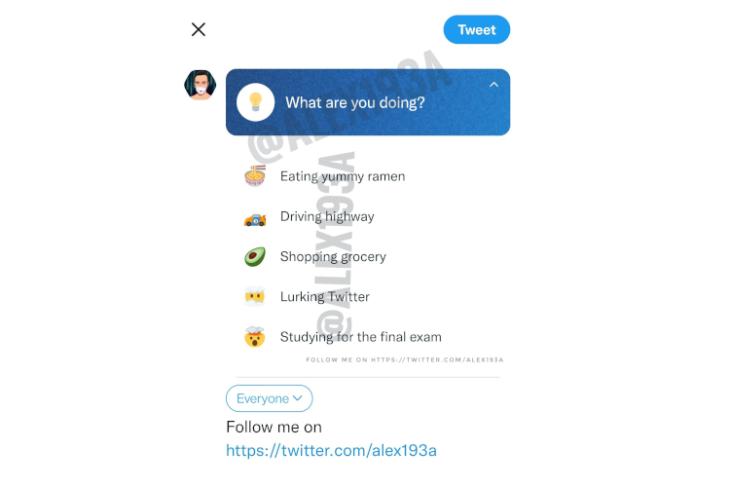 After its failed attempt to mimic Snapchat and Instagram Stories with Fleets, Twitter is now working on a new feature that will supposedly let you share status updates on the platform. Dubbed “Vibes”, Twitter is still working on this feature and it is not available to everyone for now.

As prolific app reverse engineer Alessandro Paluzzi shared on Twitter, ∫will offer a way for users to instantly update their status on the web and mobile apps. According to Paluzzi, you will have the option to add status from the tweet composer window, suggesting it could be a part of a new tweet. If that’s the case, it would resemble what we currently have on Facebook as the “Feeling/Activity” feature.

However, a separate tweet suggests that Vibes could also exist independent of a new tweet. Such an option would make it possible for users to update their statuses right from the profile page. That reminds me of the status feature that was present in the now-deprecated Threads app from Instagram.

Interestingly, it seems like you may also have the option to join or discover the status of others. This should, at least in theory, help you connect with users who are doing the same thing. Check out the interface of that option below:

That’s everything we know about the Twitter Vibes status feature at the moment. Since the feature is not even live by default on Twitter’s beta release channels, it’s safe to assume that it is at least a couple of months away from release. While we wait, do tell us if you would be interested in using this upcoming Twitter feature in the comments below.