Skip to content
Home News Check out This Cool Drone That Can Fly as Well as Swim Underwater! 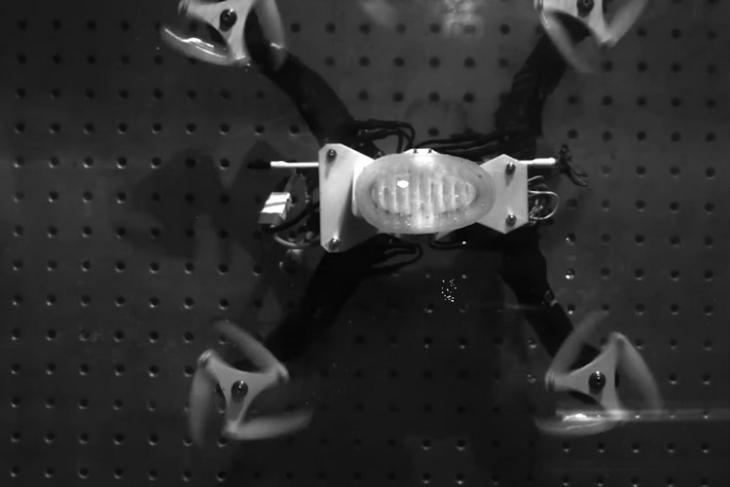 While there are numerous kinds of drones in the market, be it expensive ones like the Sony Airspeak S1 or Snap’s recently-unveiled casual Pixy Camera Drone, they all have the same capability of flying in the air. However, researchers have developed a one-of-a-kind drone that can fly and also swim underwater! Surprised? Check out the details below to know more about this interesting drone.

This Drone Can Fly As Well As Swim Underwater!

Researchers at China’s Beihang University recently developed a unique drone that can not only fly but also swim in shallow waters. There is also a specially-designed suction cup on it that enables it to attach itself to any object or living thing in the air as well as underwater.

“My original thought was ‘let’s find a point where we can beat nature.’ Let’s do a robot that can not only swim and stick underwater but also can fly into the air and stick in the air. I don’t think there are any animals that can do this.” said Li Wen, a Mechanical Engineer at the Beihang University and the lead researcher of the project.

Li and his team took inspiration from the kingfisher, which is an amphibious bird that can go underwater to catch its prey, to design the swimming capabilities of the drone. So, much like how a kingfisher folds its wings when diving into the water, the amphibious drone can quickly fold and unfold its rotor blades before making a dive. Furthermore, the speed of the rotating blades changes depending on the medium – higher for air and lower for water.

The 40cm-drone can go up to 2.2 meters underwater. If it goes deeper, the drone loses communication with its controller outside of the water. However, the researchers suggest that they could improve the communication range using acoustic waves. Nonetheless, with its current capabilities, the drone can fly in the air and submerge underwater multiple times in a single journey.

Now, coming to its suction capabilities, the researchers say that they took inspiration from the remora fish, also known as the suckerfish. These fishes, for those unaware, have a unique, natural suction-fin on their heads, using which they can attach themselves to bigger fishes to travel large distances underwater.

Taking inspiration from the remora fish, the researchers 3D printed an artificial replica of the remora fish’s suction pad. However, instead of using muscle contractions like the fish, this suction pad uses hydraulic pressure to create a similar suction to attach to almost any kind of surface, be it wet, dry, rough, or smooth.

The team attached the artificial suction pad at the top of the drone, which enables it to attach to different moving objects both in the air and in water to travel while preserving its power. During its testing in the labs, the researchers observed that the drone used only 5% of its total power when it was attached to a submersible robot for a short period underwater.

Now, coming to the availability of such a drone, it might take years before it reaches the commercial space. Li suggests that their current amphibious drone could be useful for research expeditions and wildlife surveys in remote environments. It can also be used to tag underwater fishes or birds in the air to track their positions for research purposes.

So, what do you think about this amphibious drone? Let us know your thoughts in the comments below.