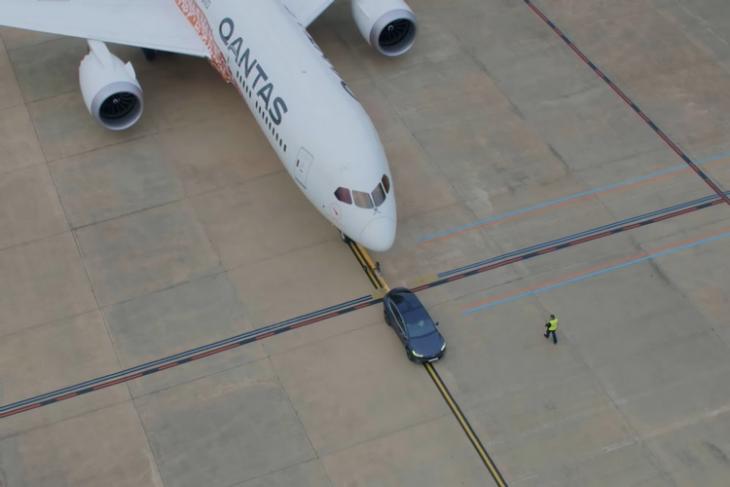 When it comes to generating brute power, electric cars are not the first vehicles that come to mind, as that area falls in the territory of gas guzzling horsepower monsters. Yet, Tesla has managed to quash that notion and accomplished something truly astounding by towing a passenger plane with a Model X electric vehicle.

And by a passenger plane, we don’t mean a small private jet, but the ginormous Boeing 787-9 Dreamliner which weighs 130 tonnes, well above the Model X’s road tow rated capacity of 2.5 tonnes.

In an attempt to set the Guinness world record for the heaviest tow by an electricity-powered passenger vehicle, the Model X was hitched to the huge airliner on a remote taxiway at the Melbourne Airport, and the Tesla EV delivered. The Model X managed to tow the Qantas-owned Boeing 787 airliner to a distance of around 300 metres.

The feat is quite impressive, but this was not just an attempt by Qantas to put the Tesla Model X’s engine to test, as the airline company wanted to show that ‘a small shift to electric power will have an enormous impact in the move to a sustainable future’. Qantas currently employs a large fleet of diesel-powered vehicles such as catering trucks and aircraft loaders, but is now looking to employ electric vehicles which are more eco-friendly and sufficiently powerful too.

“That’s why we’re continuing to collaborate with our friends at Tesla, driving innovation for our customers and increasing sustainability in the transport industry”, Qantas said in an official blog post. As part of its partnership with Tesla, Qantas will provide Model S and Model X owners charging facilities in Sydney, Melbourne, Brisbane and Adelaide, aside from offering the frequent flyers some perks in the month of June.