Skip to content
Home News Taco Bell and Microsoft Are Giving Away Xbox Series S in India; Here’s How to Participate! 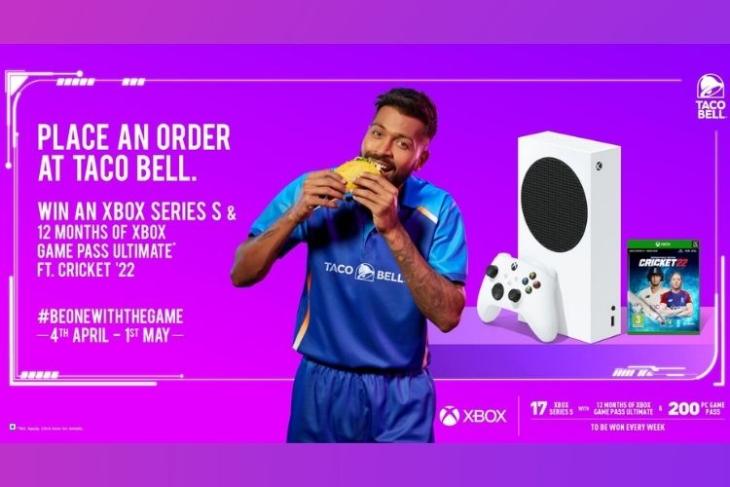 The popular multinational restaurant chain Taco Bell, in partnership with Microsoft, recently announced a new contest to giveaway Xbox Series S consoles and Microsoft PC Game Passes to lucky winners in India. Customers have to simply order food from Taco Bell to enter the contest and stand a chance to win an Xbox Series S each week, starting from today. Let’s take a look at the details below.

Taco Bell recently took to Twitter to announce the #BeOneWithTheGame campaign. The fast-food chain partnered with Microsoft for the contest and acquired the popular Indian cricketer Hardik Pandya for the marketing campaign. You can check out Taco Bell’s tweet, including a quirky video of Pandya taking on different gaming avatars, attached right below.

“We are delighted to have the opportunity to partner with Microsoft Xbox for a second year and give our customers the opportunity the win the best gaming console in the world,” Gaurav Burman, the Director of Taco Bell’s Master Franchise in India, said in a statement. “The combination of a meal from Taco Bell coupled with gaming on the Microsoft Xbox is a marriage made in heaven. We are fortunate to have Hardik Pandya who is already a legend as our ambassador to spread the message,” he further added.

To enter the contest, customers in India need to place an order via Taco Bell’s official website or app or any food aggregator platform by giving their mobile number. They can also visit their nearby Taco Bell outlets and place an order to get registered.

Once registered, the customers will stand a chance to win an Xbox Series S with 12 months of Game Pass Ultimate or a PC Game Pass featuring Cricket ’22. The company will give away 17 Xbox Series S consoles to winners each week. Other than that, 200 lucky winners will have a chance to win the PC Game Pass featuring the Cricket ’22 title each week. Customers can increase their chances of winning the rewards by placing orders on subsequent days each week.

The contest will be live from April 4, which is today, to May 1, and the winners will be announced by Taco Bell on its social platforms, app, and website on Thursdays each week. You can check out the official terms and conditions of the contest on the company’s website. So are you ready to win an Xbox Series S by ordering your favorite tacos?