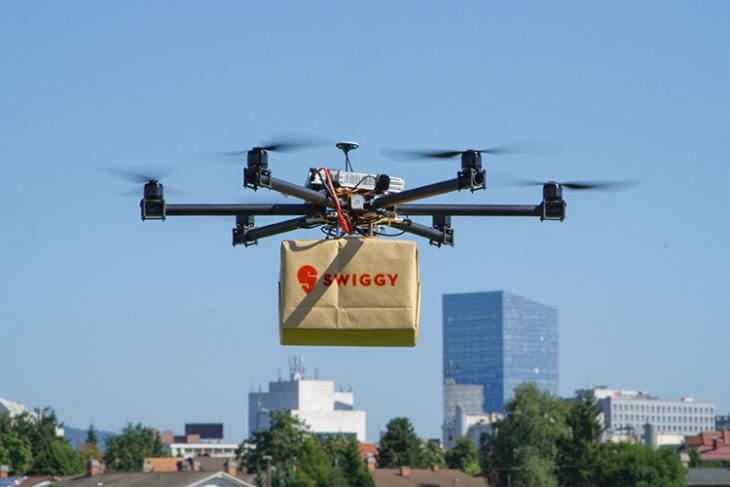 After getting the green signal from the Directorate General of Civil Aviation (DGCA) to test drone deliveries last year, Swiggy has announced to start testing drone deliveries in India. The food-delivery giant has partnered with Noida-based software company ANRA Technologies to commence the trials in the coming days.

According to recent reports, Swiggy and ANRA Technologies will collaborate to start delivering food packages via drones. ANRA has reportedly received the final clearances from various Indian authorities such as the DGCA and the Ministry of Civil Aviation to start Beyond Visual Line of Sight (BVLOS) drone deliveries in the country.

The team at ANRA launched its first sortie in India recently on June 16. It commenced after months of planning, assessments, and air traffic control integration. So, by leveraging ANRA’s advanced drone operation system, Swiggy aims to trial its first drone deliveries in India.

“With an increasing number of technological innovations taking place to smoothen and fasten the last mile journey, it only becomes natural for us to explore the latest avenues available to maximize the benefit to our consumers,” said Shilpa Gnaneshwar, the Principal Program Manager at Swiggy.

“We are excited about the potential that Drones offer and look forward to the trials on BVLOS operations for the use case of food delivery. Through our association with ANRA, we aim to put the long-range proficiencies of drone technology to best use and accomplish some ground-breaking trials,” Gnaneshwar further added.

As per reports, ANRA will start drone deliveries in Etah and Rupnagar districts using its proprietary SmartSkies technology. Other than partnering with Swiggy, ANRA has also partnered with the Indian Institute of Technologies, Ropar to commence drone deliveries of medical packages.