Swedish music streaming giant Spotify has started rolling out a feature that lets Spotify Premium users hide a particular song from a playlist. The feature is being added through a server-side update.

Unless you’ve put in efforts to curate your playlist with the songs you like the most, you’re probably depending on Spotify’s playlists or playlists created by other Spotify users. As music taste is always subjective, this might result in you having to skip tracks that you’re not really into. With this neat addition, you get a “Hide this song” option. Once enabled, Spotify automatically jumps to the next track on the playlist. 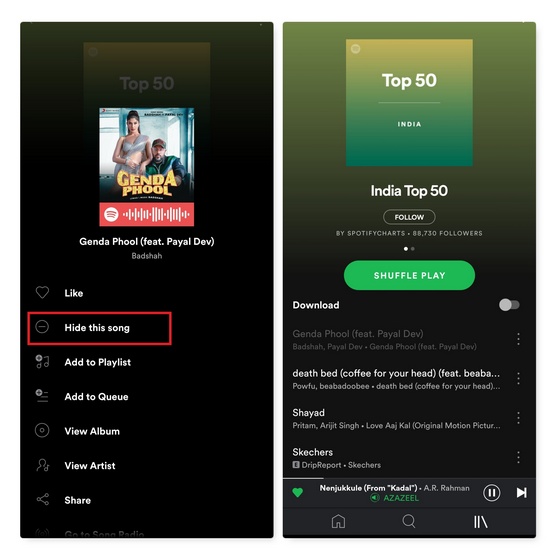 Once you hide a song, you’ll see a fade on the track that Spotify India users will certainly be familiar with, thanks to Spotify’s issues with labels. Spotify, however, signed a deal with Warner Music and Saregama earlier this month to bring missing songs.

If you’re interested to unhide a specific song from a playlist that you’ve hidden earlier, follow the same steps and tap on the “Hide this song” button again. The fade should disappear and the song will be available now.

According to the latest numbers from the market research from Counterpoint Research, Spotify retains the topmost position globally with almost 358 million Premium subscriptions in 2019. The company’s efforts to add convenient features like this could help attract new subscribers.

With all that said, do keep in mind that this feature is limited to Spotify Premium users and it is gradually being rolled out to users. If you’re a Spotify Premium subscriber, you should be getting the feature in the coming weeks.