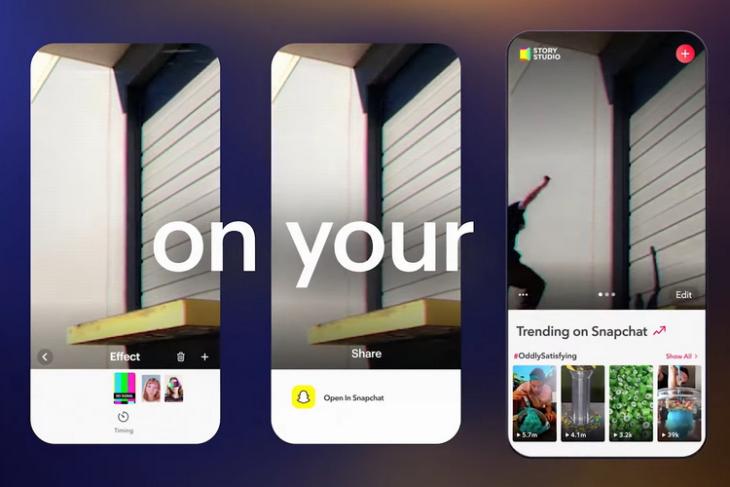 At Snap Partner Summit 2021, Snap has announced a new video editing app for iOS. Dubbed Story Studio, the app will offer a variety of editing features to improve the overall quality and aesthetic of your videos.

Snap’s Story Studio primarily focuses on vertical videos. While you have some editing tools on Snapchat, Story Studio aims to offer more versatile editing controls in the creation process and wants to become the one-stop destination when it comes to mobile video editing.

According to Snapchat, the app will feature what’s trending across Snapchat’s #Topics, Sounds, and Lenses to help inspire creativity. Some of the features included in the app are trimming, slicing and cutting, adding captions or stickers, adding songs from the Snap Sounds catalog, and Snapchat Lens.

Introducing Story Studio! An easy-to-use app that gives creators the tools to make awesome videos on their phone that could then be shared anywhere. #SnapPartnerSummithttps://t.co/OWwwCybQ1Q pic.twitter.com/FG8gwY115K

Creators can easily share videos edited on Story Studio to Snapchat as a Story or Spotlight – Snapchat’s TikTok clone. You will also have the option to download edited videos to your camera roll if you would like to share them on other Snapchat alternative apps. It is worth pointing out that videos edited through Story Studio will not have a watermark.

Snap will launch Story Studio as an iOS app later this year. The app will be free for everyone. The company didn’t reveal if an Android version is on the way too. If you want to be among the first ones to try out Story Studio, you can sign up for the Story Studio beta program. Until then, you can pick one of the best video editing apps for iOS or a video editing app for Android from our linked articles.