Skip to content
Home What is Single Channel vs Dual Channel Memory: Which Is Better For You?

If you’re building or upgrading your system, your system’s RAM must be one of the most important things on your mind. Most people have the opinion that the RAM helps the processor work faster. But unlike public opinion, Random Access Memory, or RAM, basically throttles the system from achieving its maximum potential performance. This is because the processor is always going to be faster than the RAM, which results in the processor having to wait for the RAM to deliver the data. During this wait time, the CPU sits idle, thus wasting power and time.

Recent advances in technology have tried to overcome the speed barrier by moving on to dual, triple and even quad-channel techniques to increase the speed, with the most common being dual channel. But how much of an increase does it really bring about? Today, we will be comparing the Single Channel vs Dual Channel Memory modules, to see whether the hype surrounding Dual Channel is real or not, and is the upgrade even worth it? But before we get to that, let us first see how memory in a system actually works.

The RAM in the system is controlled by a circuit that is referred to as Memory Controller. The RAM and the Memory Controller are connected through a series of wires, collectively known as a Memory Bus. Now, these wires are further divided into three groups – Control, Data, and Address. The Control wires are responsible for sending the commands to the memory modules, which contain information about what kind of operation is being performed by the system. The Data wires will carry the data that is either being read from the memory to the memory controller or being written from the memory controller to the memory.

The Memory Controller is also responsible for defining the memory speeds (or clock rates) for the said memory module. For example, if the Memory Controller states that the max clock rate it supports is 1333 MHz, even if you install a 2400 MHz memory module, the system will be able to utilize the potential of just 1333 Mhz only, thus underclocking the RAM. Now that you’ve understood how basically a RAM functions, let’s move on to compare Single Channel vs Dual Channel Memory.

A single stick of RAM operates on a single 64-bit data channel, which means that it can push data down to a single pipe that is 64-bits in total width. The architecture for a Single Channel Memory is shown below.

That being said, nowadays, modern systems support multi-channel platforms as well. In the case of Dual Channel Memory, the system makes use of not one but two memory channels. Now, we have got 2×64-bit channels available to the memory. This means we’ve doubled the data traces running on the memory bus, and now have an effective 128-bit channel.

If you take a closer look at the image above, you’ll see that both the channels support data bit ports from D00 to D63, that is, 64 ports. That being said, effectively, the ports on the channel 2 are taken from D64 to D127, thus emulating the next set of 64 ports. As a result, the system regards the channel width to be a total of 128-bit width rather than 64-bit.

As you can see above, the D0-D63 represent the first channel, D64-D127 represent the second channel. Thus, modules can process 64 bits of data at any given time, and so dual-channel platforms will read and write to two modules simultaneously (saturating the 128-bit wide bus).

Bandwidth is the maximum theoretical transfer rate of a communications channel and is measured in megabytes per second (MB/s) or gigabytes per second (GB/s). Current technologies such as DDR (Double Data Rate) can transfer two data bits per clock cycle. As a result, they achieve double the transfer rate compared to traditional memory technologies. For example, the DDR3-1333 MHz module may actually be working at 666.6 MHz, but transferring two data bits per clock cycle. Furthermore, bandwidth also depends upon the width of the data bus. A single channel makes use of a 64-bit device width, which basically means that 64 bits of data are transferred at each transfer cycle. Thus, theoretically, bandwidth can be calculated as:

So, for a single channel DDR3-1333 Memory, the theoretical bandwidth comes out to be

Newer technologies such as dual channel technologies focus on doubling the data bus width by increasing the number of data wires available in the memory bus. A dual channel makes use of 128-bit device width, ie, 128 bits of data are transferred at each transfer cycle (as shown in the architectural differences above). This, in turn, impacts the system by theoretically doubling the bandwidth. For example, for a dual channel DDR3-1333 Memory, the theoretical bandwidth on calculation comes out to be

Note: While the difference between the bandwidths is staggering, do keep in mind that this is just a theoretical calculation of the two values. Actual performance between Single Channel vs Dual Channel memory may differ, which is discussed further.

Interleaved memory is a design made to compensate for the relatively slow speed of Dynamic Random-Access Memory (DRAM) or core memory. This is done by spreading the memory addresses evenly across memory banks. The memory bank consists of multiple columns and rows of storage units spread across several chips. Each memory module can have two or more memory banks for program and data storage.

Interleaved memory results in contiguous read and writes. This actually uses each memory bank in turn, instead of using the same one repeatedly. Eventually, it results in significantly higher memory throughput as each bank has a minimum waiting time between reads and writes.

Using a Dual Channel Memory increases the number of memory banks, thus, in turn, improving the interleaving design to result in better multitasking.

Upon our tests with MaxxMem, we tested the memory copy, memory read, memory write, and memory bandwidth performances. These tests are measured in Megabytes per second. As such, we saw significant performance differences between the Single Channel vs Dual Channel Memory modules, with the Dual Channel having a clear lead in each case. That being said, it is worthy to point out that the performance is no way near to the theoretical calculation, considering the bandwidth should have been doubled when instead we observed a ~20% boost on average.

Latency refers to the delay before a transfer of data begins following an instruction for its transfer. In our memory latency test on MaxxMem, we found that there was a mere ~2.7% difference in the latencies, with the Dual Channel memory module still performing slightly better than the Single Channel.

On our Handbrake Benchmarking, we saw almost a 4.5% advantage in favor of Dual Channel Memory. That being said, Handbrake in itself is a really powerful tool, that pushes the system to its limits. Even for most heavy-duty users who do video ripping or transcoding, the slight difference wouldn’t make much of a difference. 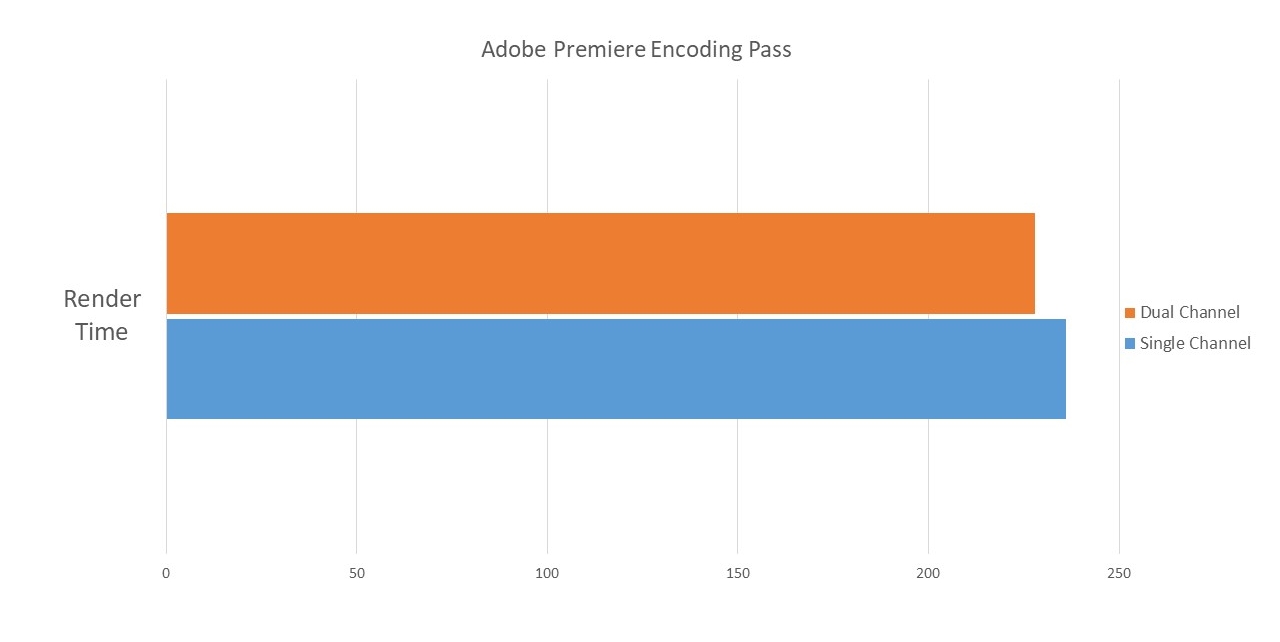 For video editing, Adobe Premiere is one of the most demanding software out there. In our benchmarking test, we found that the Dual Channel setup saves approximately 8 seconds in overall rendering time, thus giving it the slight edge. While the difference here is quite insignificant, for systems that render all day long, the rendering time gap could prove to be bigger, thus saving a few crucial minutes off the shelf.

While the above benchmarks proved to be in slight favor of the Dual Channel Memory module, in my real life usage, I found there to be a negligible difference between the two. Pages loaded slightly faster and my software such as iTunes, Google Chrome, and Microsoft Office ran at equivalent speeds. And yes, I made sure to clear the cache before testing each Memory setup to ensure precise results.

Additionally, I also ran some games to test their performances. The results are shown in the graph below.

We tested the Dying Light, Metro Last Light, Grand Theft Auto V, and The Witcher 3: Wild Hunt on our system when paired up with the MSI NVIDIA GTX 1060. The results were more or less the same, with the Dual Channel having a slight advantage over the Single Channel memory modules. That being said, there were cases where the Dual Channel mode experienced performance drops, which was quite evident in the Witcher 3. Even so, the difference between the two is still negligible whatsoever.

Single Channel vs Dual Channel Memory: Which One Is Better?

To summarize, I’d say that yes, in the comparison of Single Channel vs Dual Channel Memory, Dual Channel does come out as the winner. That being said, the benchmark and real life results are way different from the differences that were calculated on paper. Theoretically, there should have been a 2x difference, while in reality, the Dual Channel seems to exhibit only a 16-17% advantage at best in overall usage. While attaining a difference of 12-13% is also desirable, it is certainly not worth the hype that surrounds Dual Channel Memory. In most cases, the normal user would not even notice the difference between the two. And as far as power users are concerned, even though Dual Channel does come out on top, they would not be sacrificing anything significant.

SEE ALSO: DDR3 vs DDR4 RAM: Is It Worth The Upgrade?

Single Channel vs Dual Channel Memory: What’s Better For You?

As you can see, while the Dual Channel Memory does perform better than the Single Channel Memory modules, the difference between the two is in no way staggering. In the end, it all comes down to the price point. There may exist cases where you might be able to purchase a Dual Channel kit cheaper than the Single Memory module, or vice versa. That being said, purchasing a Single Channel Memory does leave the door open for future Dual Channel Utilizing. The only thing that you have to keep in mind is the fact that your future purchase should be similar, if not identical, to the already existing memory in order to ensure proper functioning.

Finally, your primary focus should be on the RAM capacity and the clock speeds. In the real world usage, these two factors are gonna make the most difference, regardless of whether being used in Single Channel or Dual Channel. Our suggestion would be to finalize on the capacity and the clock speed of your RAM and then simply watch the market for a better deal on either Single or Dual Channel to finalize your purchase.

So that’s all there is to Single Channel vs Dual Channel Memory from our side. Make sure to share with us your thoughts on this, as well as your experiences, in the comments section below.