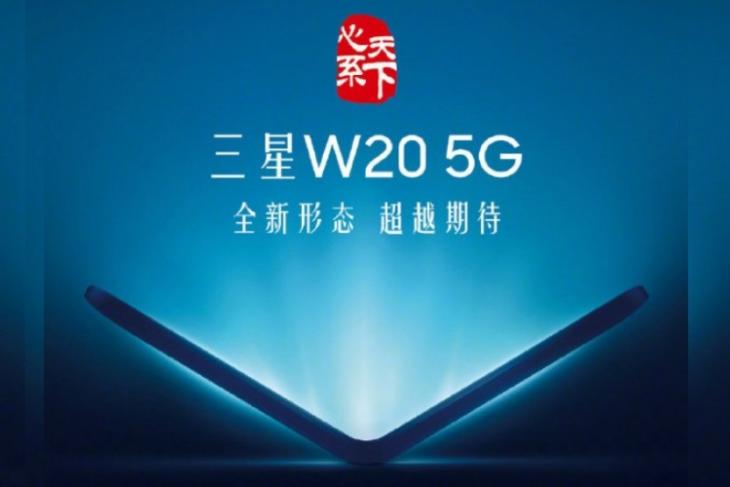 Samsung Galaxy Fold had to jump through a few hoops before it could reach the public, but the Korean giant remains committed to foldables. It has already shown off its latest foldable phone concept, which resembles a flip phone (a blast from the past) earlier this week. Well, it won’t remain a concept for long as the Samsung W20 5G has today been confirmed to launch in China sometime in November.

Samsung W20 5G has been rumored to be the company’s second foldable phone since a poster for this device was first spotted at a Chinese expo back in September. It will be a successor to the W2019, the latest phone in the company’s long-running “W” flip phone (clamshell) series. It boasts 2 touchscreens – one display on the outside and one inside, coupled with a physical keypad.

China Telecom has, however, taken to Weibo to tease the Samsung W20 5G foldable and reveal that it will launch sometime this month, i.e. November. Yes, the Korean giant may have stated that their flip phone concept is in the works and may not come right away. I beg to differ as the Samsung W20 5G launch seems to be right around the corner and it will take on the Motorola Razr foldable phone, which leaked in detail earlier today.

Now, I have already mentioned it many times, but W20 5G will swap the older clamshell design, which sports physical keys and is pretty chunky, with a foldable display panel on the inside. The teaser poster confirms this theory, but we are not sure whether Samsung has added a secondary touchscreen, like the Galaxy Fold, on the outside as well.

Though we do not have a concrete launch date, it’s certainly exciting to see the foldable phones segment progress at a breakneck pace. Samsung W20 5G could give Motorola’s Razr foldable some competition if it can break free from the Chinese presence – the sole location where W-series has been sold in the past.