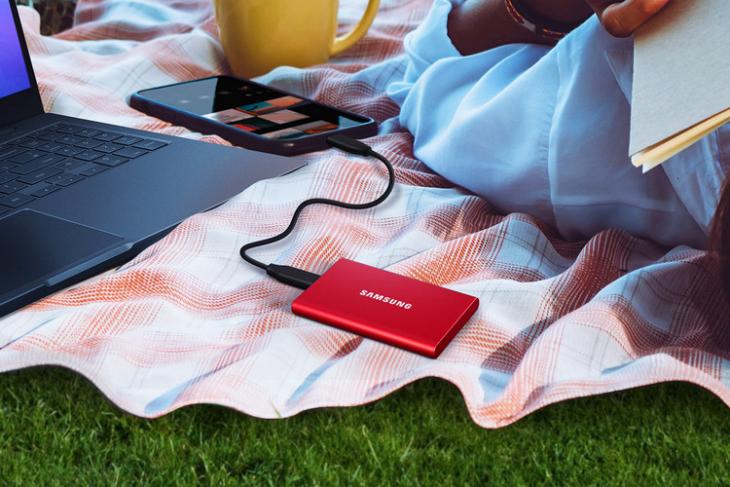 Samsung Electronics has launched its latest range of storage devices in India. The lineup includes the Portable SSD T7 and the 870 QVO internal SSD. While the former is a fast and compact external storage device, the latter is described by the company as the world’s largest client Solid-State Drive (SSD) to offer capacities of up to 8TB. Both the lineups come with a 3-year warranty.

The SSD T7 can reach maximum read and write speed of 1,050MB/s and 1,000MB/s, respectively. That’s nearly twice as fast as its predecessor, the Portable SSD T5. It is compatible with PCs, tablets, smartphones and gaming consoles.

Samsung’s Portable SSD T7 comes in three storage capacities – 500GB, 1TB and 2TB. These are priced at Rs. 9,999, Rs. 17,999 and Rs. 29,999, respectively. They will be available for purchase in Metallic Red, Indigo Blue and Titan Gray color options. It is already available for purchase across leading online and offline channels across the country.

The 870 QVO internal SSD has sequential read and write speeds of up to 560 MB/s and 530 MB/s, respectively. It also comes with TurboWrite technology that allows it to maintain peak performance levels using a large variable SLC buffer. The SSD also offers 13% improved random read speed compared to its predecessor, the 860 QVO.

The 870 QVO is equipped with 9x layer V-NAND characteristics and a refined new controller with an advanced ECC algorithm. It offers high endurance and durability, and get a warranty of up to 2,880TB written (TBW) or a three-year limited warranty.