If you love the concept of Samsung Galaxy S6 Edge, particularly its Edge display and associated features, and want to have an enlarged version of the phablet Smartphone, chances are high that you would love Samsung Galaxy S6 Edge Plus, which was announced back on 13th August, during the launch of Samsung Galaxy Note 5. Being a successor of a quite-popular device, Galaxy S Edge Plus has a lot more to offer, especially for those who need a smarter experience out of their Smartphone! Specifications of the device are way too impressive, as it uses an Octa-core 64-bit SoC that is named Samsung Exynos 7 Octa 7420.

Also, when we count the 4 GB DDR4 RAM and on-board storage of 32 or 64 GB, Samsung Galaxy S6 Edge Plus brings Christmas, quite literally. With some other stunning features like its support for NFC, fingerprint reader and powerful GPU, you would love the phone and it has a 3000mAh battery to power all the stuff. Nevertheless, when you’re concerned about safety of the device, you’d be thinking a bit more about the Edge display too. So, when you need a complete level protection for your Samsung S6 Edge Plus, you should make sure it’s covering the edges as well.

In this post, we shall have a list of 10 cool Samsung Galaxy S6 Edge Plus protective cases. We have been a bit more careful while choosing the cases as to give you state-of-the-art protection without tampering the style of it. 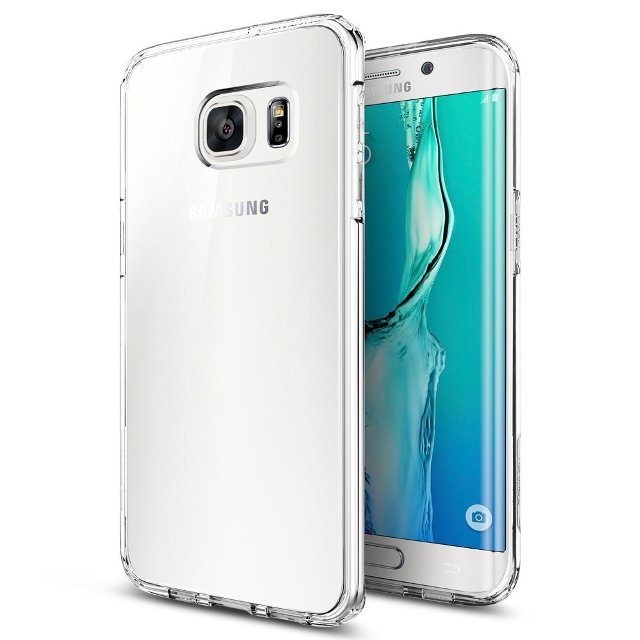 Coming from the Ultra Hybrid series of Spigen, Spigen Crystal Clear Galaxy S6 Edge Plus Case is a good addition to S6 Edge Plus of yours. What makes the protective case so awesome is that you don’t have to compromise style of your phone, as it comes with clear back panel, not to obstruct the design. Despite the transparency, the protective case is using Hard Polycarbonate on the outer layer and there’s a TPU Bumper as well. Spigen has added some other superb features as well, such as the raised bezels for keeping the phone safe in flat surfaces, embossed buttons which make them easier to be pressed etc. After all, it’s an exclusively-made protective case and it makes sense, you know. 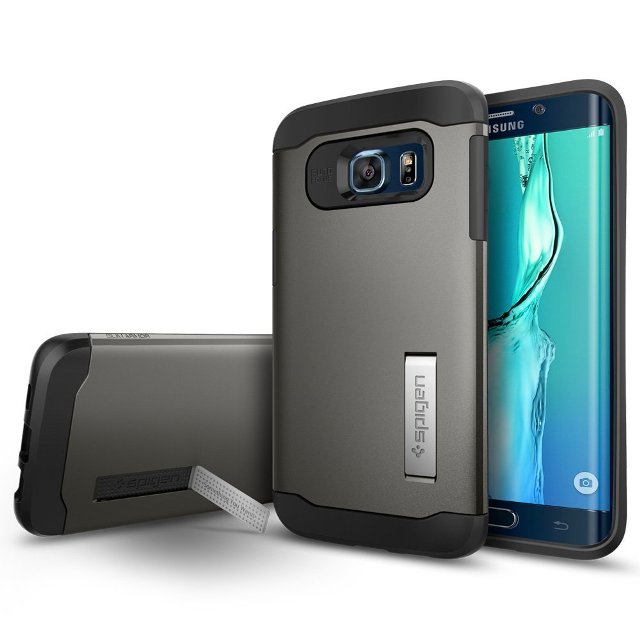 Spigen Slim Armor Galaxy S6 Edge Plus Case would be a good choice when you don’t mind the phone becoming a bit more bulkier, given that almost every aspect of it is protected in the best possible manner. Apart from sterner build of the case, there’s Air Cushion Technology that protects the device from normal drops and falls. Talking of material that is used for production, there’s a blend of Hard Polycarbonate and Tetra Polyurethane, arranged in an optimal & effective manner to get the best protection. Also, there’s an integrated kickstand, thus increasing usability of phone when you want to watch movies or so. And, when we add the 1.25 mm raised lips into account, Spigen Slim Armor Galaxy S6 Edge Plus Case becomes a good choice. 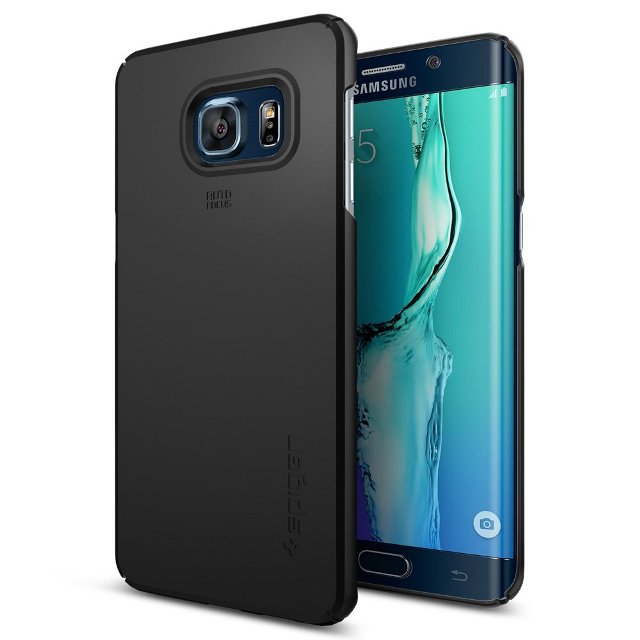 One of the most affordable protective cases in the list, Spigen Thin Fit Galaxy S6 Edge Plus Case brings a sexy layer of black to your S6 Edge Plus, while offering top-notch protection from commonly-faced issues such as dust and drops! In spite of being thin fit in terms of design, Spigen Thin Fit Galaxy S6 Edge Plus Case offers all-round protection and it has made use of premium polycarbonate to create the shell. The back side of the case is made using matte, which is capable of giving you more grip in the long run. Along with all these features, the case has been made exclusively for S6 Edge Plus and has all the cut-outs. Enough camera coverage of the case is also worth noting. 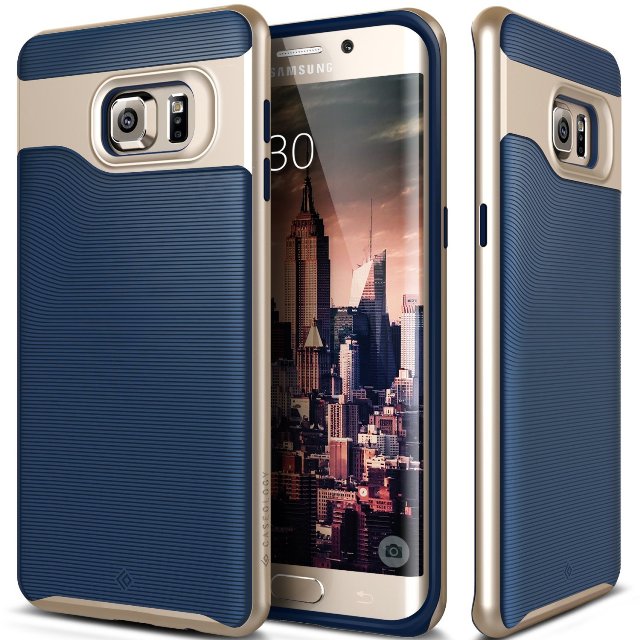 Yet to be on stock, Caseology Wavelength Series Galaxy S6 Edge Plus Case is a protective case that is made using TPU that is resistant towards oil, dirt, scratches and other possible damages your device has to face. A product from one of the best manufacturers in South Korea, the case offers ultimate grip when you handle it along with some features that are way too productive. For instance, there’s screen protection through raised lip, lifted camera bezel and cover given for buttons doesn’t affect the usability. Also, you can count the unobstructed access to fingerprint sensor as a good point, we suppose. Despite the addition of style, Caseology Wavelength Series Galaxy S6 Edge Plus Case is truly an addition to the stern build of the phone, to be noted. 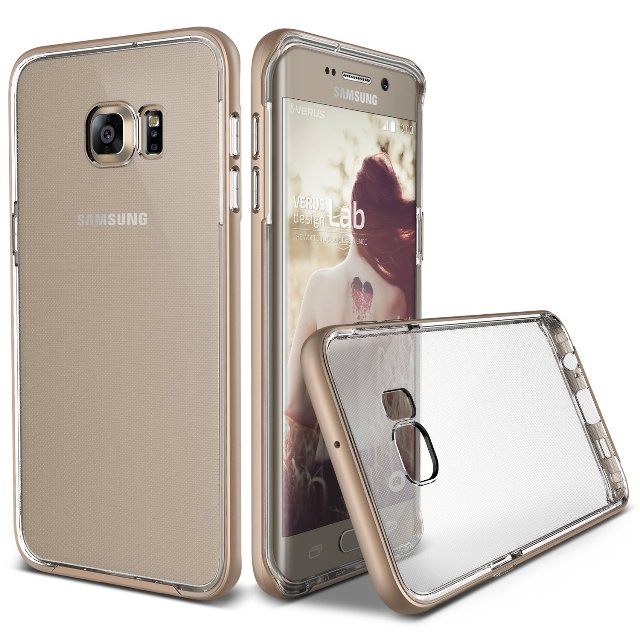 This Samsung Galaxy S6 Edge Plus protective case from Verus does not affect the style of your S6 Edge Plus, as it has a transparent back protection layer. In terms of material used, the protective layer has transparent TPU and the lay-on-the-table design is a good feature for those who need advanced protection. It has to be noted that the inner TPU is a flexible layer and it can be adjusted to suit your convenience and requirement. When we consider the design of the device, we have to mention the soft rubbery layer that protects your S6 Edge Plus from relatively smaller drops. In short, we would say that Verus Clear Slim Fit Galaxy S6 Edge Plus Case is a protective deal that does not want you to compromise the style of device. 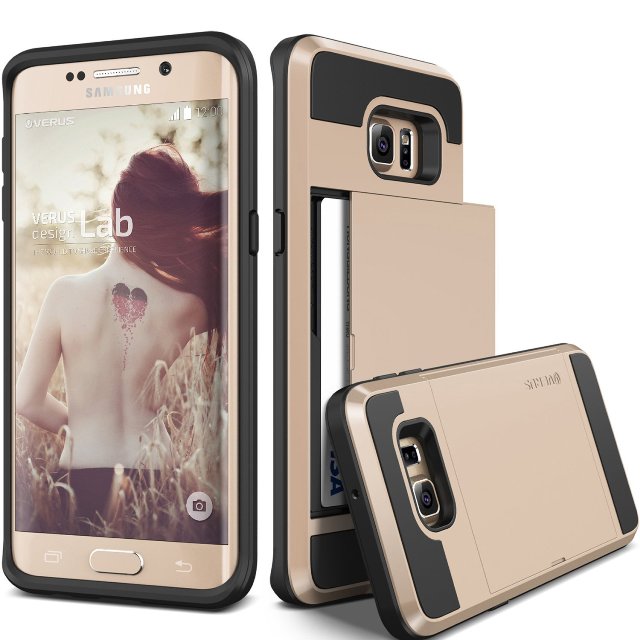 When you not only need protection for your Samsung Galaxy S6 Edge Plus but also an addition to productivity, you’d love to have Verus Damda Slide Galaxy S6 Edge Plus Case, which integrates space for storing cards as well. As it does come with an intuitive design, managing your cards is an easy task, and you can store up to two credit cards in space given. Coming to the case of protective layer, the dual layer system depends upon both TPU and polycarbonate and it has a soft rubbery layer, to protect device from shocks in case of serious collisions or drops whatsoever. Available in various colours, Verus Damda Slide Galaxy S6 Edge Plus Case is classy too. 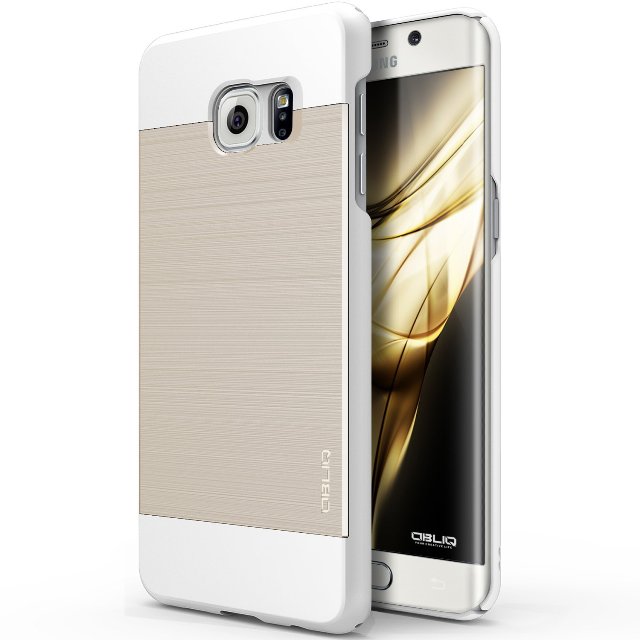 With a superb kind of look in Champagne and white design, OBLIQ Slim Meta Galaxy S6 Edge Plus Case is a good-to-go protective case you can find for your S6 Edge Plus. The metallic back panel and the whole build is an addition to the elegance of the device when the shock-resistant case is worn around. As in case of the inner layer, the interior fabric is a perfect-fit scenario for the device and superior drop protection offered by OBLIQ is just up to the mark. In spite of the 1.5mm raised lips for display protection and all, OBLIQ Slim Meta Galaxy S6 Edge Plus Case is still thinner when compared to other protective cases out there in market. Considering the price, it’s a steal deal. 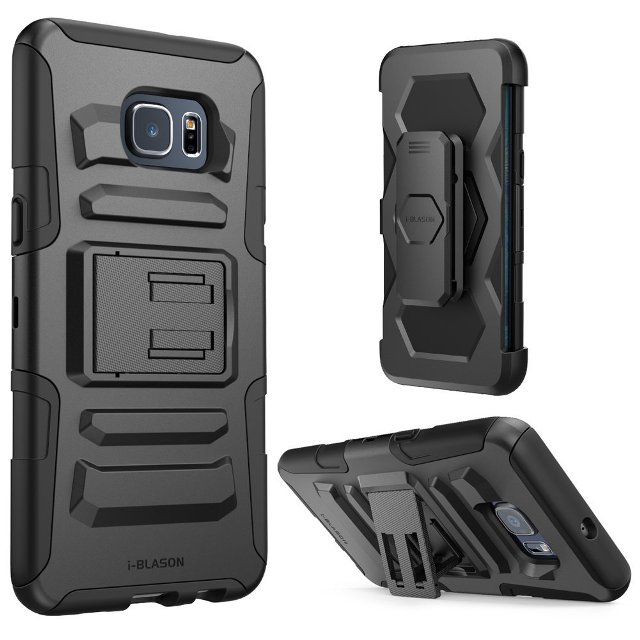 If ruggedness of the protective case isn’t a problem for you, you should have a look at i-Blason Prime Series Galaxy S6 Edge Plus Case, which consists of a dual-layer protection as well as belt clip holster, for better comfort. From the protection point of view, the dual layer — which is made using impact-resistant polycarbonate and the silicone-made shock absorption inner-sleeve — is an awesome thing and the package also contains a belt clip swivel holster, which you can use in certain situations. Also, it comes with an in-built kickstand, letting you have the best possible viewing experience in the long run. Of course, there are advantages of being exclusively made, such as the perfect cut-outs for connecting accessories, buttons and everything else you need. 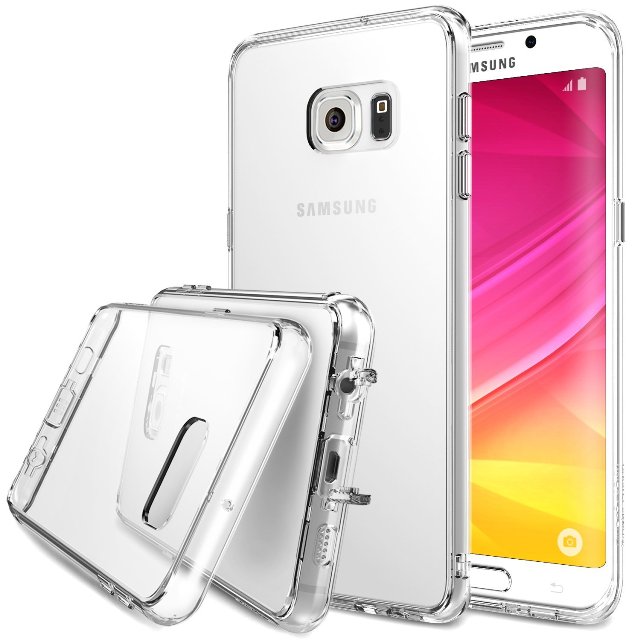 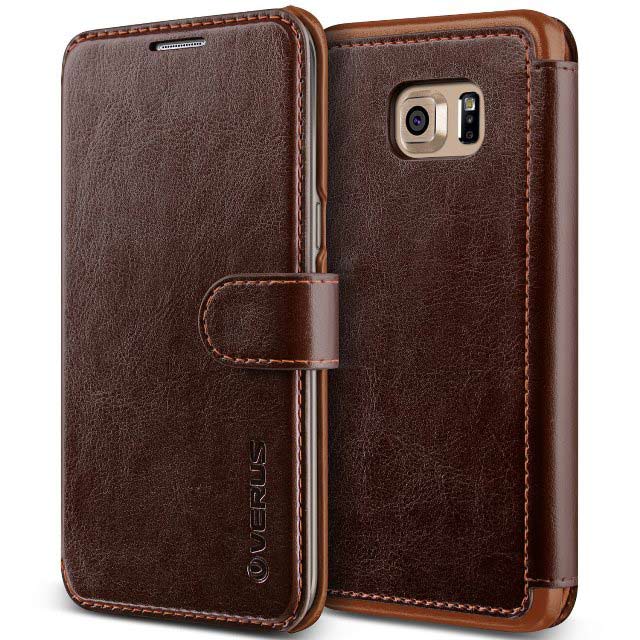 When you’re ready to pay a bit more for having an additional wallet and flip cover, Verus Flip Wallet Galaxy S6 Edge Plus Case may make sense to you. As you can guess, the protection offered is all-round, though they’ve kept things such as raised lips intact. When it comes to the case of wallet, you can use it to store up to three cards and money at the same time, without adding much bulk, for that matter. The material used for production of the wallet case is PU leather and the magnetic clip of the cover adds more productivity in the long run. On top of all, it gives you access to all the ports, slots and the speaker.

Don’t you use any protective case for your Samsung Galaxy S6 Edge Plus? Is it one of those in list? Do let us know via comments.