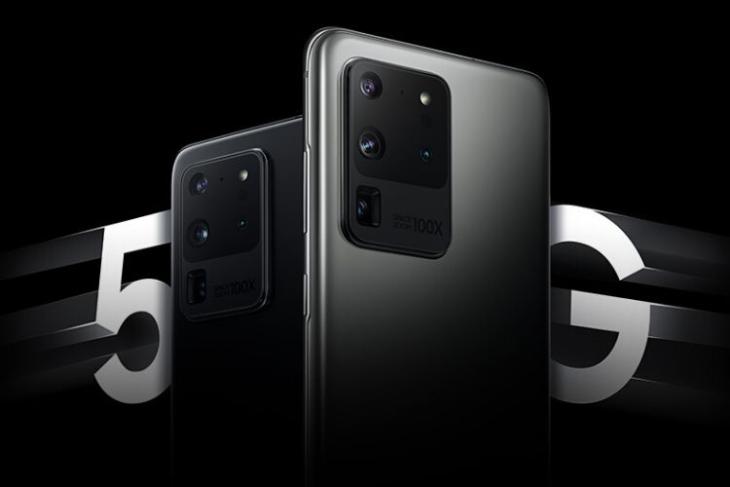 Putting an end to the incessant stream of leaks, rumors, and well, even official teasers, Samsung has finally taken the wraps off its flagship Galaxy S20 lineup. The company is launching 3 phones this time around as well but there’s a simple yet significant change. Samsung has taken a page from Apple’s book and simplified its lineup by launching the Galaxy S20 (successor to Galaxy S10e), Galaxy S20 Plus, and a higher-end Galaxy S20 Ultra (first time we are seeing an Ultra variant) at its Galaxy Unpacked 2020 event in San Francisco.

If you are wandering the Internet for deets on all of the three Galaxy S20 variants, then you have come to the right place. Here’s everything you need to know about the Galaxy S20, Galaxy S20 Plus, and Galaxy S20 Ultra:

Let’s start off with the design, The Galaxy S20 looks like any other Samsung smartphone that made its debut over the past six-odd months. The Korean giant is pushing out exact same design, with a centered punch-hole camera and a rectangular camera bump, across most of its devices. 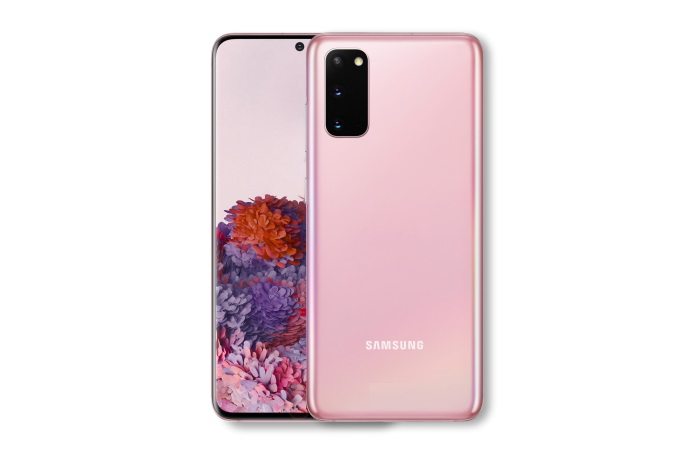 On the front, Galaxy S20 includes a tall 6.2-inch QHD+ Infinity-O Super AMOLED display with a 20:9 aspect ratio, 1440 x 3200-pixel resolution, and most importantly, a 120Hz refresh rate. Yeah, Samsung has finally baked a higher refresh rate display in its flagship and it’s amazing but the caveat here is that the display resolution is capped at Full-HD+ at 120Hz instead of Quad-HD+ (60Hz). The display also includes HDR10+ support and Gorilla Glass 6 protection on top.

Powering the Galaxy S20 is the latest Snapdragon 865 chipset from Qualcomm, but you can expect the device to be backed by the company’s in-house Exynos 990 chipset as well in some global markets including India. This means it will support 5G connectivity but there’s a 4G-only variant of the S20 as well. It’s coupled with 8GB of RAM and 128GB of internal storage. The device runs OneUI 2.0 based on Android 10 and you can check out some of its best features right here. 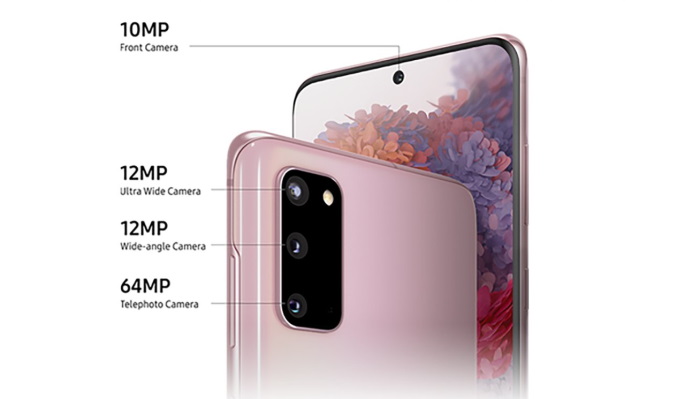 In the camera department, the Galaxy S20 features a triple camera system with a 12MP primary camera, a 64MP telephoto camera with 3x optical zoom and 30x digital zoom capabilities, and a 12MP ultra-wide-angle camera. There’s also a 10MP (f/2.4) selfie camera housed in the punch-hole at the top.

You will also get dual-OIS support, Super Steady mode, 8K video recording (with 33MP stills while recording), and other software features like Single Take, where the phone captures almost every type of photo/video option available in the camera app (boomerang, ultra-wide, portrait video, and more). You can then pick the photo or video that suits your fancy.

Galaxy S20 comes equipped with a 4,000mAh battery pack with 45W fast-charging, 15W wireless charging, and 9W reverse wireless charging support. You, however, will be getting a 25W fast charger in the box. There’s a USB Type-C port on board for charging, IP68 dust/water resistance, and no 3.5mm headphone jack. 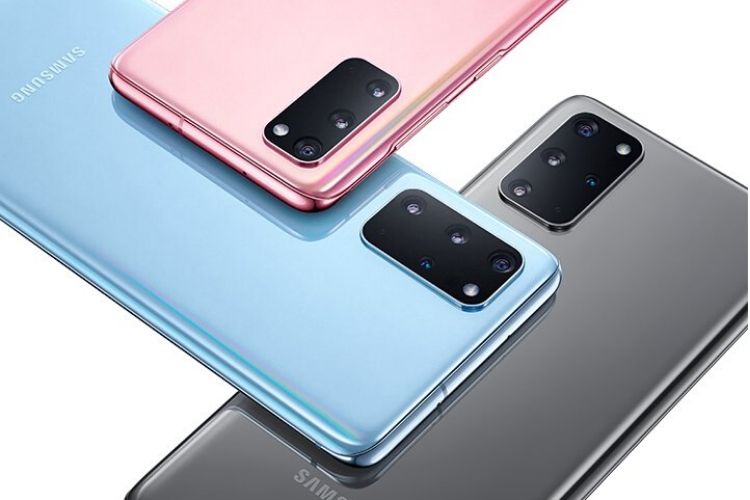 Moving on to the Galaxy S20 Plus, it isn’t a whole lot different from the standard S20. It brings along a large 6.7-inch AMOLED display with the same specifications and a high refresh rate. The internals, including the chipset, RAM, and memory options, remain the same as well.

Galaxy S20 Plus features only minor upgrades on the camera and battery front. Galaxy S20’s triple camera setup is accompanied by a Time-of-Flight (ToF) sensor for improved depth data mapping, better portraits, and more. The selfie camera and all of the camera features remain exactly the same. The battery has been bumped up to 4,5000mAh to most likely compensate for this bigger display with a higher refresh rate.

This variant will be available in three colors namely Cosmic Black, Cosmic Grey, and the attractive – Cloud Blue. 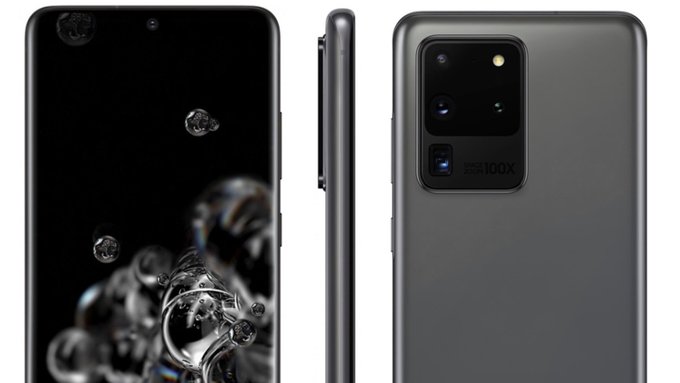 Finally, we have the show-stealer of the Galaxy Unpacked event. Galaxy S20 Ultra is an amazing attempt on Samsung’s part to fill the void left by Huawei’s absence (and it not being able to offer GMS on its device) in some key global markets. Samsung has surely perked up its camera efforts with this high-end flagship phone, which boasts a different camera setup than the other two Galaxy 20 devices.

First off, Galaxy S20 Ultra sports a slightly bigger 6.9-inch Super AMOLED display with the same specs, resolution and high refresh rate. You can’t miss out on the 120Hz refresh rate on your most premium flagship variant. The internal specifications remain exactly the same but you get up to 16GB RAM and 512GB storage options. 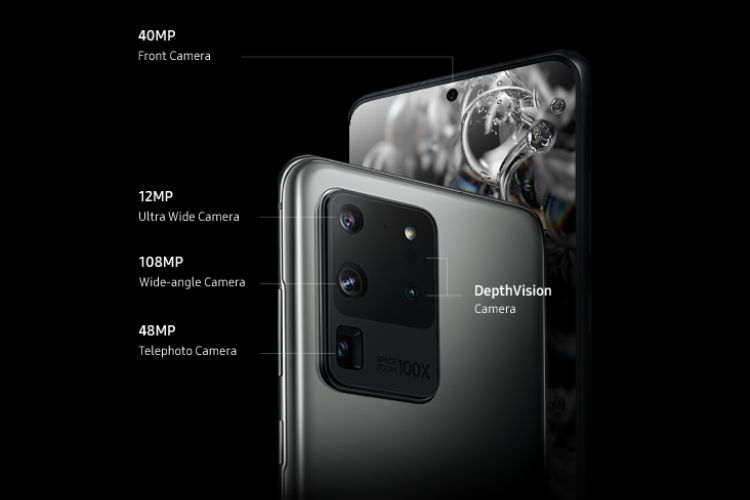 Coming to the rear cameras, Galaxy S20 Ultra stands out from the lot because of an even larger rectangular camera bump. Even the camera placement is different and you have a periscope-cum-telephoto camera onboard that helps distinguish it from other Galaxy S20 variants. Also, it’s amazing to see Samsung adopt its own higher-megapixel sensors in its own flagship phones.

The Galaxy S20 Ultra includes a quad-camera system on the rear with a 108MP primary camera, which is coupled with a 12MP ultra-wide-angle camera, a 48MP telephoto camera with 10x optical zoom and 100x digital zoom (which Samsung is marketing as 100x Space Zoom), and finally a Time-of-Flight (ToF) sensor. The selfie camera also picks up a major upgrade here. Galaxy S20 Ultra packs a 40mP selfie camera in the punch-hole cut-out at the center.

Also, Samsung is pretty generous with battery packs with its latest flagships. The Galaxy S20 Ultra includes an even bigger 5,000mAh battery as compared to the other variants. Galaxy S20 Ultra will be available in two color variants, namely Cosmic Grey and Cosmic Black.

The devices will be up for pre-order from February 21 next week and go on sale from March 6. So, are you excited to check out the new Galaxy S20 flagship phones? Do let us know your thoughts in the comments below.