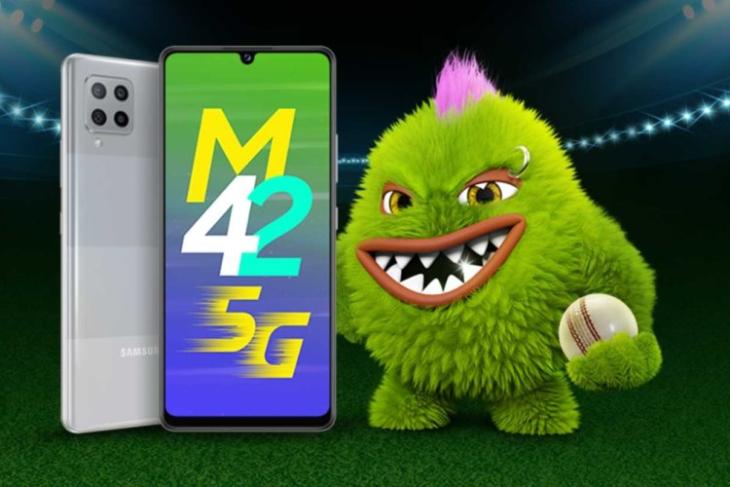 With an onslaught of 5G smartphones from Chinese giants, Samsung is also looking to step up its game in the budget segment. The Korean giant has confirmed that its first 5G-enabled M-series smartphone, the Galaxy M42 5G, will be unveiled on 28th April in India.

While Samsung is yet to officially tweet the Galaxy M42 5G launch date, a dedicated microsite for this device went live on Amazon India last night. It not just shows off the design but also confirms a few key specs of the device as well. So without further ado, let’s check out the rumored specs and price details for the Galaxy M42 5G:

This smartphone is expected to be a rebranded version of the Galaxy A42 that was unveiled for global markets in September last year. If that’s the case, we already know the complete specs sheet of the Galaxy M42 5G.

Samsung has already confirmed that the device will have the Snapdragon 750G chipset under the hood. You will also find 4GB of RAM and 128GB of internal storage (expandable up to 1TB) onboard. Galaxy M42 5G will also include a huge 5,000mAh battery with 15W charging support.

On the front, the Galaxy M42 5G will feature a 6.6-inch HD+ AMOLED display if the company decides to simply rebrand the Galaxy A42. Samsung will most likely upgrade this to a Full-HD+ panel, as it did with the Galaxy A32 4G that was launched in India earlier in February. You will have an in-display fingerprint scanner and a 20MP selfie sensor onboard as well.

Turning our attention to the rear, the square quad-camera module features a 48MP primary sensor, an 8MP ultra-wide lens, a 5MP macro lens, and a 5MP depth sensor.

As per a recent IANS report, the Galaxy M42 5G will be priced between Rs 20,000 and Rs 25,000 in India. It will compete against the likes of Mi 10i and Moto G 5G. both of which are also backed by the Snapdragon 750G chipset, in the country. Are you looking forward to this budget 5G smartphone from Samsung? Let us know your thoughts in the comments below.