Samsung’s budget smartphones haven’t really been exciting, since forever, but that’s about to change. Samsung has launched the new Galaxy M series of smartphones, and well, we have the Galaxy M20 here, so let’s take a look.

Before we dive into how the Samsung Galaxy M20 performs in everyday situations and whether it’s worth the hype, let’s take a look at the specifications of the phone. 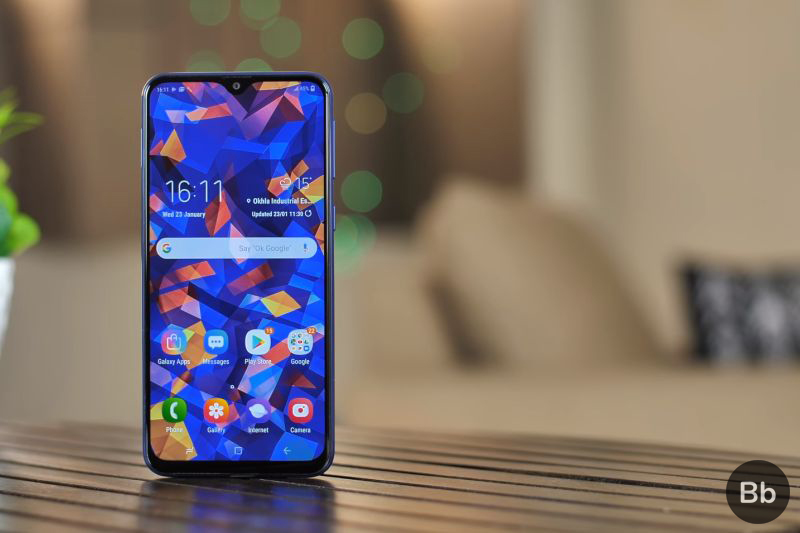 The M20 will compete against the likes of the Asus Zenfone Max Pro M2 and the Redmi Note 6 Pro in India, and here’s what it brings to the table in terms of hardware:

So these are the specs and here’s our video with our first impressions of the Galaxy M20. Scroll below to read our thoughts on the phone too.

The Galaxy M-series is the first time Samsung has incorporated some kind of a notch, and I am glad they went with this teardrop notch, since it’s definitely better and less intrusive than other implementations. 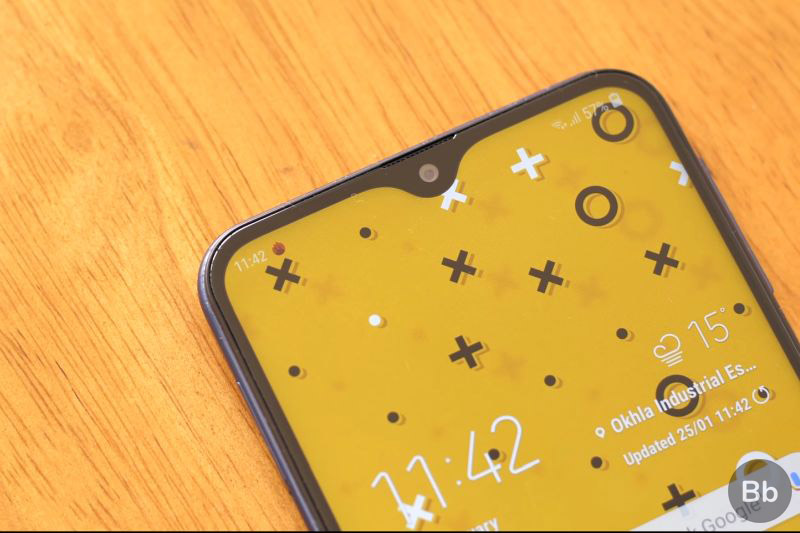 Samsung calls it the Infinity V design, which is just a fancy name for this notch. Anyway, the front here is almost bezel-less, as you can see, since the chin is pretty small too, and well, it looks beautiful. The display here is a 6.3-inch FullHD+ TFT display here with Asahi Dragon Trail Pro glass and well, so far, it seems great. It’s vibrant, the contrast is good, and it seems fairly bright. I know it’s not AMOLED, but maybe we will see an AMOLED display in the M30, or M40. The phone has the Widevine L1 license for HD playback on Netflix and Amazon Prime Video, so that’s great. 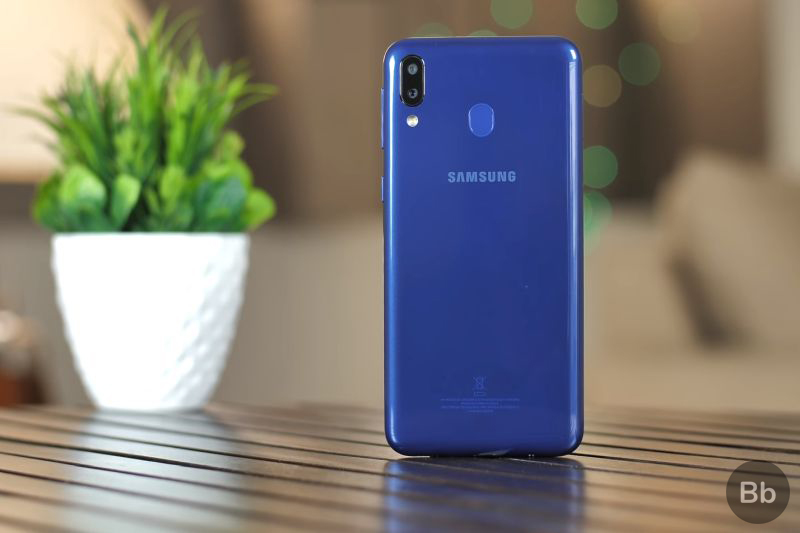 It’s a pretty striking looking smartphone, at least from the front. But the Galaxy M20’s back reminds you of your usual budget Samsung smartphones, with its plastic bland design. It’s just not attractive enough, especially when you put the M20 against the likes of say, the Redmi Note 7, the ZenFone Max Pro M2 or the Honor 8X. As you can see, the glossy plastic back of Galaxy M20 just fails to stand out.

However, moving on from the looks, the design here has pretty much everything. There’s the fingerprint scanner on the back, which seems fast enough, but so far, it has been a little awkward to use, thanks to its high position on the rear. Let’s hope I get used to this. There are also the usual buttons, the triple slot for dual SIMs, and microSD, and on the bottom, we have the headphone jack and the USB-C port, which means faster charging and faster data transfers. Well, it just shows that Samsung has heard the feedback, so I definitely like this. Lastly, the Samsung Galaxy M20 also has dual VoLTE support to round off the good set of connectivity features. 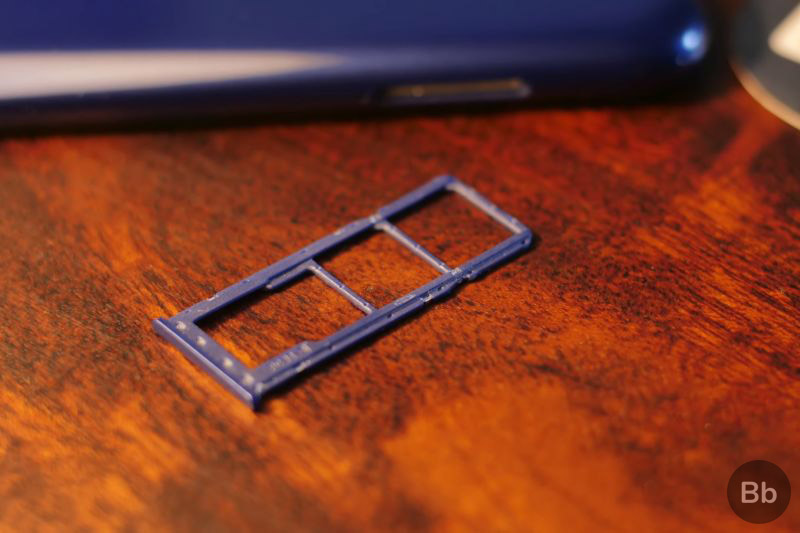 Overall, the design on the new Galaxy M20 seems great. Yes, the back is fairly bland and unattractive, but the front looks beautiful, and unlike its past budget phones, it’s got almost everything. Yes, there’s no notification LED, but I guess that’s a sacrifice Samsung made with the Infinity V notch.

Moving on to the performance now, and honestly, this is the area where Samsung’s budget phones in the past have been terrible. The new Galaxy M20 packs in the new Exynos 7904 octa-core chipset with up to 4 gigs of RAM. We have the 4GB RAM variant of the phone, and well, let’s start with the benchmarks. 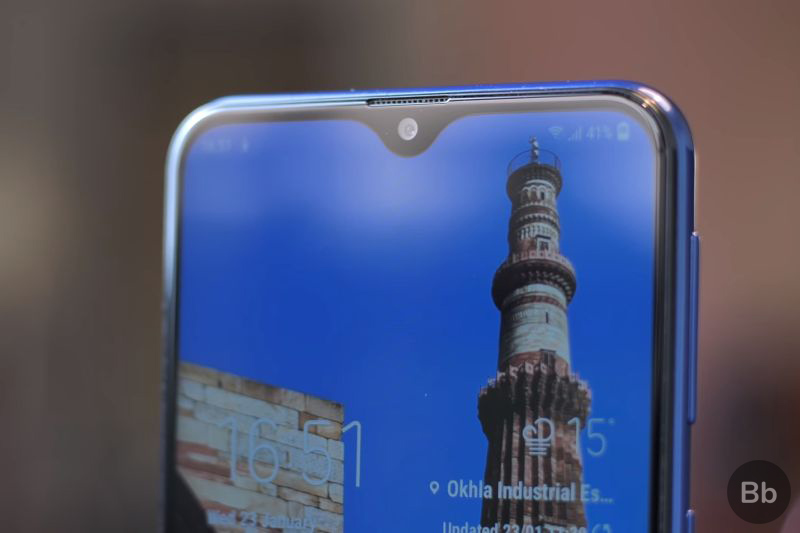 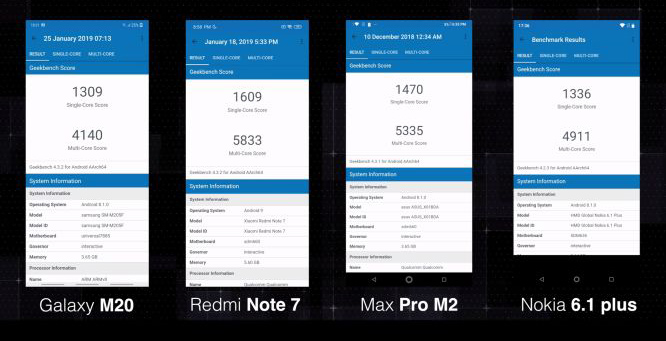 In the Antutu scores too, the M20 scores fall behind. But I will reserve my final verdict on the performance for our review, after I have used the phone extensively.

Anyway, in my brief usage of the phone, usual day-to-day tasks have been smooth, and even the gaming performance has been fairly decent, be it while playing Asphalt 9 or PUBG Mobile. And if you are wondering, here are the default graphics settings of PUBG Mobile in M20. The performance has been good but the biggest issue in the Samsung budget phones in the past when it comes to the performance was Experience UI. 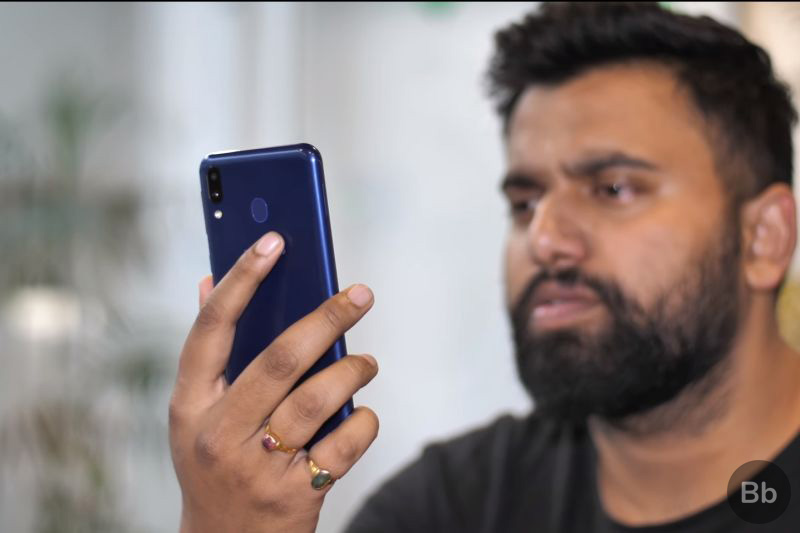 The Galaxy M20 comes with an optimized Experience UI 9.5 on top of Android 8.1 Oreo and it’s said to be a cut down, refreshed version of the UI. Well, we will have to see about that, but when it comes to features, there’s no Bixby here or Samsung Pay, but you get features like face unlock, which works well, and shows this really cool effect around the notch when unlocking the phone. It’s cool, right?

Experience UI 9.5 also features navigation gestures from OneUI, which are basically three swipe gestures to replace the three buttons at the bottom. I am not a big fan of these gestures, but it’s fine. There’s also the Game Tools feature, which brings various shortcuts you can use during gaming to record gameplay, take screenshots, lock navigation buttons and more.

Yes, the benchmark scores are underwhelming and yes, even though the phone has an optimized Experience UI 9.5, it is still Experience UI. We will reserve our final verdict on the performance and software experience for our full review. 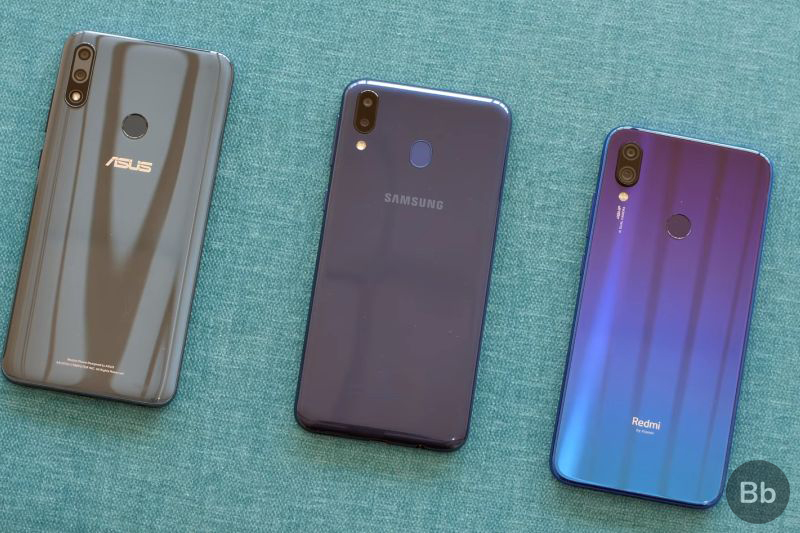 Let’s get to the cameras now, which has traditionally been the strong point of Samsung budget phones. The Galaxy M20 features a 13MP f/1.9 primary sensor with a 5MP f/2.2 ultra wide sensor, and it has all the Samsung features, like the Live Focus mode, which is basically the Portrait Mode, the Beauty mode, the Pro mode and more. Well, here are a few shots I took from the Galaxy M20. 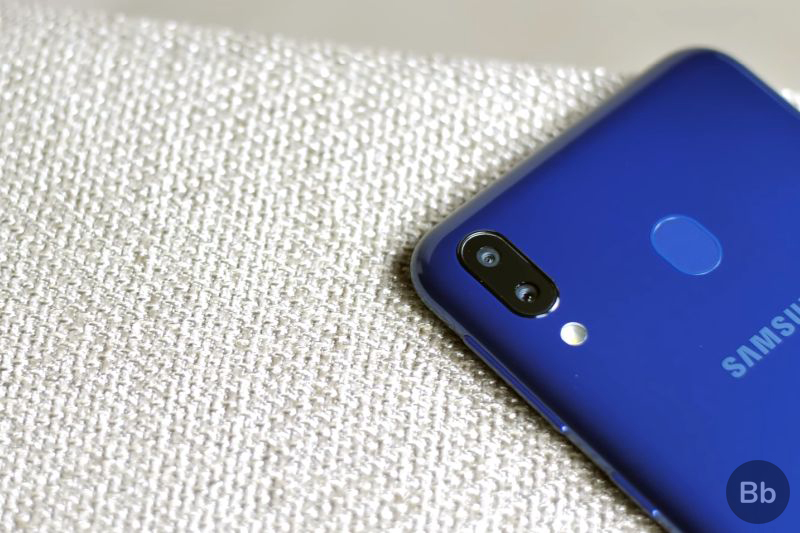 Well, the photos from the M20, be it in the usual mode or portrait mode, look fairly good so far. Plus, there’s the wide-angle lens, which results in some really cool photos, so there’s that, but ya, when it comes to the verdict on the camera, it’s a little too early to judge.

When it comes to videos, the phone does not feature 4K video recording support, which is weird since Exynos 7904 has support for it.

Switching to front for selfies, the Galaxy M20 features an 8MP f/2.0 selfie camera and it has got all the features as well, like the live focus mode.

I am confident about the cameras on the Galaxy M20, but it will be interesting to see how it fares against the Redmi Note 7.

Then, there’s the battery, and well, it’s impressive. The Galaxy M20 packs in a massive 5,000 mAh battery, that should last you a couple of days with ease. 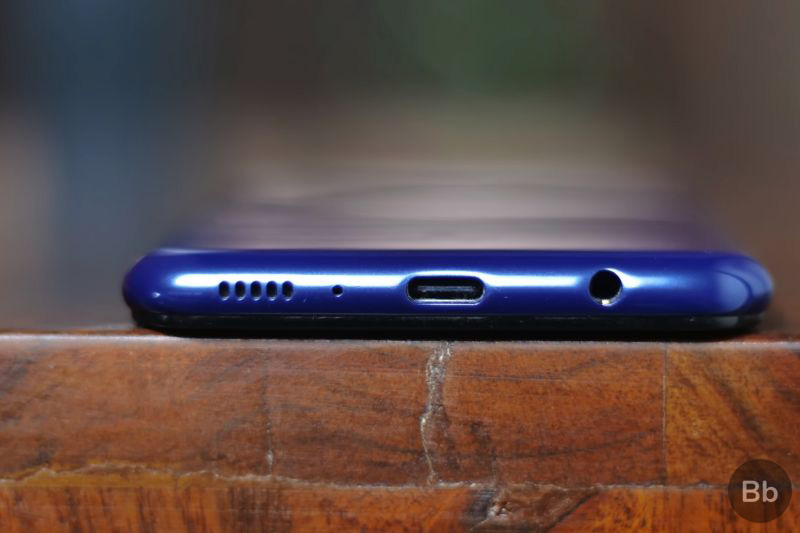 Plus, there’s fast charging support on board, and unlike other manufacturers, Samsung has bundled a 15W fast charger in the box, which deserves kudos.

Having taken a good first look at the new Galaxy M20, one thing is pretty clear: Samsung has listened to the feedback from the consumers and brought a budget smartphone that kind of fixes most of the issues. 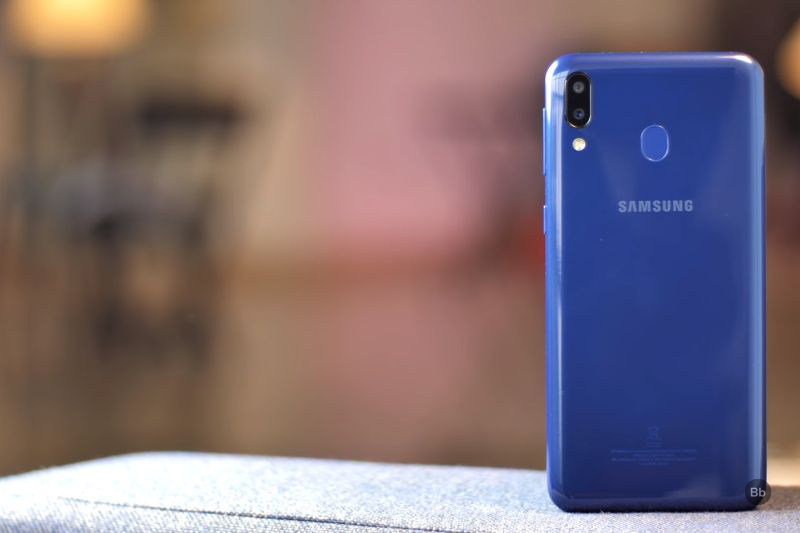 The M20 has a modern display, capable cameras, a massive battery, USB-C fast charging with a fast charger in the box, and a new, refreshed Experience UI. It’s still not perfect. The design seems rather bland, there’s still Oreo on-board with leaks suggest the Pie release to come in August and I am not sure if the M20 will be able to match the competition when it comes to the performance. 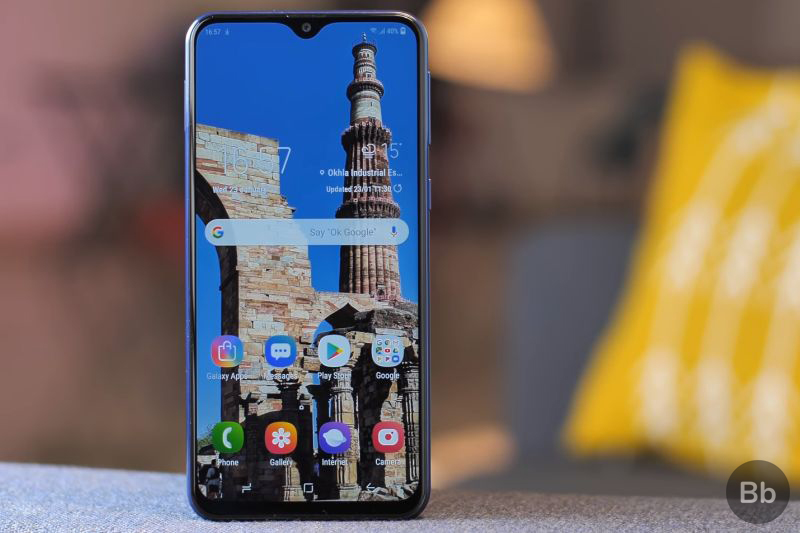 At least Samsung is making an effort, unlike the J-series days, and well, that is commendable. Our M20 review will arrive soon, so if you have any questions on the phone, just drop them in the comments below, and we will make sure to answer them in our full review.